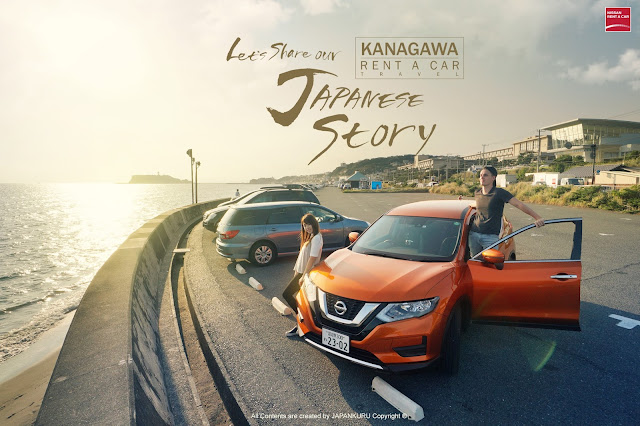 Driving through the Kanagawa Area

Where is and What's in Kanagawa?

Kanagawa Prefecture is a city in the suburbs of Tokyo,
and is filled with popular tourist spots!
It has a totally different feeling to it compared to Tokyo!

Some of the main places people like to go visit include
Yokohama (横浜), which is a port city,
Hakone (箱根), famous for its hot springs,
Kamakura (鎌倉), known for its history and culture,
and Shonan (湘南), loved for its beaches. 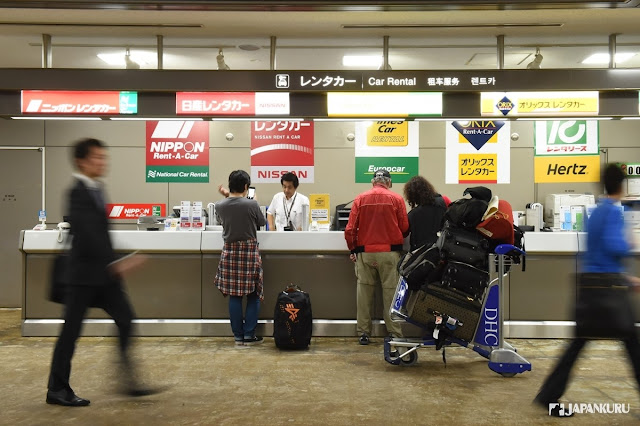 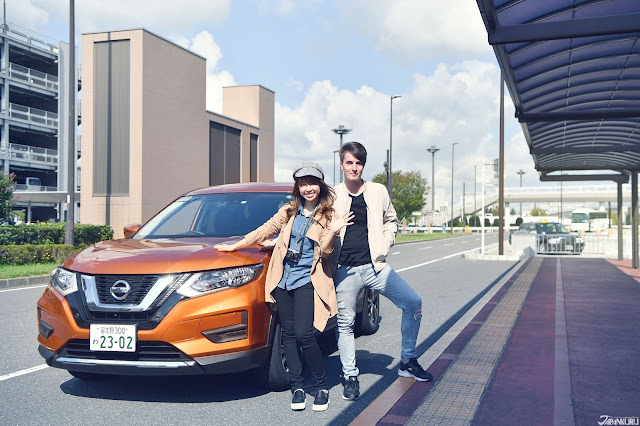 ❶ Which Side to Drive on

An ETC Card enables you go through toll booths
quickly and easily.
It's really nice because nothing is more of a pain
then scrounging around for change for the toll.
The toll will save on the chard,
and once you return the car you pay the toll fee then!

*Side note*
ALL cars include a navigation system
that is available in many languages.
The staff can set up the language you desire
for you before departure.
When adding an a specific address,
it's recommended to enter the destination's phone number
or map code for accuracy.

You will get the car with a full tank of gas,
and are expected to return it the same way out of courtesy.

There are three different types of fuel,
and this is the one time "green means go",
doesn't apply.
Whatever "light oil" is,
you don't need it!
The only gas you will need is from the red tank,
unleaded.

*You will be asked to show the receipt
from the gasoline station or other proof of purchase.


If you do not return the car with a full tank,


you will be asked to pay a fuel surcharge based on the distance driven.

When it's time to return the car,
you just need to signed documents from when you received it.
A staff member will check the car for dents/scratches
and to make sure you have all of your belongings.
If you have any other fees (like the ETC Card),
you will pay them here.

You can easily go all around Kanagawa by train,
but this time we wanted to do something different
and decided to rent a car and go driving around Kanagawa!
It was a nice change of pace. 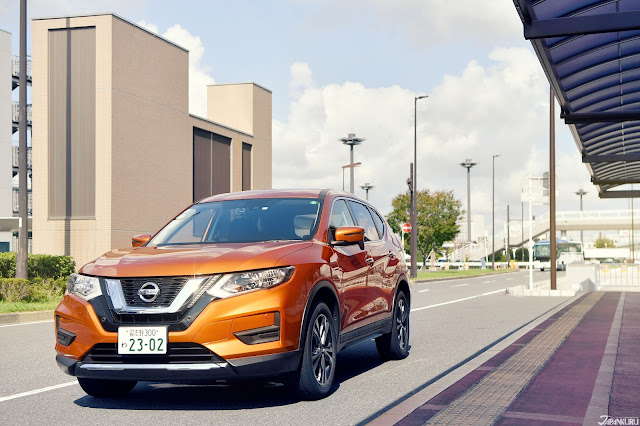 We ended up getting a SUV, X-TRAIL
which seats 5 people.
It was super spacious and sooth when driving.
Plus it's a hybrid!
So that was a nice plus! 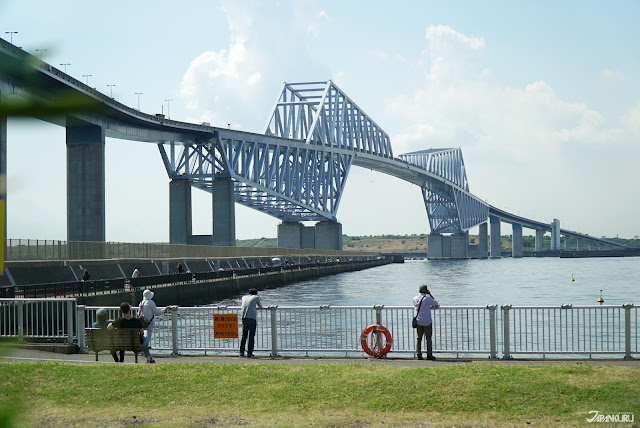 Tokyo landmarks like Tokyo Tower and Tokyo Sky Tree are well known!
One landmark that may not be so known to non-Tokyoites is the Tokyo Gate Bride!
This spot at Wakasu Seaside Park is said to be the best place to see it. 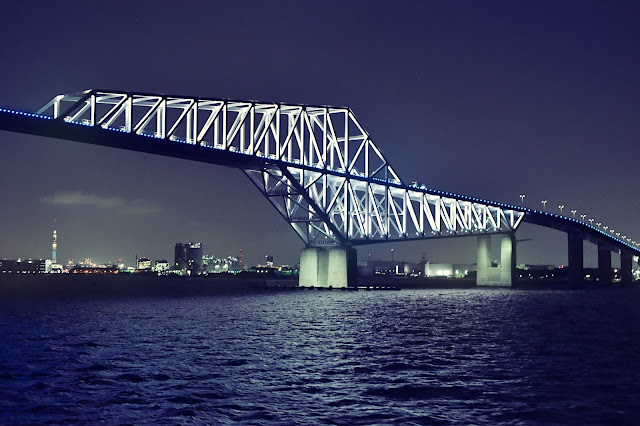 The Tokyo Gate Bridge is also called the Dinosaur Bridge
because its structure "looks like two dinosaurs facing each other".
Some people don't know though that there
is a specific reason for it's interesting structure.
The height of the bridge had to be restricted to less than 100m (328ft)
because it's so close to Haneda Airport
and aircrafts fly low over this area.
At the same time,
the bridge had to be high enough for the ships to pass underneath it.
Hence one area of the gate is on top,
and the other on the below.

In addition to the Tokyo Gate Bridge,
there is a beautiful view of Mt. Fuji (if the weather allows it).
Even more,
Tokyo Gate Bridge connects Wakasu Park to Odaiba and Tokyo Bay.
It's about 25.1 km from Haneda International Airport
and about 11.5 km from Tokyo Disneyland!!
So when you're renting a car,
you can go to Tokyo Disneyland in no time!
MUCH less tiring compared to the train. 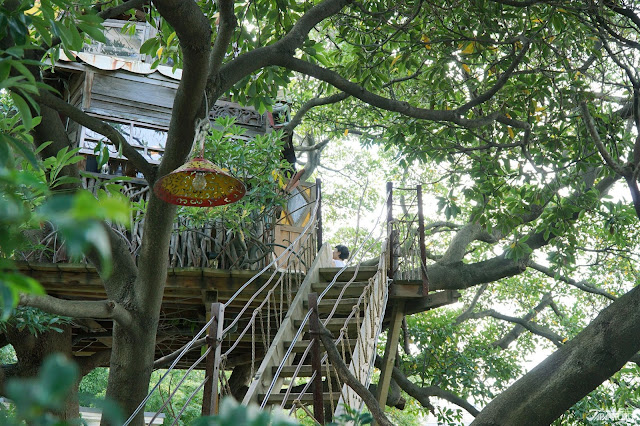 Many people have great memories of climbing trees
or having tree houses as a child.
However in Japan,
trees aren't something you normally see in the city.
Here though, you can go back into your childhood
or experience something you never got to,
and relax in this unique tree house cafe.

There are all kinds of yummy foods and drinks
to go with the naturistic theme. 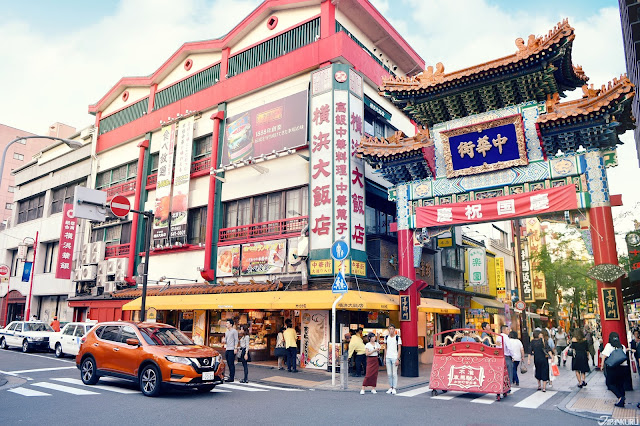 Located in central Yokohama,
this Chinatown is one of the most visited places
in Yokohama!
In the mid 1800's,
Yokohama was a huge port for foreign trade
and Chinese traders eventually started settling here.

Now the area is filled with a number
of Chinese stores and restaurants.
One restaurant that is said to have the best steamed buns
in Yokohama Chinatown,
and that restaurant Houtenkaku Shinkan (鵬天閣 新館).

Like most of Yokohama,
Yokohama Chinatown is most beautiful at night!!
The Zenrinmon Gate is known to be the symbol of Chinatown,
so be sure to stop by! 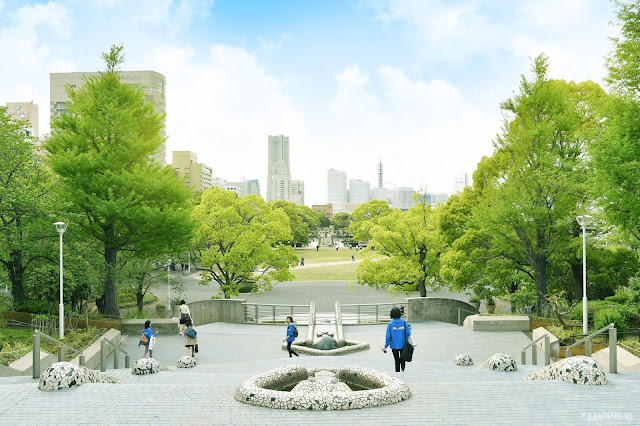 Just straight from Chinatown and
along Yokohama's waterfront is a public park.
It's pretty busy and on the weekends
you will often see street performers! 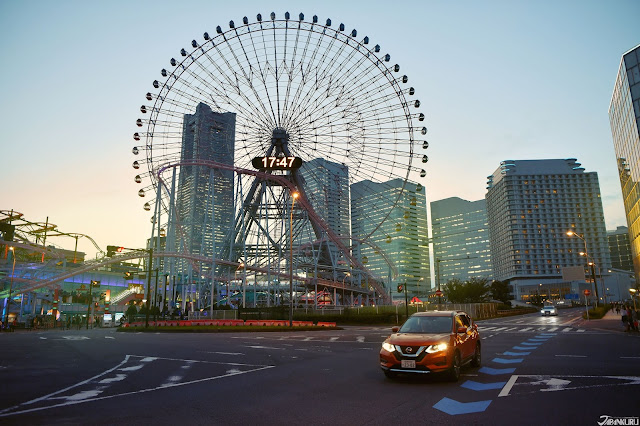 Minato Mirai 21,
meaning "Port of the Future (in the) 21(st century)",
is a popular business district that contains all sorts of attractions. 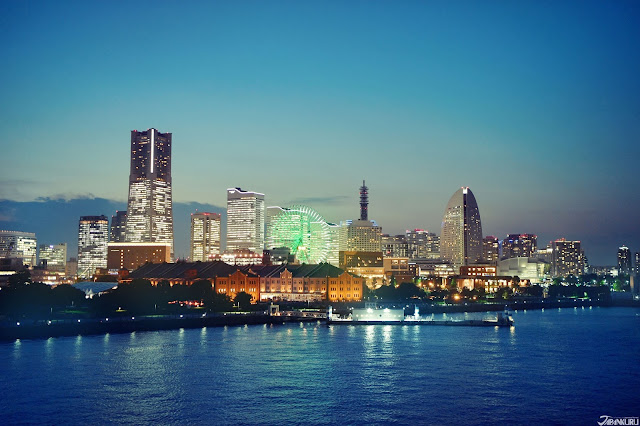 Despite its modern looks,
Osanbashi Pier is the oldest pier in Yokohama
(constructed in the 19th century).
During the day it may not be so much,
but at night it's the best place
to get an up close look to Minato Mirai!

From Unga Park you can see Cosmos Land
and known as Yokohama's perfect date spot.

The Manyo Club is an unique hotel
that has a natural hot springs on the roof!
It's the ultimate way to relax and enjoy the beautiful city lights.
Normally most people would think this place
would be expensive,
but it's actually cheaper than other hotels!! 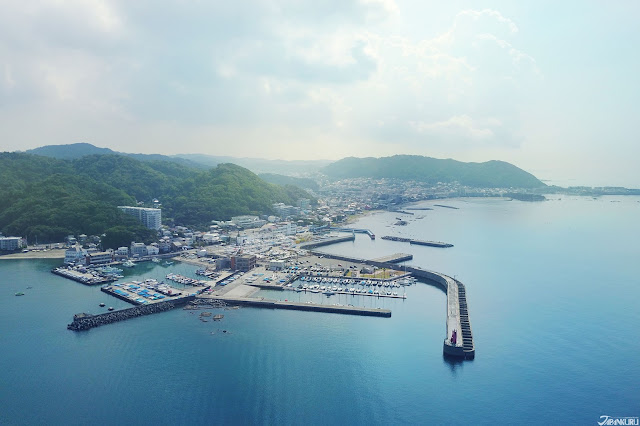 The second day of our Kanagawa road trip was outside of Yokohama.
Our first stop was Hayama Marina,
which is known for its yearly yachting competition.

It's here that you really sense the differences between
Tokyo and Yokohama. 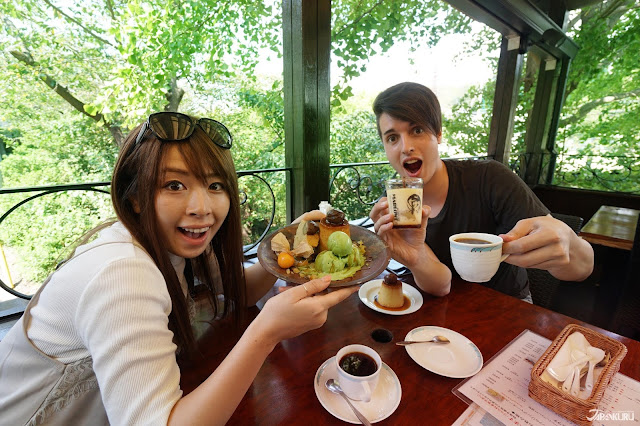 With only 7 shops in Japan,
this Kanagawa original cafe is LOVED
for it's huge and caramely Japanese pudding
(basically like creme brulee).
200ml (1 cup) beaker that is 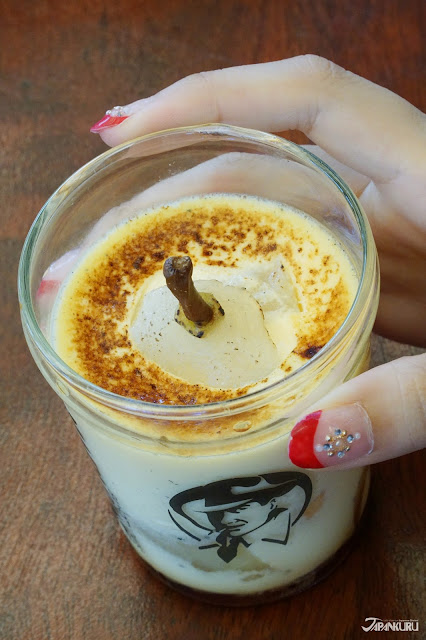 Of course the Marlowe pudding made from fresh ingredients,
so it's a bit expensive compare to your regular Japanese pudding
(500 yen).
But if you get take out,
you will be able to take the beaker home with you!
So it's like a 2-for-1 deal.

There are pleanty of flavors
and all can be enjoyed either at the cafe or some place else.
HOWEVER!
If you are wanting the glass beaker,
you will need to order from the take-out menu. 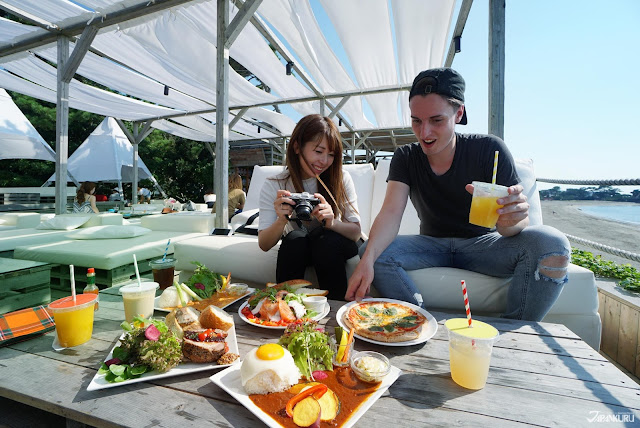 Along the Shonan coast is an open air restaurant/cafe.

There are sheets on top to create shade,
it can still get really hot.
Thus if you have any added protection,
we recommend using some!

We were really surprised by the beautiful arrangement.
The view of the ocean nearby made it as if
we were at a tropical resort.

Places Called "The Oasis of Tokyo"
Enoshima, Kamakura (江の島、鎌倉)
Afterwards we drove along the Sagami Bay coast
of Kanagawa Prefecture behind Hayama.
Along with its historical culture,
Hayama is a popular resort area with a coast.
Even the Japanese Emperor and his family
have a summer home here!

Kamakura (鎌倉)
Kamakura is one of the most popular tourist destinations in Japan.
What was once a very important part of Japan for the shogunate,
Kamakura has so much history and culture
it is often mentioned as a "mini-Kyoto"!
The Great Buddha is one of the most famous monumental statues
in Japan, but another GO TO place in Kamakura
is at Kamakura Koko-Mae Station (鎌倉高校前駅).
For you Slam Dunk anime/manga fans,
you might recognize the picture above on the left
from the Slam Dunk opening!

Enoshima (江ノ島)
Enoshima is the perfect place for a little fun in the sun!
It's a small island off the coast of Kamakura
and in the summer many people go to play at the beach.
Near by are aquariums, temples,
and an observation lighthouse
that over looks the Sagami Bay.

Hakone (箱根)
Enoshima and Kamakura are of course famous 1 day trips,
but if you widen your journey a little further you can go to Hakone,
one of Japan's leading hot springs.
Since we went by car,
it wasn't near as much as a hassle
as it would have been if we took a train.

By renting a car to go around Kanagawa
it made seeing a new side to the area
even easier and more enjoyable!
Especially since things are a bit more spread out
in places that aren't Tokyo.
Road trips are super fun,
and recommend people trying it at least once
when they go abroad ^-^

🚙 Road Trippin to the Best Attractions in Kagoshima, Japan 🚙