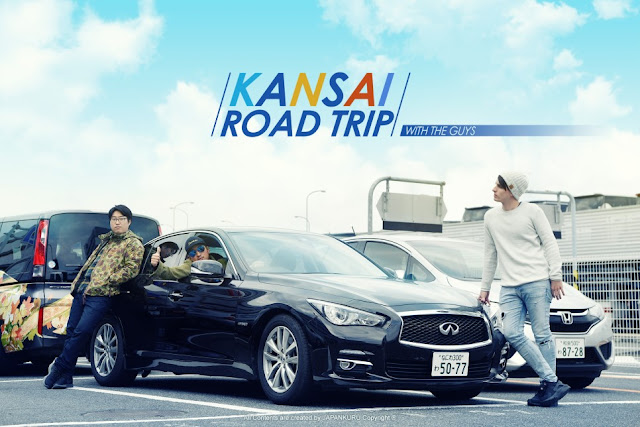 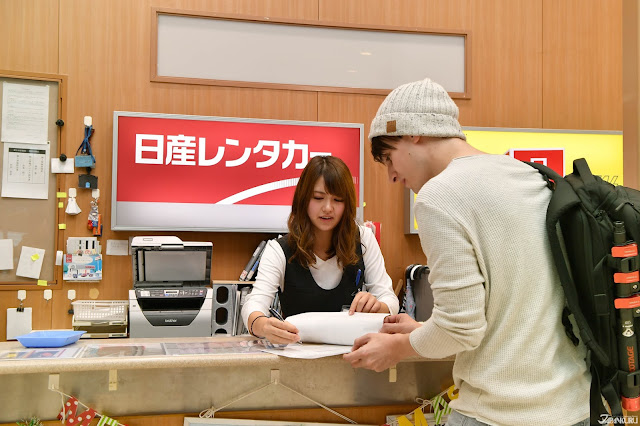 The Car We Got, SKYLINE 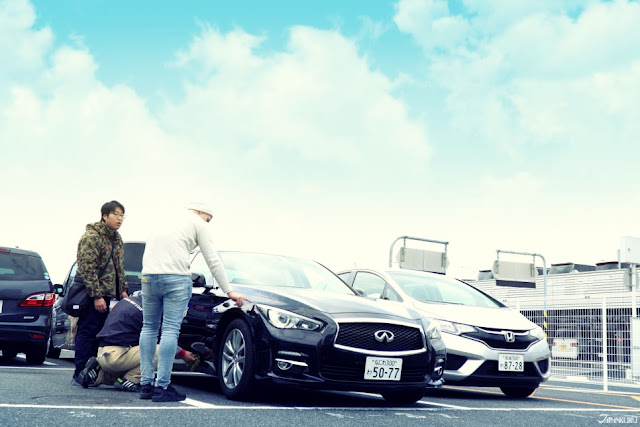 Once you've filled out a form just giving basic information,
the Nissan staff will go out with you to check the car for scratches and whatnot.

We got the Nissan Skyline Hybrid and it was super smooth and easy to drive.
It also had plenty of leg and trunk space which is an added plus. 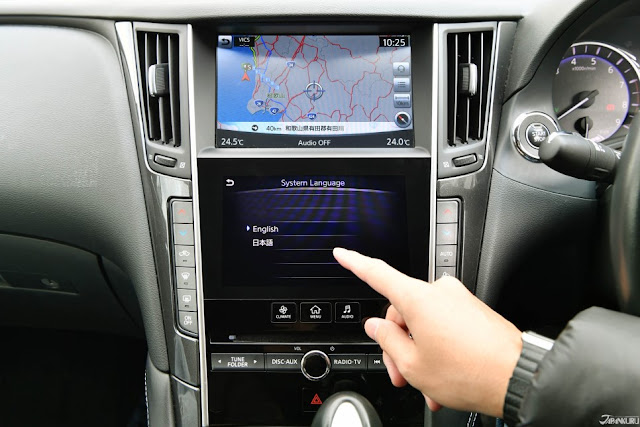 It's also very important to mention that
ALL cars include a navigation system
that is available in English, sometimes a list of other languages.
The staff can set up the language you would like before you head out.
When adding a specific address,
it's recommended to enter the destination's phone number
or map code for accuracy.
However, we realize that is not always accessable. 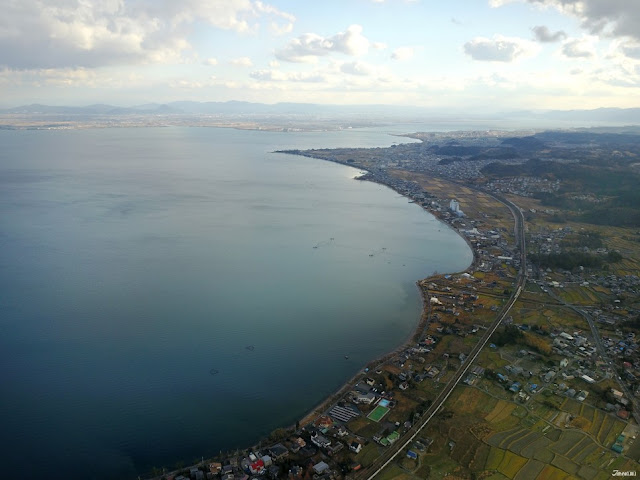 Difficult to tell by the picture above,
but Lake Biwa (Biwa-ko in Japanese) gets its name from the Japanese musical instrument the biwa because the lake resembles the instrument in shape. 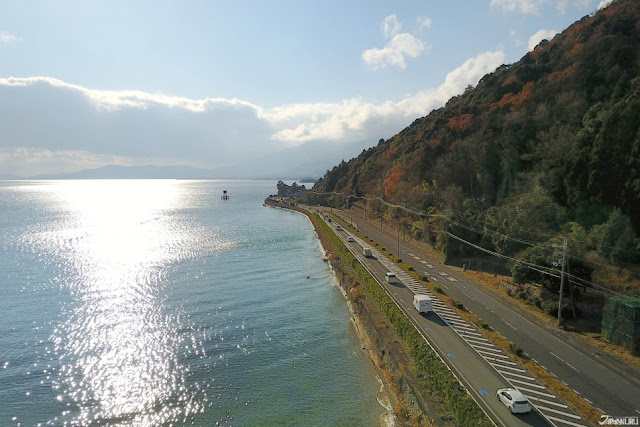 Being one of Japan's largest freshwater lakes,
Lake Biwa is known for being a breeding ground for
freshwater fish and even pearls. 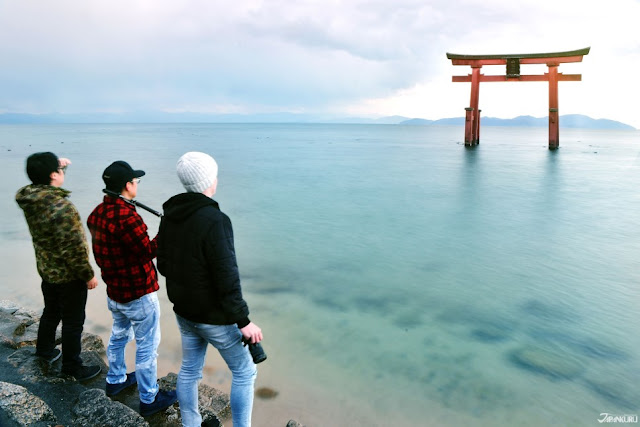 Shirahige Shinto Shrine is along the road Route 161.
Its huge red torii stands in the lake across from the shrine.
The main building of the shrine
is appointed to the national important cultural property. 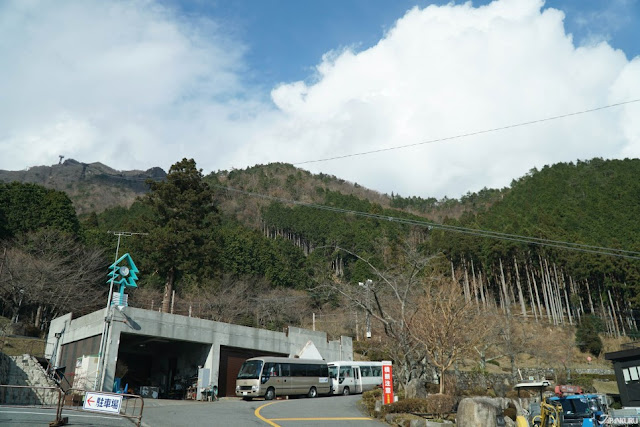 Biwako Terrace is located around the ropeway summit station of Biwako Valley.Since we took it car,
It was about 40mins via Kosei Rd. from Kyoto Higashi I.C. of Meishin Expressway. 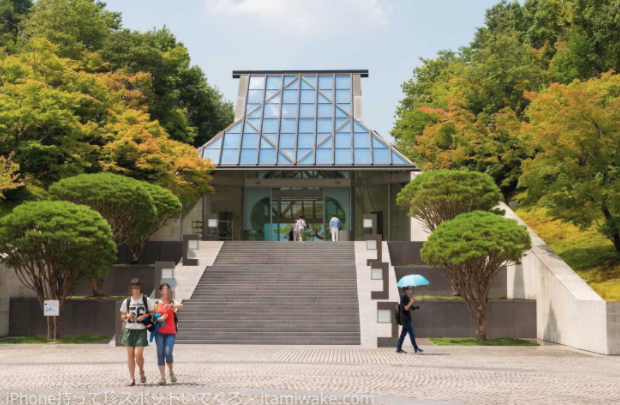 The Miho Museum has a wide range of art collections
and is surrounded by such great nature and hills.
It is one of Japan's hidden gems, so going here is really fun.

What makes Miho Museum special from other museums is that it is over half of the museum is sunken under the surface of a mountain.If you go in the morning,
your pictures will turn out better due to the small number of people and
of course sun exposure on the mountains and trees. 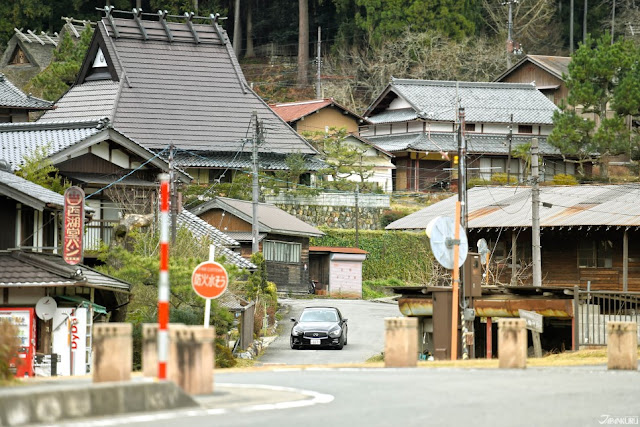 Kayabuki no Sato is famous for the hundreds of traditional,
thatched roof (kayabuki) farmhouses.
What's different to this historic town compared to other is
that people still live in a good amount of these old houses.
Since many of them are private houses and building,
you can't enter a lot of them,
however there are a few that you can.
To turn it up a notch,
there are even some thatched roof houses that allow you to stay overnight!
There you can sleep on a tatami floor inside Japanese futon.
The ultimate Japanese experience. 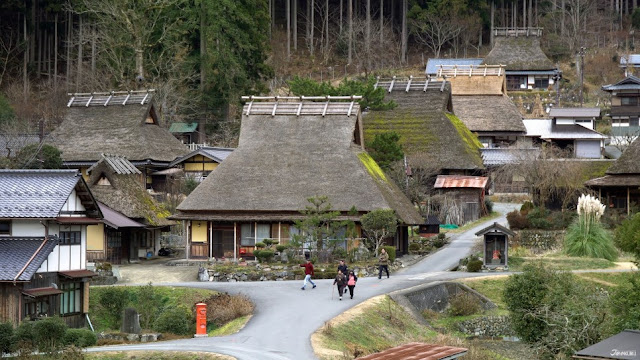 Among the little village is a museum that's open to the public,
the Kayabuki no Sato Folk Museum.
There you can see the traditional lifestyle and even
explanations on the construction and maintenance of the thatched roofs. 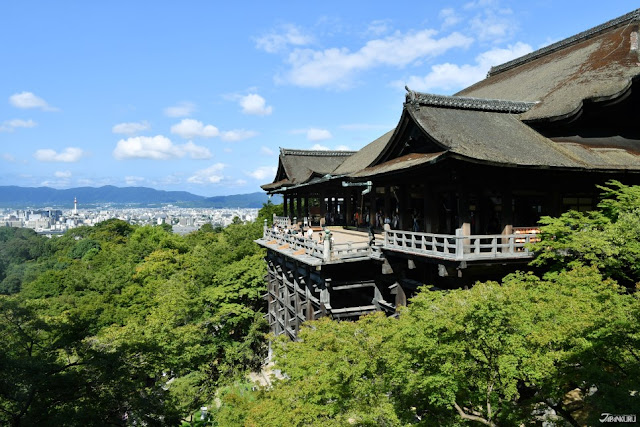 If you go to Kyoto and don't stop by Kiyomizudera,
it's like you didn't really go to Kyoto.
This temple is one of the most known and photographed temples in all of Japan,
partly because it is associated with one of Japan's oldest forms of Buddhism.
Another is because it is just a beautiful sight that incorporates Japan's tradition and four seasons.
The name of the temple literally means the "pure water temple",
which is said to be from the waterfall that flows down below the shrine.

In addition to Kiyomizudera,
there are a lot of old-fashioned buildings and shops lined up nearby. 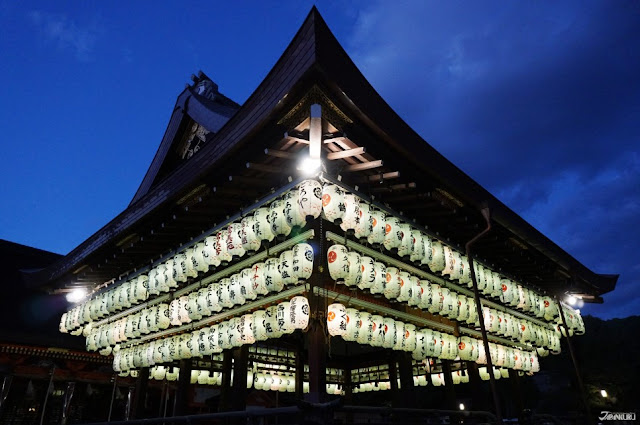 It is really close to Kiyomizudera, you can easily get there on foot. 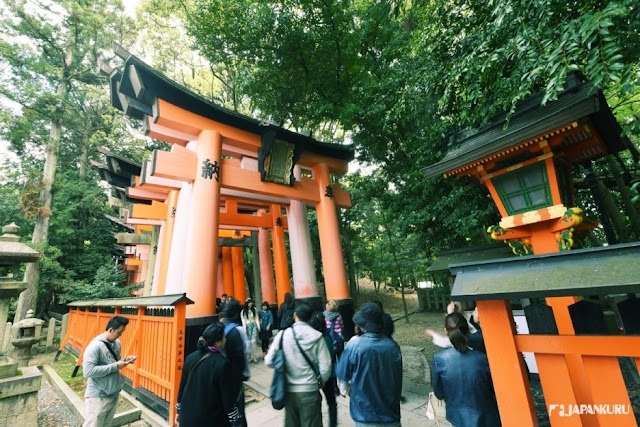 If you've seen the movie, Memoirs of a Geisha,
then you've seen Fushimi Inari-taisha.
It is a bit out of the way, further from many of the "main" Kyoto attractions,
but it is so beautiful we really do recommend taking the trip out there. 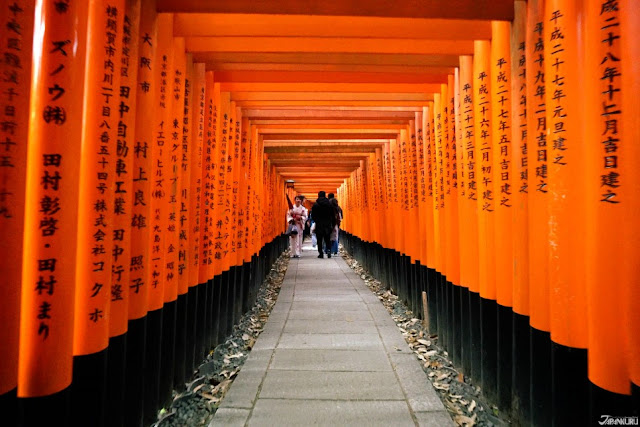 There are thousands of bright red torii gates lined up and leads to a mountain
and shrine that is dedicated to the god of rice. 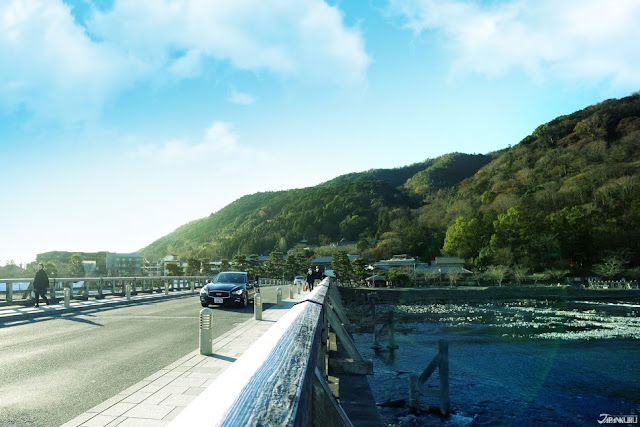 From there we drove over the Katsura River
on the Togetsukyo Bride to Arashiyama!
It's worth mentioning that the Togetsukyo Bridge isn't just any bridge,
but was originally build during the Heian Period (794-1185)
and is one of THE best places in Kyoto for viewing cherry blossoms🌸

The bamboo groves or bamboo forest that is a part of Arashiyama
is becoming more and more popular among foreign tourists.
The subtle wind blowing through the bamboo branches
makes a nice short video.
It's said many of the bamboo from Arashiyama is chopped down
and used to manufacture tatami mats, boxes, and other bamboo goods.
So when you're shopping,
keep an eye out for some Arashiyama bamboo products! 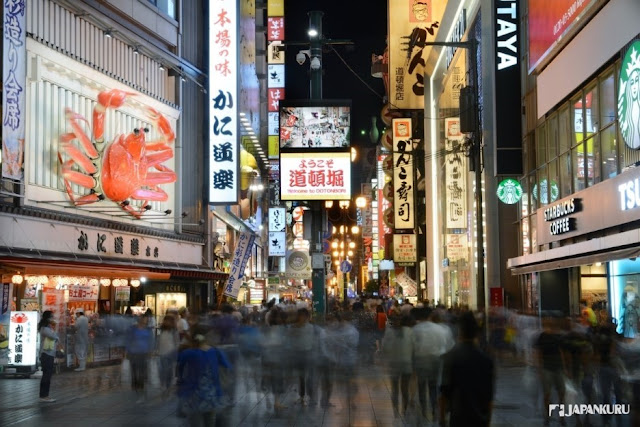 If you ask a Japanese person where you should eat in Osaka,
they'll most likely say "in Namba!".
Dotonbori, or Namba, is one of Osaka's most famous shopping
and dining districts. 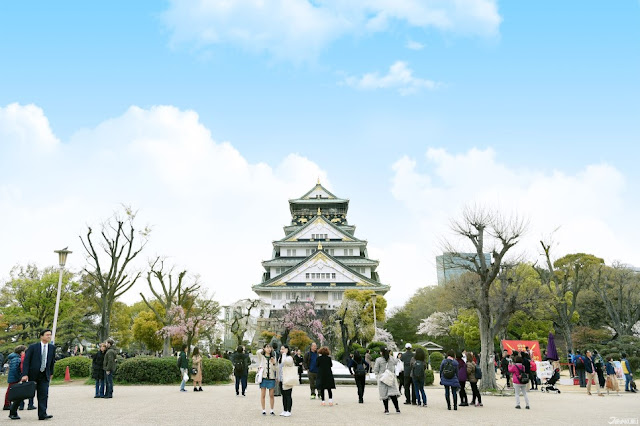 For a place of more traditional history,
there's Osaka Castle.
Around Osaka Castle is a lovely park filled with beautiful flowers and trees.If you happen to be in Osaka during cherry blossom season
or in the fall when the leaves are changing,
we recommend stopping by here for some stunning pictures! 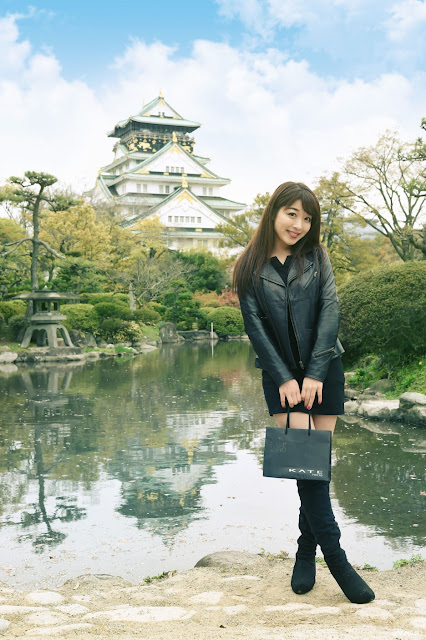 Here, in the Japanese garden is said to be the best spot for seeing
and taking a picture of the castle. 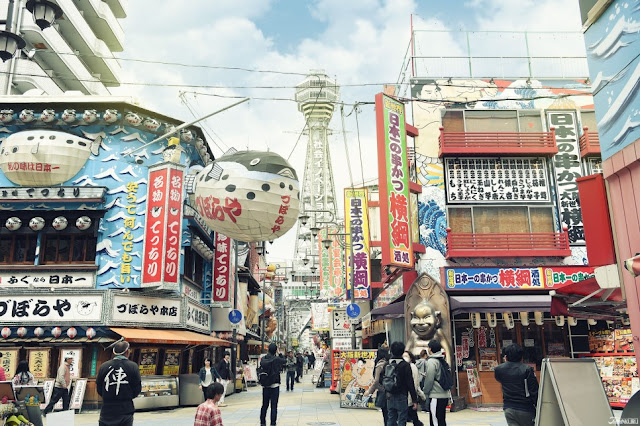 Wanna go out for a night on the town in Osaka?
Well, Shinseikai is your place!
The closest thing you can compare it to is Tokyo's Kabukicho (in Shinjuku).
Lots of bars, food stands, spas,
and walk a bit and you'll be sure to run into some ladies of the night.
There is a lot of history here though.
It was developed before the war and just sort of remained as is ever since.
Which is a bit funny because "Shinseikai" means "New World".
You will see a lot of older yet lively looking buildings,
something really special to Shinseikai.
There you will also see the observatory tower Tsutenkaku. 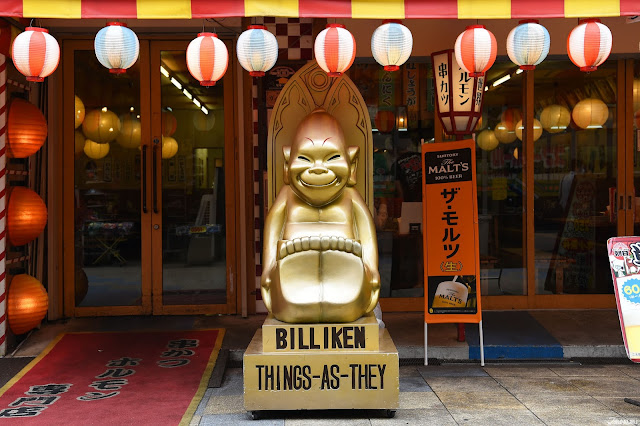 This little...big footed elf looking thing is Billiken.
This statue is sort of like the Hachiko of Shinseikai.
However not many people know,
Billiken isn't Japanese (as if the name wasn't obvious)!
Known as "The God of Things as They Ought to Be",
Billiken originally was created by an American art teacher in Kansas City,
and became the mascot of St. Louis University.
It wasn't until sometime before WWII that Billiken made its way to Japan.
Now it is a symbol of good luck and is believed
that you will get good luck by rubbing Billiken's massive feet.

Renting a Car and Traveling Through Japan
Kansai Road Trip 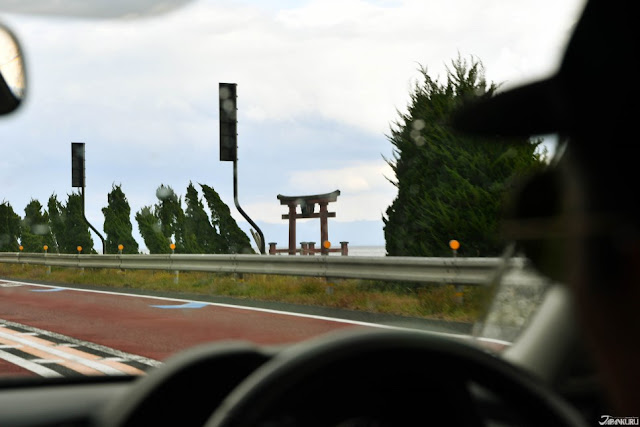 There is SO much more to Kansai than the places and things
we introduced this time.
It really is so hard to fully explain how cool the Kansai region is
and how different it is from Tokyo.
If all fails,
hopefully, after reading this blog article you'll gain some interest
in the cool sides of Kansai!