Before arriving, lots of visitors to Tokyo imagine it as a bit of a futuristic wonderland. But many parts of the city still beat with the heartbeat of Edo Period Japan, and Tokyo's Shitamachi has plenty of that old-school charm. "Shitamachi" refers to half of old Tokyo, the half that used to be for working-class citizens. With the footsteps of locals through the centuries, tons of interesting history is beat into every street corner. We wanted to spend a day exploring the area, and the Tsukuba Express high-speed train line had us across the city in minutes. Come with us as we check out Asakusa and Kita-Senju! 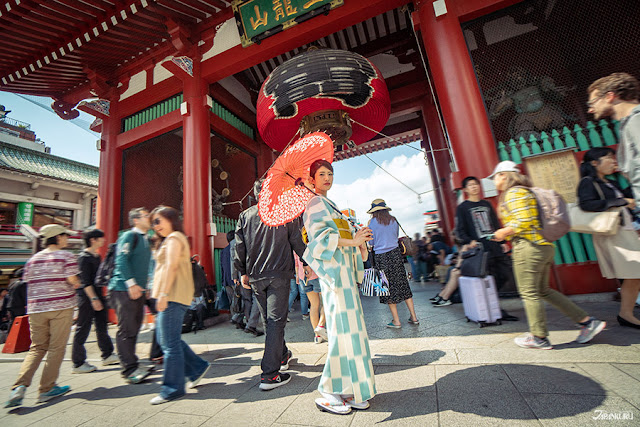 Have you heard of the Tsukuba Express Line?

It's a high-speed railway that runs between the Akihabara neighborhood of Tokyo and Tsukuba, Ibaraki Prefecture, passing through Chiba on the way. From one terminal to the other, the Tsukuba Express runs 58.3 km (36 miles) in length, and stops at 20 stations, all in under an hour. From Akihabara, you can get to Mt. Tsukuba (one of Japan's "100 most beautiful mountains") in less time than it might take you to get from one side of Tokyo to the other. It's not one of Japan's famous "bullet trains", but fortunately it doesn't come with that price tag either, and it's pretty fast! Stay in the cool technology-oriented Akihabara and the Tsukuba Express will take you to Asakusa in just four minutes, and then to Kita-Senju in another six.

We've already written a little about some of the cool places the train line passes through. From the retro Nagareyama, to Mt. Tsukuba, which some visitors even say is on par with Mt. Fuji. And on days when you really want to explore the Tokyo area, Tsukuba Express offers some great deals on day passes, some of which even grant free access to some subway lines.

With everything in English, it's easy to check the map, grab a ticket, and get going.

This time we didn't want to go anywhere outside of Tokyo, though. Even when you're sticking around in the city, the speed of the Tsukuba Express is super convenient. We let it whisk us away on a tour of Tokyo's Shitamachi area!

And we enjoyed the view on the way.

Time to Start Our Day! Heading Over to Asakusa

First Stop: Stepping Back in Time to Edo-Style Asakusa, and Stepping into a Kimono


From that Akihabara hotel of yours, speed right over to Asakusa. The Tsukuba Express station is in a location a little ways away from the rest of the subway lines in Asakusa, as you might have noticed if you've ever hung out in the area. That means you can climb the stairs and find yourself facing the Asakusa Don Quijote (a store that sells just about anything), and wandering down one of Asakusa's old-school shopping streets. If you're there during nice sunny weather, you'll have a hard time avoiding the many kimono-clad pedestrians (often wearing yukata in the summer) strolling through the streets. It's hard to resist joining in the fun! If you want to get in on the kimono experience, we had a good time borrowing one from Asakusa's Aiwafuku kimono rental.

Got your kimono on? Then you're probably ready to see the sights of Asakusa, and be seen in your fabulous get up! The first stop for most visitors is the Kaminarimon Gate at the entrance to Sensoji Temple, from where you can point yourself towards the excited crowd. Even if you've been to the Nakamise shopping street before, with so much going on, it's always worth a repeat visit. International travelers and hundreds of years of Japanese culture work together to make every day feel like a festival (of course, you can also visit the temple when there really is a festival going on, but it gets a little crazy). With so many people there having fun, if you're dressed up in kimono, you might even get some people asking for pictures.

Third Stop: Incense Burning and More at the Temple

You wouldn't know it just from looking, but Sensoji Temple in Asakusa is actually Tokyo's oldest temple! Dedicated to Kannon Bosatsu, for more than a millennium it has been standing guard over the neighborhood. Ieyasu Tokugawa started patronizing the temple when it became a pilgrimage site in the Edo Period, helping Asakusa find great prosperity. Later, though, the area went into something of a recession when the Great Kanto Earthquake caused fires to spread through Tokyo, and then air raids further damaged the city. Thankfully, the people of Asakusa rallied, bringing energy and life back to the area. Sensoji Temple is still around for everyone to admire, and it's not going anywhere.

Before heading inside, rinse your hands with the ladles provided around the fountains, and then check out the huge incense burners. You're welcome to burn a stick of incense if you so choose, but otherwise you can still appreciate the scented smoke like much of the rest of the crowd: use your hands to waft the smoke onto and over your head. It's good luck!

Don't leave the temple without the obligatory temple fortune, or "omikuji." You'll find these little paper fortunes at temples and shrines all over Japan, but Sensoji's omikuji are infamous for being... not very positive. But that just adds to the fun; if your fortune gives you good news, then you know it must be for real!

Fourth Stop: Get Carried through the Streets on a Rickshaw

Getting back to Kaminarimon Gate, you can't miss all the men (and more recently women) lining up ready to take tourists on a ride through town, on their rickshaw! Now's your chance to enjoy this fun, and slightly crazy, experience. Don't try to shuffle through all the crowds in your kimono! Let your friendly rickshaw puller run you through all the little alleys and the bigger avenues, so you can enjoy a break that's both relaxing and exhilarating.

The Sun is High in the Sky, It's Time to Get to Kita-Senju!

Feeling all glammed out from the hours in a kimono? Then grab a quick lunch (Asakusa has lots of monjayaki, the Tokyo version of okonomiyaki), and head back to the TX Tsukuba Express Asakusa Station. Once the train arrives, ride it north and you'll be in Kita-Senju in 6 minutes.

Kita-Senju might not have quite the grand reputation of Asakusa, or the spectacular Sensoji Temple, but what it lacks in visual impressiveness it makes up for in rich history. Thanks to the Mito Kaido, one of the main streets of the Edo period, Kita-Senju been a transportation hub for hundreds of years, making it a popular neighborhood. Modern train lines have taken the place of that historic road, but it's still a destination for movers and shakers.

First Stop: Take a Break & Clean off the City Grime at Takara-yu Bathhouse

Fewer and fewer modern Japanese citizens take advantage of the luxury of public bathhouses (called sento, 銭湯 in Japanese), preferring the convenience of the bathtub in their own home. But the culture hasn't quite died out yet, and Kita-Senju is still a harbor with a few interesting sento still holding out, open for use. Don't be worried about bathing naked with strangers, it's a liberating and fun experience, and one that's worth trying in Japan.

One of our favorite sento in Tokyo is Takara-yu, which is in a building almost 100 years old. They've maintained an old-fashioned open-air porch, which looks out onto a nice little traditional garden, and it's a perfect place to hang out post-bath. After warming up in the hot water, the cool breeze is very refreshing.

Need some extra toiletries? Find them for sale at Takara-yu's retro entrance.

A calming view of Mt. Fuji hangs overhead while you bath.

For whatever reason, Japanese people have developed a tradition of drinking chilled milk after a bath. We're not sure where this particular bit of culture originates, but you may as well join in while you hang out on the breezy porch.

Second Stop: When the Sun Sets, Stroll down Shukubamachi Street


After becoming a hub for travelers during the Edo Period, Kita-Senju has never lost its status as a good place to stop for a drink and a bite to eat. Wander down the area's narrow shopping streets, full of old establishments and newer additions, and you'll find plenty of places selling all kinds of goods and food. The streets might be relaxed during the day, but locals stream out of offices when work ends, looking for some good drinks and grub. Things get busier the closer you get to the train station, and the signs of izakayas (Japanese taverns) of all kinds brighten the streets. If you want a solid variety of seafood, we recommend you dig in at Mekiki no Ginji.

The lights shining out of all the local bars and eateries make it a cheerful part of town.

Not far from Kita-Senju Station is Mekiki no Ginji, where you'll get a wide variety of seafood.

Finish Off the Night Around the Station

If you're not quite ready to go home yet after dinner, the area around Kita-Senju Station has plenty to see. Two big department stores surround the station, Marui and Lumine, offering all kinds of shopping. They present a fun change from all the romantically moody old-fashioned shopping streets, with all the department store shops gleaming in the bright lights.

Before you head home, don't miss the chance to run to the Kita-Senju Station roof, and take one last atmospheric snapshot in front of the busy streets.

Don't miss a beat, find your way through Tokyo in a flash with the Tsukuba Express. Or head outside of the city, and use the line to start your trip up Mt. Tsukuba or make your way to the charming Tokyo suburbs. Wherever you're heading, you'll be there before you know it!

Be sure to look out for more exciting articles every day at JAPANKURU!
Or add us on Instagram and Facebook to share your pictures of Japan. 🗾

⇩ See more of our trip through Tokyo's Shitamachi. ⇩