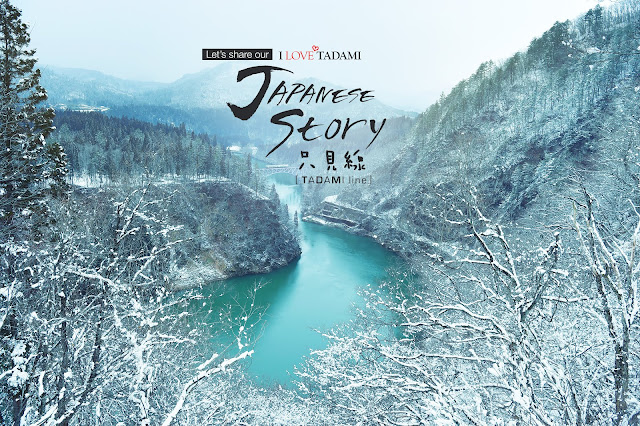 
March 11, 2016
Today marks the five-year anniversary of 2011
Tohoku earthquake and tsunami in northern Japan.
Defying the forces of nature the Tohoku region shook
strongly not just the ground but also people's minds.
The effort still continues to this day to fix all the damages
that have been done, however some damages cannot
easily be rectified. Some places however, are still
clinging on to their original beauty...


Tohoku region, is littered with beautiful tourist resorts
used throughout the year. So the Tohoku region is actually
one of the top tourist spots in Japan, with beautiful and
vivid nature in each season.
Following the path of the Tadami River we can see a
beautiful dam dotting the picturesque landscape.
An amazing draw of the Tadami Line is the ability to roll
down the window to catch a closer glance from your own
eyes at the magnificence laid out before you, making this
train the perfect choice for taking in the distinct views of
autumn or spring foliage. And the wintertime,
as pictured above and throughout the article is truly
something special.

This story is going to focus on the train journey,
but there are many places to see along the way so
we'll give you some recommendations as well! ^^
It's not very often that you get an opportunity such as
this for winter travel so we hope you enjoy it as much
as we did! 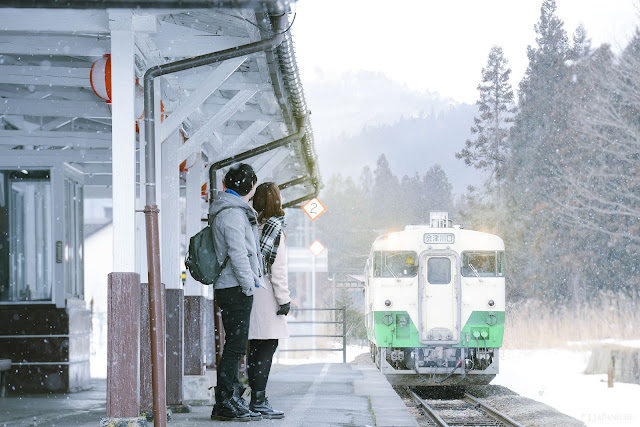 If you're not familiar with a distinguished sub-culture in
Japan called "railway mania", don't be discouraged, most
people aren't. For your information, the concept refers to an
individual that is obsessed to a certain degree with trains.
These individuals travel far and wide to take pictures of exotic
trains, some even spanning just a few stops in a secluded area.
Anyways, if there were ever a train to get hyped about, it'd have to
be this Tadami Line. It's a fairly old-fashioned train akin to a countryside grandfather when faced with the high tech trains of a larger city like
Tokyo. This encounter is sure to be something special and we're sure
you'll enjoy it. 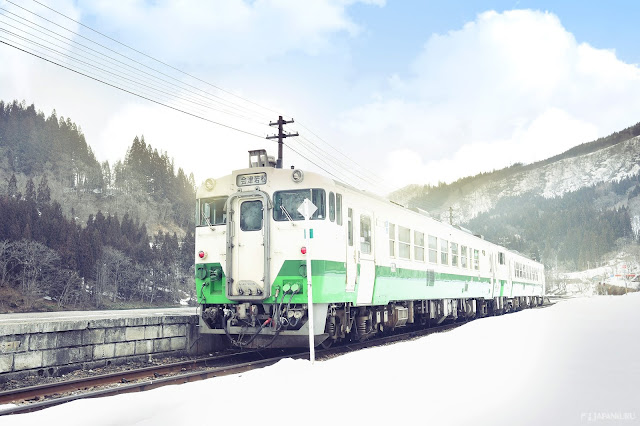 Operated by  the JR East Japan Railway Company, The
Tadami Line connects Aizu-Wakamatsu Station in
Aizuwakamatsu, Fukushima to Koide Station in Uonuma,
Niigata. Spanning 37 stations, the route has been run
since 1942 with a total length of about 135km. 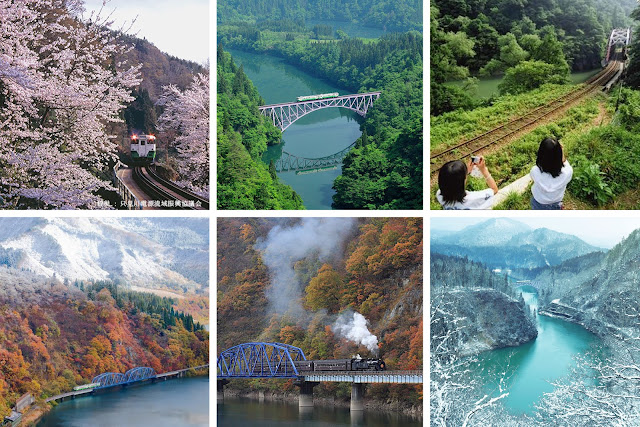 A photo can only convey so much and these photos
barely do justice, showing the unexplainable beauty that
exists in these locales. Although this time we are catching
a glimpse of the winter wonderland, don't forget that
colors of spring and lush greens of the summer
are right around the corner. 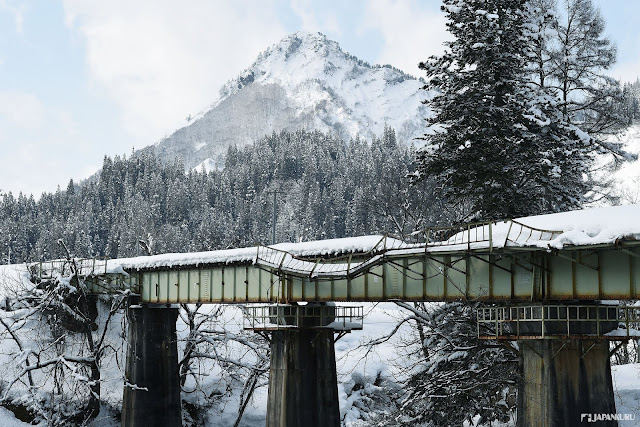 Due to the floods in 2011, seven out of the thirty-seven
stations saw quite a bit of damage as well as damages to the
tracks and bridges along the route. Though transportation
was not halted due to the fact that people used buses instead
to get around.  The best way to think about Tadami, is a location
that dramatically changes each season offering something
new and beautiful.

Why exactly this place needs to be advertised will be clear
if you simply take a look at the landscape. An outstanding
place of this magnitude wasn't made to be only enjoyed by
the locals. After seeing for yourself, trust us, you'll want
to share your experiences with all your friends as well... 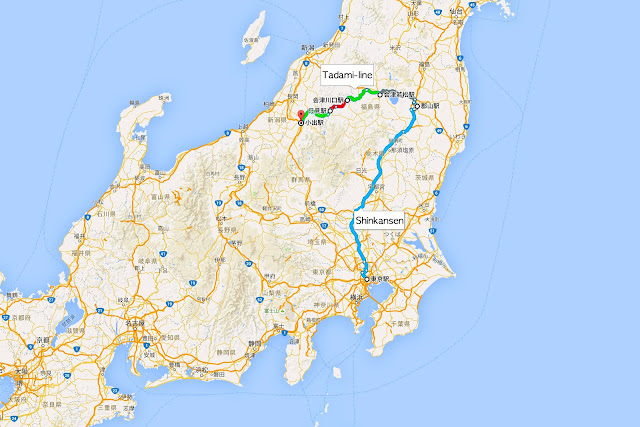 Way from Tokyo to tatami

The red section of the map is the part that is still
under construction and may not be accessible.

● -For the damaged section: use the alternative bus

Do you know about the JR East Pass?
To get to the Tohoku region you can use the JR EAST PASS.
A special pass for discounted rates while traveling in Japan
only available to tourists.
The best part is you can use it on all of the railway lines
of JR East for just 22,000 yen!
Too high?
Because it can be used for up to 5 days there's a very high
possibility you'll get your moneys worth within the first
couple of days.
It can be purchased from the website or after you arrive in Japan.
https://www.jreast.co.jp/e/eastpass_t/ 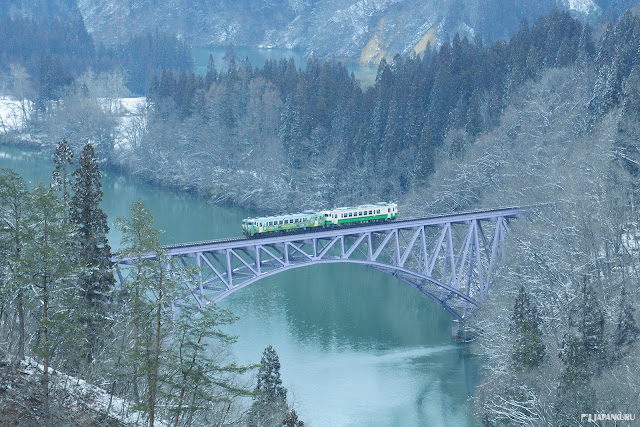 Taste the enjoyment of endless travel

The Tadami Line offers the beauty of a true course through
Along with taking pictures you'll find yourself running
through your phones batteries trying to capture all you see
before you. According to comments on such social media
it's known as "the most romantic railway in the world"
But hey, these pictures are really worth a thousand words!

The Landscape just outside the window

In Tadami the charm of local trains never ceases to
amaze, allowing riders to get a closer view by opening
their window. Now you can never miss out on capturing
a photo of your favorite scene. 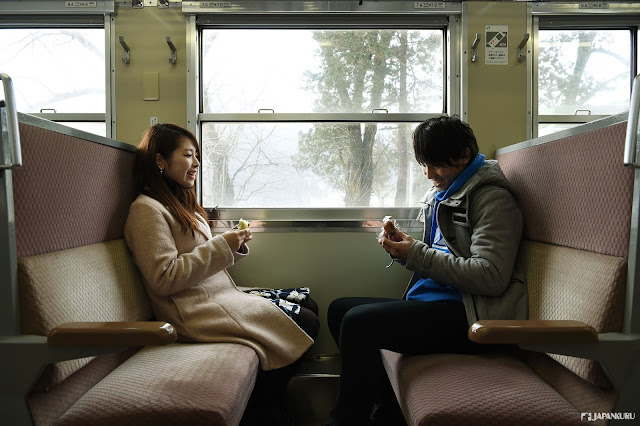 Tadami line is a modern wonder!

The first surprise ~ Every time you glance out
the window you're greeted by a new and different
landscape. Lock away the memories of this beauty
into the reaches of your mind for safe keeping.
Eating sweets on the train is bonus you can enjoy
during the trip. (^^)
This JR East Pass trip sure is nice ... Enjoy some fresh homemade cooking!
In the small countryside village, you can find a place that
provides an easy and affordable buffet lunch. Don't let the
appearance fool you though, the meal is extremely delicious
and made up of 5 star dishes. 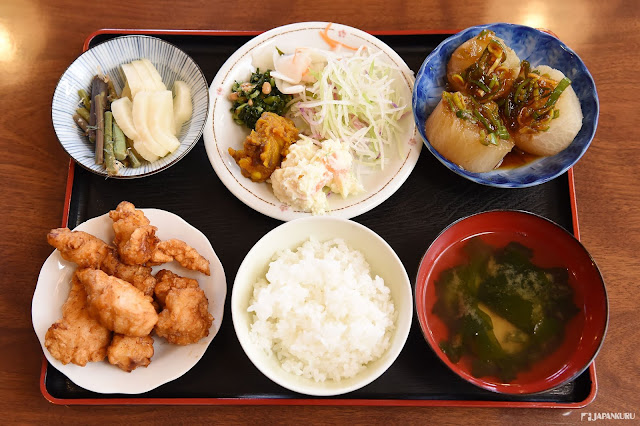 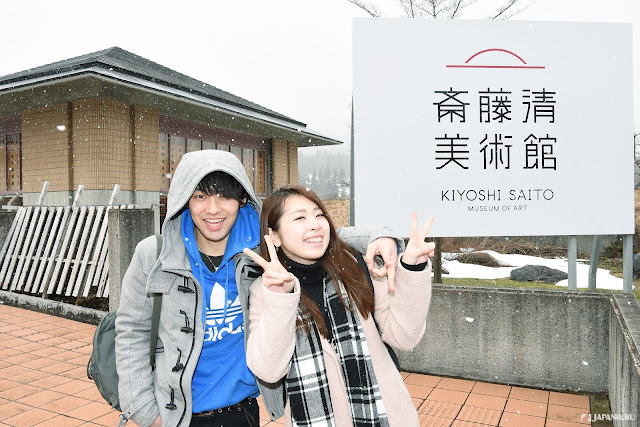 What's a trip without adding a bit of cultural
refinement to your experience?
In this museum you'll find works created by the world famous
artist Kiyoshi Saito whom creates his art using a technique
called woodblock print. He is most well-known for his Aizu no
Fuyu (Winter Aizu) collection which holds a prominent
significance in the museum. 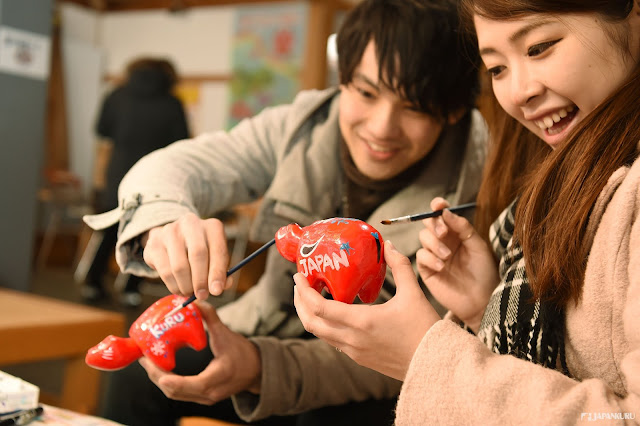 Located next to the museum it's possible to take
part in an Akabeko making experience. You'll be provided
with a red based model of the famous souvenir and you
can try your best to design your own unique version of the
famous bobbing cow.

Yanaizu village is the birthplace
of the Akabeko

The origin of the Akabeko have at last been discovered.
In the old days, times were tough for the people of Yanaizu
village especially with the harvest. A strong cow used heavily
in the creation of the nearby Enzō-ji temple was said to be
the creature represented by the Akabeko toys because of
it's unyielding strength and determination during the
construction.
There are many conflicting accounts of the story but
in one version of the tale, the cow refused to leave
after the construction was completed and became a
permanent fixture. Afterwards the toys were created
and were quite popular. Later, as a smallpox outbreak
occurred, the people of the village noticed that the kids
who owned an Akabeko toy, didn't seem to catch
the illness. Thus a legend was born... Apparently here in Aizu-Oshio Kanayama-cho you'll find
natural existing carbonated water which is often
referred to as sparkling water! This has got to be very
rare in the world! It had already began being commercialized
from the early Meiji era and exported around the world.
Nowadays, fine dining restaurants and Japanese domestic
luxury hotels across the world, offer it in smalls amounts
to patrons, but little do they know it's naturally occurring
and free...
This is why we must preserve special places across the
globe such as this, because once it's gone there won't
be another chance to get it back.

Soon as you dive in you can already feel the
carbonated benefits. The small natural carbonic acid
bubbles work well to heal the whole tired body and also
removes waste. The efficacy is a good point but the
price of entry at a mere 300 yen steals the show. ^^

Aizu Oshio carbonate and carbonate hot spring
(アイズ押尾炭酸と炭酸温泉)
Near the station:
About 25 minutes by bus from Aizu-Kawaguchi Station.
From Aizu Oshio bus stop: Walk about 10 minutes 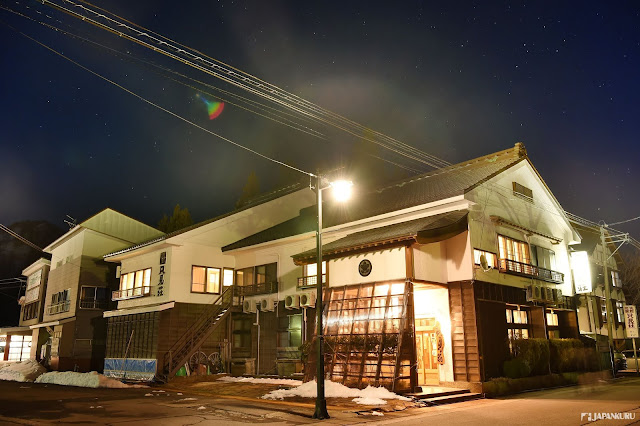 Tadami Tourism Point Five: A warm night at the inn
★★★★★
Hands down five star experience staying at an inn near
the station where you can enjoy a simple kind of life
similar to the old days in Japan.
Directly in front of the Tadami Station, the Minshuku Tadamiso
cannot be missed when passing by it. 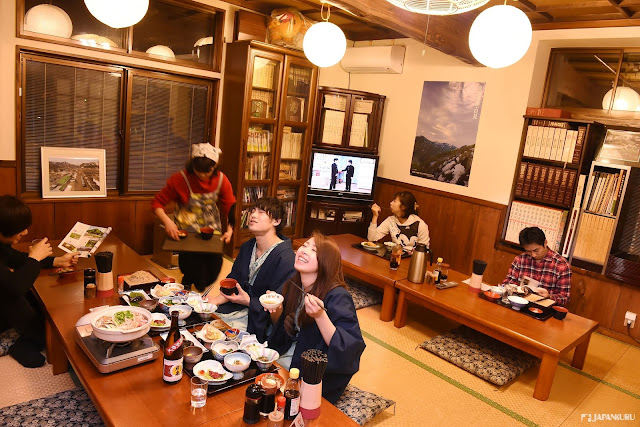 Enjoy a meal in a relaxed atmosphere amongst good food
and great friends. The shopkeeper aka cook will be there
to take care of you during your stay although you can easily
make a day trip out of the Tadami Line be sure to be well
rested so you can enjoy more time in this beautiful place.

Lovely Tadami ski resort about a 5-minute drive from
the inn (Tadami-ski). Ski, snowboard, go snowshoeing or
try out the banana boat, you can enjoy a variety of snow
activities. And if you're wondering about the Torii in the back
of the picture ... according to the legend, any couple that
makes their way through the gates wearing snowshoes
will come out with a newfound love for one another. 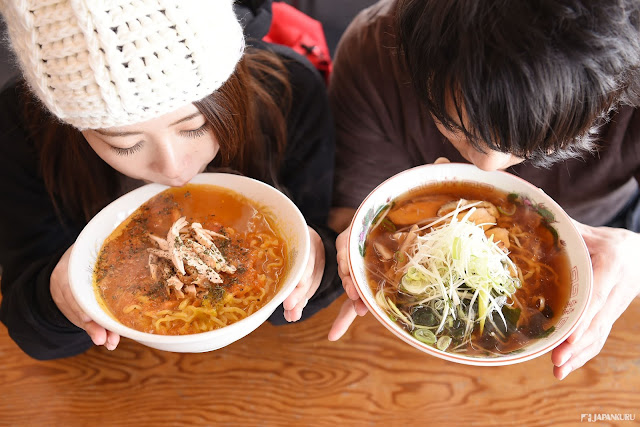 Japanese ramen is an indispensable food

After happily hitting the slopes it's time to refresh ourselves.
Surprisingly we found a ramen shop on the second floor of
the lounge serving tasty soy-sauce based ramen with tomato
soup and beans. Who would have guessed they'd offer ramen
in a place like this? ^^ 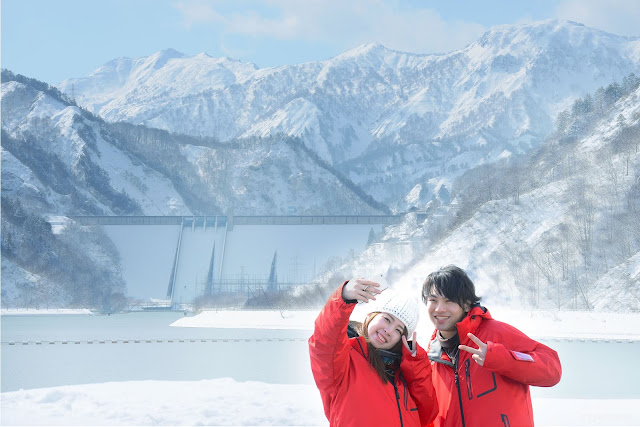 A lovely dam pitted between towering mountains and
a pristine lake. God made no mistake when painting this
beautiful landscape.
The Tagokura Dam, selected to the "Top100 views in Japan"
list for most beautiful dam and lake combination isn't the
worst possible site for a selfie. ^^ When we saw this superb
view, before we new it, our cell phone was out and we were
snapping away. 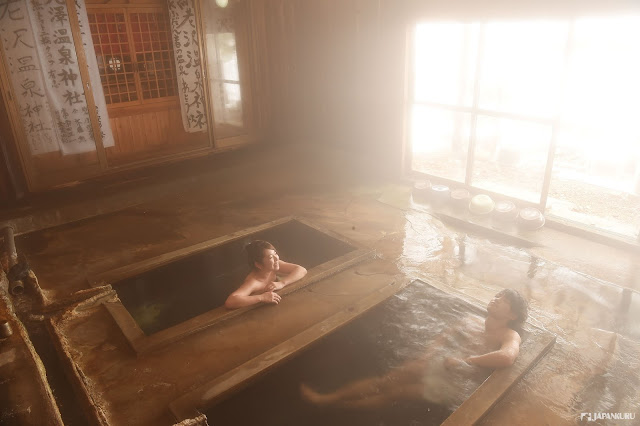 In the Yanagawa Izu neighborhood of Tadami a very
special Nishiyama Onsen is offering up mixed bathing
in a hot spring. In the culture of Japan, mixed bathing isn't
a practice that is considered the norm, but instead one of
those rarities you'll find after spending time here. A place
such as this, responsible for providing such healing for you
and your partner or friend is so great it should be
considered a shrine. ^^

Hot spring experience in the unexplored region of Tadami

Here in Nishiyama you'll find a whole area of hot springs
that are a bit aged but a still attractive. This spa houses 6
different hot springs each containing different
mixtures in the water to achieve varying effects on
your body. 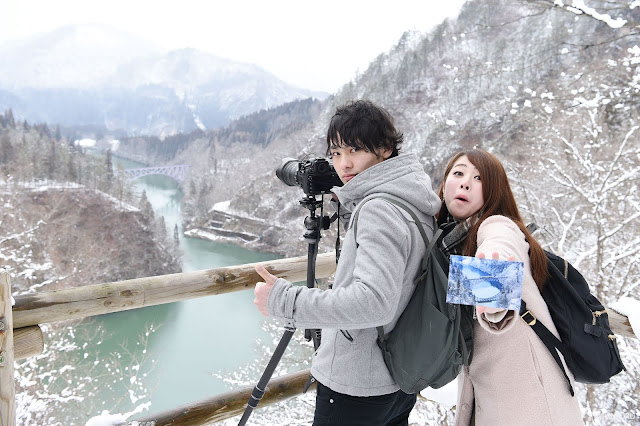 To simply view the scenery from the window of the fast moving
train wouldn't quit do it justice. Get out and walk around a bit
and explore this heart-stopping view for yourself. While standing
on the ledge up above the river so high catch glimpses of trains
passing in the distance. Be sure to bring a strong tripod so
you can keep your hands warm while you wait for trains.
Regardless of if you're a professional or not, this is simply
a great spot to capture the beauty of Tadami in one clear shot. 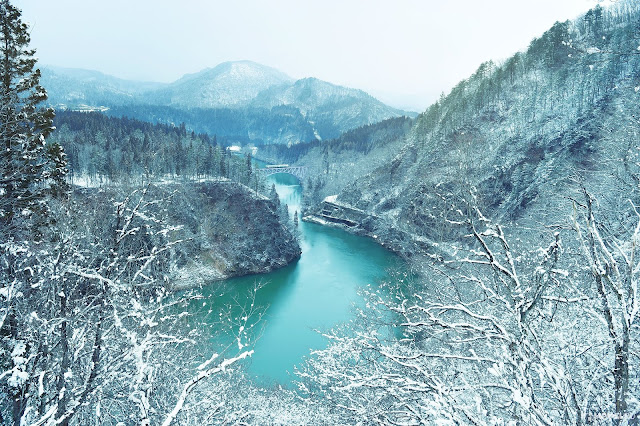 A beautiful view such as this most people don't have
the privilege to lay eyes upon. But it makes it all
the more special that this small train makes its way
through this small town. After coming here you'll probably
want to make a wish.
"I want to see more of the lovely landscape throughout this
mystical place" or something like that... ^^

Well the answer to your wishes may be on the way soon. The
story continues right here on Japankuru's blogger so be
sure to check back often.. 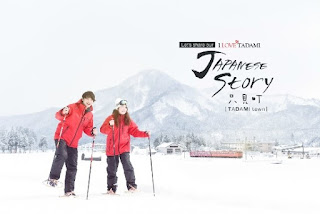 # 2 Second to none, Tadami travel.