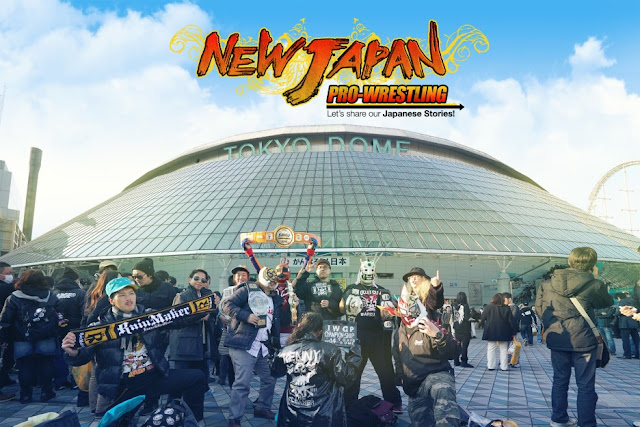 Story of Japan's "Wrestling”
2017.1.4 @  Tokyo Dome
JAPANKURU went to see Japanese wrestling for the first time.
"I do not care about winning or losing,
I will just give out everything in this game."
Why Japanese is so crazy about wrestling,
Why is professional wrestling popular in Japan?
We record all of it in this article.

“Japan” Paradise of Entertainment
Japan has abundant experiences everywhere.
Gourmet such as ramen and sushi are also good, but you’d better have some different experience.
Depends on how to spend your budget,
experience such as yukata rental, sightseeing bus around Tokyo, and show at Shinjuku Robot Restaurant.
Those performance are quite popular.
Not only that. watching baseball games and sumo wrestling etc.
Needless to say, Japan is a ”paradise" of entertainment.

This time, we would definitely like to show you the real entertainment experience.
Yes!!! Entertainment to be enjoyed in Japan
That is Japanese Wresting.

Female fans are increasing! The reason is?

Japan is now in a boom of professional wrestling.
Speaking of the existing professional wrestling, it was the image of men, sweat, fresh blood, extreme, scary ... and so on, but now wrestling is cool, healthily muscular, brilliant, respect to partner, effort, tears, and players' stories, young pro-wrestlers' efforts have been reborn and everyone is eager to enjoy the New Pro-wrestling!

If you are going to watch a professional wrestling game in your trip to Japan, don’t miss these six points. Totally different enjoyment!

1. Powerful act! Brilliant technique!
Each brilliant technique has its own name.
In particular, the star-class players have a “finishing technique” to win the games.
There are many difficult names, but all are gorgeous, and really it's amazing to see in real!

2. Good-looking players like Johnny’s boy bands’ idols(?)
Now, one of the reasons Japanese women are enthusiastic about wrestling ... Why?, Johnny’s level? (Popular idol band groups in Japan that are under the production company called Johnny’s)
More than Johnny’s level.

Wrestlers of New Japan Pro Wrestlers sometimes appear in drama and variety, etc. No doubt they are more popular than the Johnny’s idols.


A fateful rival crashes in the match fighting for “title.”
While being surrounded by many audiences, he would show off his wonderful performances with all his strength.
Defeat the opponent with a tremendous deathblow, keep both shoulders on the ring and at the same time the referee starts counting.
"One, two, threeeeeee ..."
At that moment, while the opponent was thought already defeated, he lifted up one shoulder ~!
Capture this impossible moment, stop the counting.
That is the instantaneous power of the referee so-called "count of  2.99 seconds" in the world of pro-wrestling.

***
4. Costumes of each players
One of the highlights is the costumes of each players. Especially, preparing all the goods of your favorite players, such as T-shirts, masks, accessories, towels etc. , fan are getting  ready at the cheering seat.
Their enthusiasm is surely a great force and power for the players. 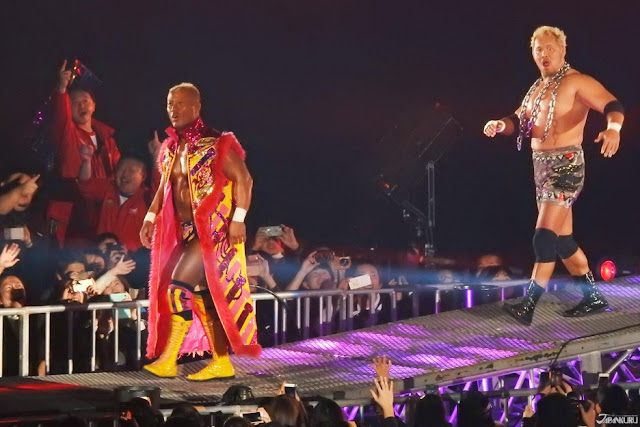 ***
5. Wrestling goods
Wrestlers who are as popular as the Japanese idols! Look at their amazing sales of related goods!
T-shirts, caps, and towels are popular items.
Get one as a souvenir of your trip to Japan!
Nice design! Easy to use everyday! 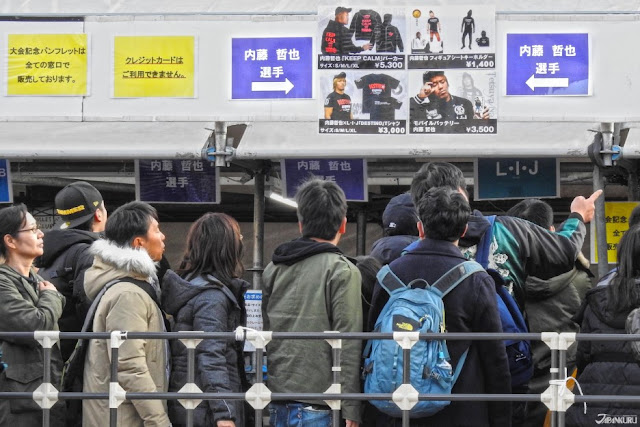 6. Enjoy eating, drinking and shouting!
Watching Pro wrestling, there are no difficult rules.
Enjoy your heart and body with MAX tension as much as you like! Yes!!  like enjoying a LIVE SHOW !!!
They also sell snacks and drinks!
Just eat, drink and shout and enjoy!!!
Get rid of all your stress!

"One person's devotion in 100 years" Tanahashi is the leading role who has driven the New Japan Pro Wrestling.
Wearing a handsome mask and having a great body, he says that he keeps standing in the ring every day to protect the sluggish professional wrestling.
Faithful to the fundamentals of wrestling, and his elegant and beautiful techniques are said like the real textbooks.
"My life is made by me"
At the game in the Tokyo Dome on January 4, 2017, in the introduction video of the players playing in the dark before entering the stage, Tanahashi said that phase! Then, many female fans cheer while he enters the ring.

His nickname is ”Rain-maker."
It means ”Audiences gather to see me, audiences gather buy my goods. That is why I bring a shower of money to New Japan Pro Wrestling.”
Actually, he is a popular Wrestler of New Japan Pro-Wrestling.
He also decorated the finale of the Tokyo Dome Match on January 4, 2017.

What is New Japan Pro-Wrestling?
Why keep saying  New Japan~ New Japan~ blah blah blah….
Why so amazing?
Let’s check them out for everyone now!
1. Power to hold large events
Tokyo Dome.
“Dream Ballpark,” which every famous entertainer wants to stand on that stage once.
A pro wrestling game will be held only once a year at this "Tokyo Dome," which is used as a baseball field on a regular basis and also loved as a concert hall for domestic and foreign artists.
We went to the game on the 4th of January.
Only few of the professional wrestling groups in Japan, it seems that only "New Japan Pro-Wrestling" can play in the Tokyo Dome.

***
Introduction of the game in Tokyo on January 4, 2017
If you are a pro wrestling fan in Japan, there is no one who does not know the game of Tokyo Dome on January 4, which is called "Ittenyon" (Literally means 1.4, that is January 4).
Regular wrestling game can be watched at “Korakuen Hall” next to Tokyo Dome and ”Ryogoku Sumo Hall.” But if you are really interested in, the biggest event “WRESTLE KINGDOM”for wrestling only once a year. It is a big event that can not be missed. The best game! Yes! We watched this Itteyon live during this time.

The first experience in our life, a professional wrestling.
Easily, it is more fun if you grasp the type of technique , so let us  introduce some of them.

Basic technique
Reverse horizontal chop
I think that everyone has seen it once, it is a basic technique that is associated with professional wrestling first.
New Japan Pro-Wrestling teaches such "basic" thoroughly, so it is said to be orthodox.

Body Slam
This is one of the basic techniques of wrestling.
It is also a watching point to see exquisite passive moments of players who are trained.

lariat
In American wrestling, this technique called "clothesline," is a technique of striking the chest around the opponent's neck with the muscles of the inner arm.

Rain Maker (Making shower of money)
This technique is Kazuchika Okada’s Special Move. It can be said that it is a development type of Lariat.

Brilliant skills
The technique of wrestling is extreme of excitement!
Especially junior heavyweight is relatively light in weight, so many techniques such as gorgeous aerial rotation will appear.

Painful skills
Even if you think normally, there are also many techniques that seem to be thinking "Will it be okay?”

However, that is the charm of pro-wrestling to catch such a painful technique without avoiding it!


Tanahashi player who jumped off from the ring corner knocked down to "Kenzan" where Naito knees stood straight.
"Grab your opponent's skills brilliantly ..." If you look closely, you can understand.

Highlights of brilliant skill!
It is outside outside. It is enough to worry a little while watching players “flying” sometimes. Those are their technique though.
Whenever a player who stays in front of the player without escaping such opponent's technique, there is something unexplainable in words!

Your own safety is second!!
Believe in opponent players and showcase brilliant techniques, literally ”"wrestling" of the "pro" !!!

Wrestling of  " pro ", so-called Pro-wrestling
How beautiful and cheerful to take/catch the technique without avoiding from the opponent ...
"Aesthetics" of such wrestling can never be tasted in other sports.
For wrestlers competing with each other on a ring, they are professional enough to respond to the crowd of the audience!
Isn’t it real and live?
Are you interested in watch "Wrestling" while traveling in Japan?