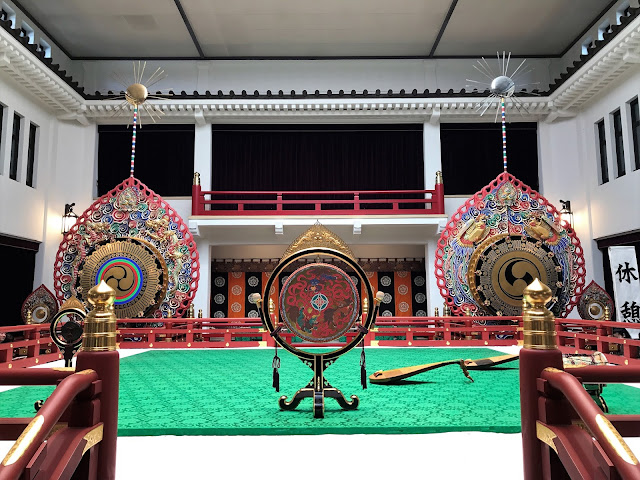 We went to the Japanese Imperial Palace
to watch a special performance to Japanese history and culture!

When you talk about Japanese performance art,
what are some of the things that comes to mind?
Kabuki, Noh, and Bunraku right?
What about Gagaku?
Have you ever heard of or seen it?
Well we got the chance to watch a performance
at the Japanese Imperial Palace, and since Gagaku
isn't that well known in other parts of the world,
we thought we'd share with you!

First, we'll explain what Gagaku is.

Gagaku, literally meaning "elegant music", denoting classical music. The term was originally used in contrast with Zokugaku (popular music). Gagaku in this sense existed also in China and Korea, but that music is totally different from Japanese Gagaku.

Japanese Gagaku is Japan's most ancient classical music. As the sum-total of Japanese music, comprising native Japanese songs and dances handed down from ancient times, instrumental music and dances introduced to Japan from the Asian continent and Japanized, as well as music newly created under the influence of such music, Gagaku evolved into its present form around the 10th century A.D. (mid-Heian period).
Gagaku has been performed mainly at the Imperial Court, in aristocratic society, and at important shrines and temples. Gagaku handed down by the Music Department of the Imperial Household Agency now sets the standard for Gagaku.

GAGAKU at the
🏯 Japanese Imperial Palace 🏯 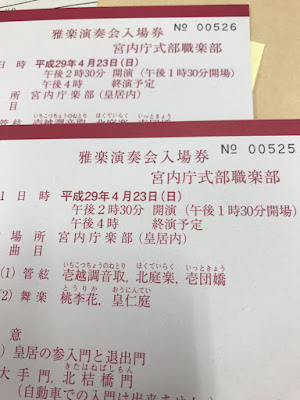 Gagaku is performed twice a year,
in the spring and fall/winter season.
However, regular access is only available in the fall.
During the spring, diplomats, Prime Ministers/Presidents are invited.
Thus, a pretty closed event.
Both times, their performances relates with the seasons.
We went during the spring, but we weren't too sure
how traditional Japanese music replicates spring.
We were excited to find out! 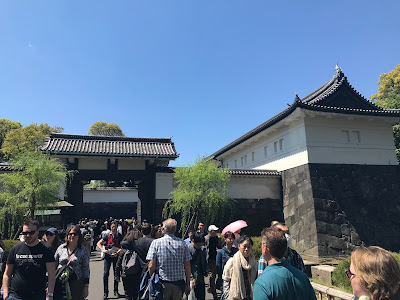 The Gagaku performance takes place at the Gakubu Chosha,
or Music Department Building.
We went in through the main gate,
following the road along until we got the the building. 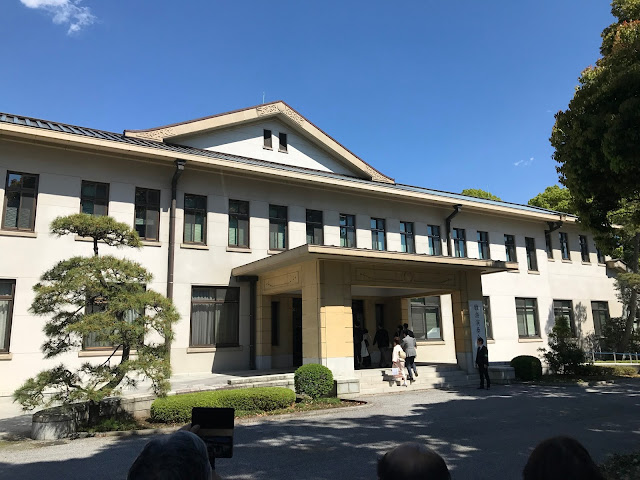 The outside of the building looked so classical,
we had no idea what the inside would look like.
Would it be westernized elegance like the other buildings
at the Imperial Palace, or more traditional to Japan?

In a way, a bit of both!
The walls and structure of the building was very classic and simple,
which forced your eyes to look at the stage with its intricate colors of
golds, reds, blues, greens, and even blacks.
Once you entered the building, the flooring was pebbles.
It was really the little details, that made this hall so ravishing.
We had no idea what to expect from the performers. 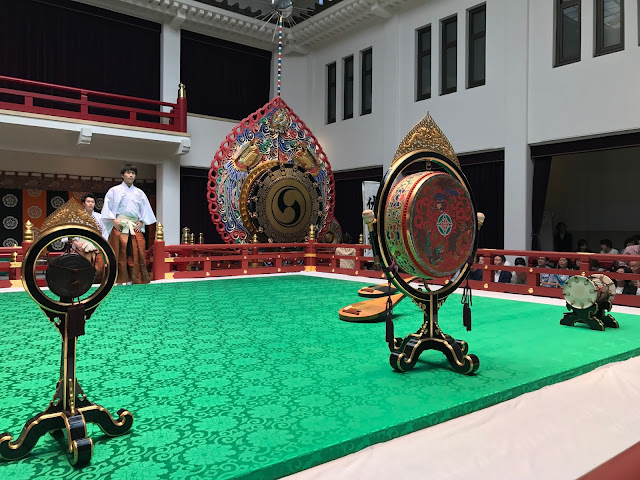 Soon, men of the Imperial Music Department
starting bringing in instruments one by one.
Once again, they were are so beautiful!
We were a bit surprised at the size differences of the instruments and how they are actually used.
Many people have heard old traditional Japanese music before,
but do they know much many instruments are involved? 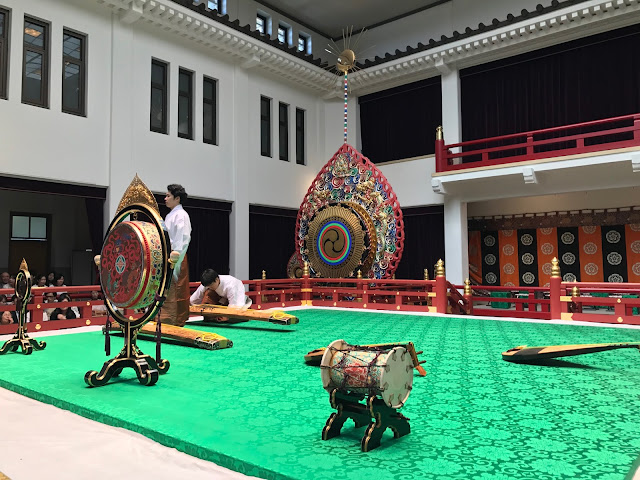 We'll discuss it a bit more later,
but there are a total of 5 wind instruments,
3 strings, and 5 percussion!
That's 13!
Waaaaay more than we expected! 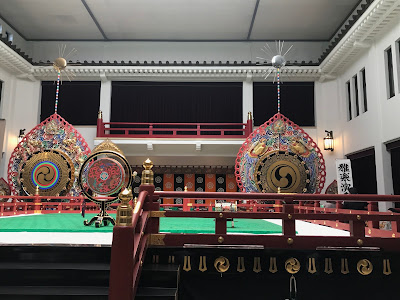 Once the show started, we weren't allowed to take pictures.
Normally we would try to sneak a couple pictures or two,
but this time we didn't want to take the gamble.

So since we weren't able to take pictures,
we'll just explain a bit more of Gagaku and what we saw.

There are three different kinds of Gagaku
according to its place of origin and routes of introduction:
Kuniburi-no-Utamai (native-style songs and dances), Gaku-bu (music and dance) of continental origin, and Utai-mono (vocal pieces).

(2) Gaku-bu
Gaku-bu of continental origin is instrumental music and dances, based on the music and dances of the Asian continent introduced to Japan from countries such as China and Korea over a period of about 400 years, from the 5th century to the beginning of the 9th century A.D., and perfected in its present from in the 10th century.

(3)Utai-Mono
(vocal pieces, Saibara and Roei)
Utai-Mono is vocal music composed under the influence of continental music in the Heian period (794-1191 A.D.) and sung to the accompaniment of Chinese musical instruments. It comprises Saibara, with words of Japanese folk songs, and Roei (recitation), with words of Chinese poems chanted in their Japanese reading.

There are three performance styles of Gagaku
corresponding to the three kinds of Gagaku above: 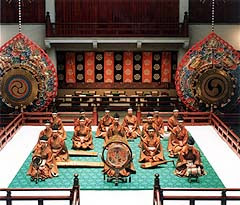 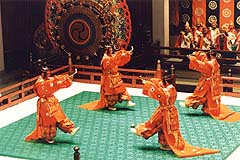 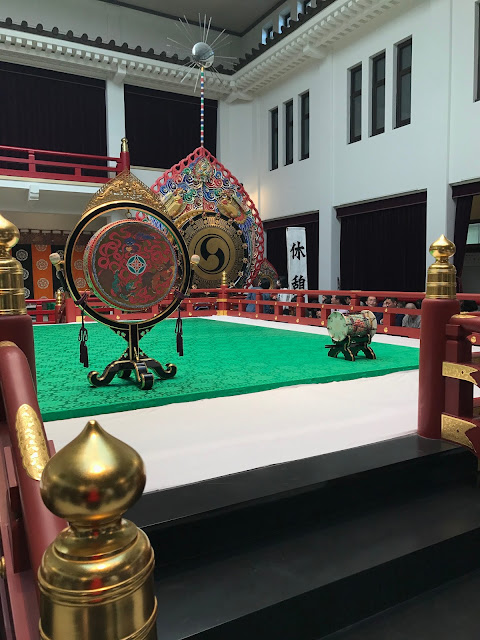 When we went, the Gagaku program was divided into two performance styles.
The first part was the Kangen (Instrumental Music)
and the second Bugaku (dances and music).

The instrumental music performance was so beautiful and relaxing.
They performed three pieces, starting with tuning.
It was amazing how the tuning alone was considered a piece.
The Netori (turning) was different from the western orchestra type of tuning.
It was so soothing and calming,
it was difficult to stay awake.

The MC said the dance via Korea was much faster than the Chinese,
but honestly, we could tell no difference haha
The costumes were very different though,
so were the movements and music style.
The costumes are what really made the atmosphere✧(♡◡♡)✧ 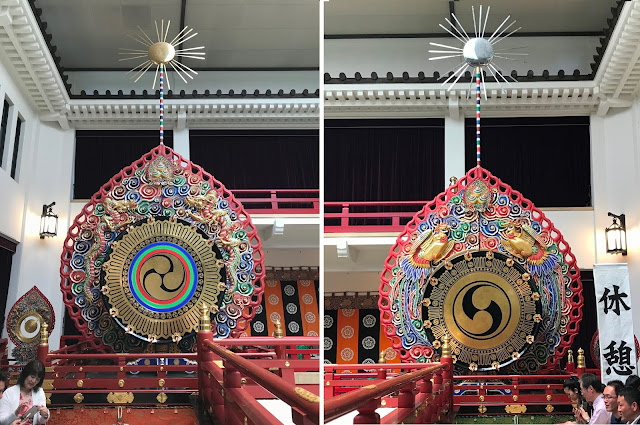 With its history of well over 1,000 years,
Gagaku is said to have the oldest living tradition
of orchestral music in the world🎶
Millions of people come to Tokyo
without even knowing about this type of culture,
or even that there are performances being held at the palace!
If you're able to come to Tokyo during the fall, we STRONGLY recommend
you coming to watch Gagaku.
Language isn't a factor here, it's more about enjoying
and understanding a places culture
while experiencing something not even Japanese people know about!
Even if you don't get the chance,
we hope we opened your eyes to a new hidden treasure of Japan. 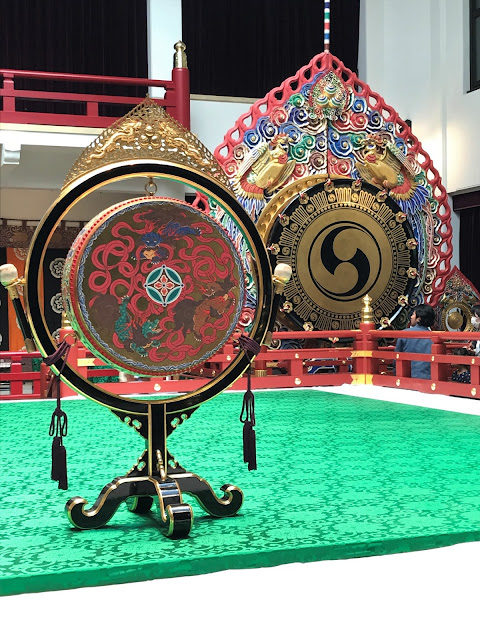 ★Gagaku (雅楽)
Japanese Imperial Palace (Tokyo)
📅 Every year at the end of October or the beginning of November, for 3 days
💻Imperial Palace Gagaku Info (ENG)
‣Reservation Page (Japanese Only)
To make reservations:
📨Buy a "paid-reply postcard" (can get from the post office)
and mail it by July 31st of that year.
Japan Post: Types of Postcards Info (ENGLISH)