For summer vacation we wanted to go to a place close to Tokyo,
that had interesting things to do and see, but still be able to relax.
So, we chose Gunma prefecture!
We had never been before, so we were very excited!

Where's Gunma?
Well, it's about an hour ride from Tokyo.


What about what's in Gunma/what's Gunma about?

Gunma prefecture has more than 200 onsen (hot spring)
and the most famous are four onsens,
Kusatsu, Ikaho, Minakami, and Shima.
Don't miss some of the nation’s best and biggest hot springs!
The most notable is Kusatsu Onsen.
It's day and night views are completly different and must-sees!!
Especially its Yubatake (hot water field) ceremony.

Gunma also has a lot of natural features
like mountains with altitudes of 2000 meters.
Gunma is the best place for people that want outdoor adventures.
Its mountains, ski slopes in the winter, become excellent hiking trails in the summer.

Since Kusatsu Onsen is so famous,
we wanted to go there and stay the night.
The ryokan, or Japanese Inn, that we stayed at
was so great!

They really protected and utilized
the Japanese "omotenashi" (hospitalitty cultre).
Which is why today I want to introduce and recommend
the BEST ryokan in Gunma~~ 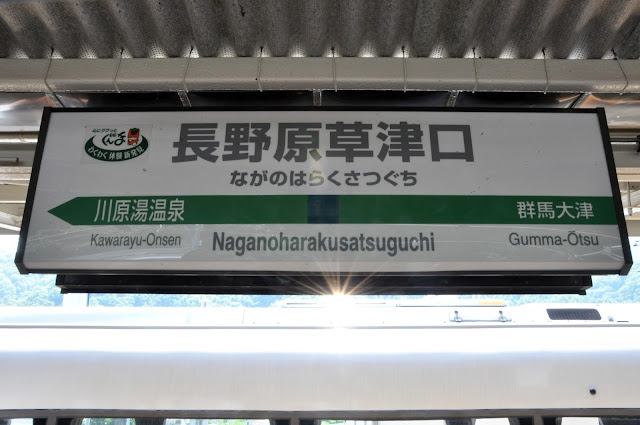 From JR Naganohara Kusatsuguchi station, take the bus bound for Kusatsu Onsen
and get off at Kusatsuonsen Bus Terminal. 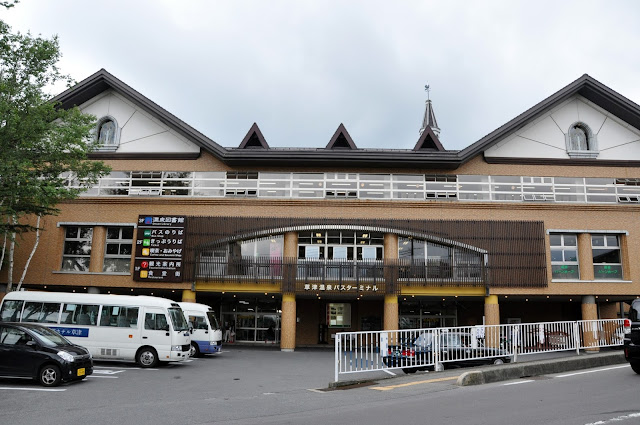 It's about a 20 minute bus ride.Free pick-up service from the Kusatsu Onsen bus terminal
is offered upon request. 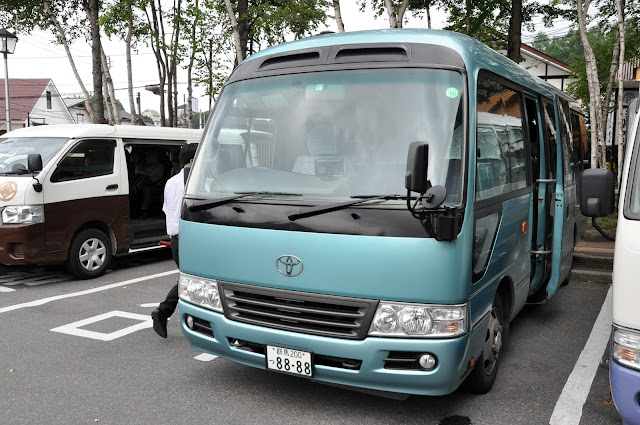 The hotel is super close to the bus terminal though,
like a 5 minute walk.
We weren't aware it was THAT close though!
When we arrived we took the pick-up service,
then after that we just walked.

Hotel Sakurai is just a 10-minute walk
from the Yubatake hot water field!
The location is so great! 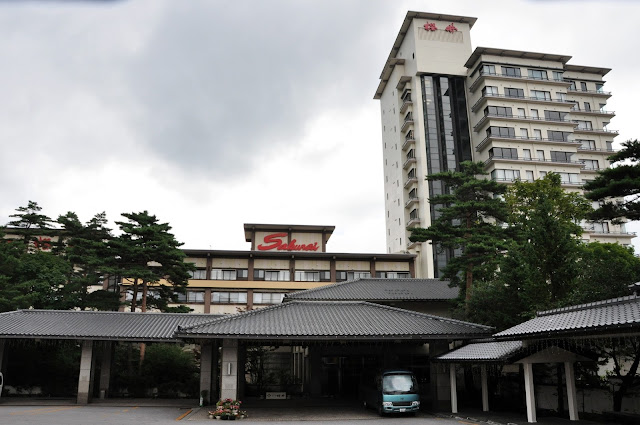 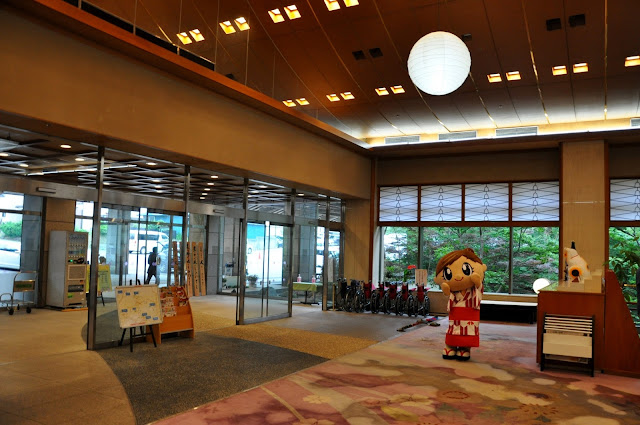 We were greeted with Hotel Sakurai's mascot!! 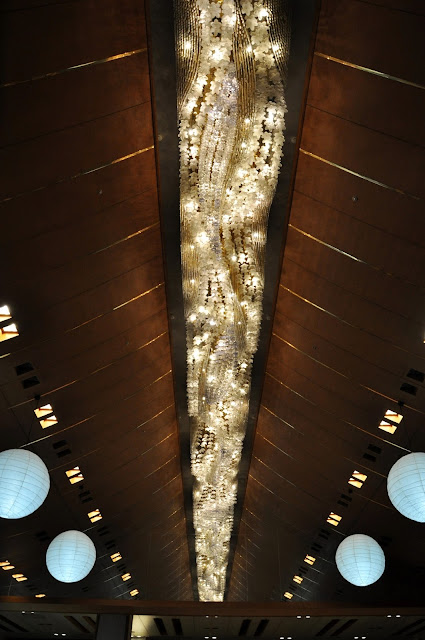 The first thing we noticed were the beautiful lighting!!

Then when we went to the counter to check-in,
a few plaques hanging above the counter caught out eye. 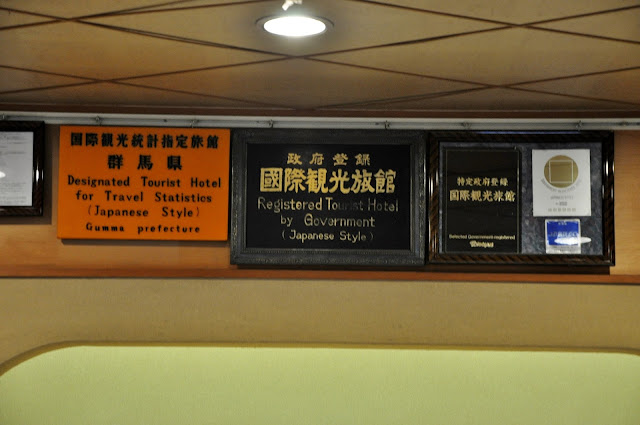 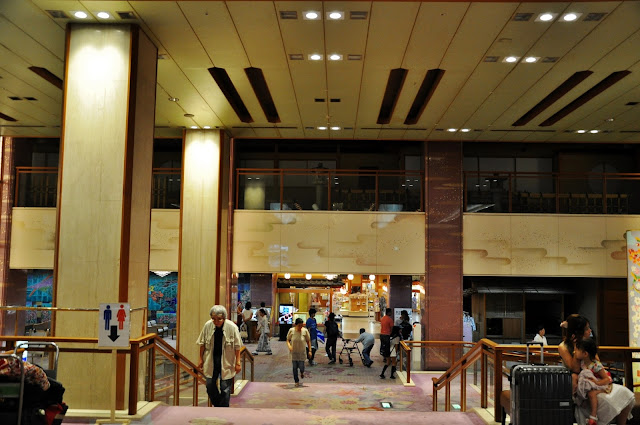 Everything was massive and so spacious!
It didn't feel like we were in Japan at all. 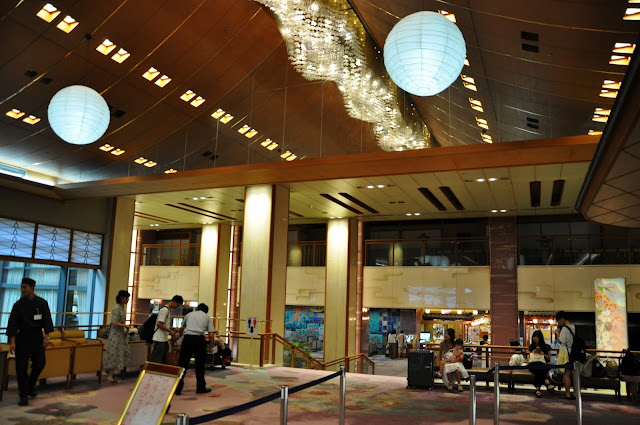 After we checked in,
a hotel staff took us to our room.
On the way,
he showed us around a bit
then took us to a map explaining the hotel and what was available.

Once we got to our room,
I figured he would just do the regular,
"Ok, have a nice stay!" sort of thing
but he didn't.
He told us what time dinner and breakfast was
and from when we could enter the bath.
He also went and got us tea for our room!
All of this was the highest level of
Japanese "omotenashi",
or hospitality,
that we've ever seen. 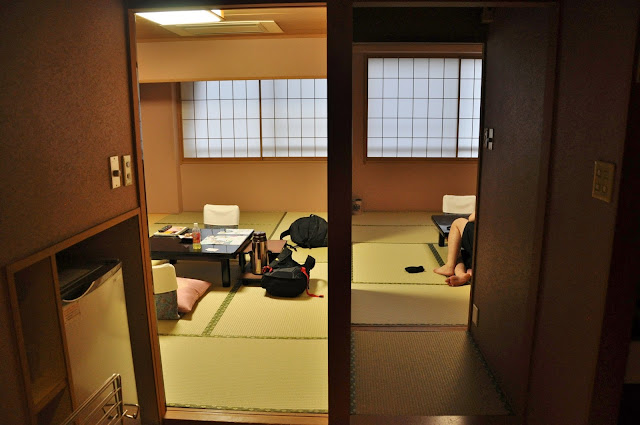 There are different types of room,
this was ours.
It was crazy because there were like two living rooms,
and two bathrooms!
I was waiting for a nice little family to walk in
to say they were taking the other half of the room. 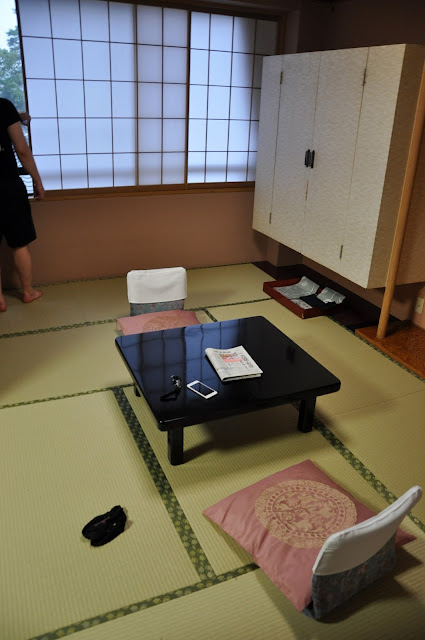 There is a table and chairs in each Japanese style room.
When we get in our room the hotel staff asks us which area we want to sleep
because they would move the table and set up our beds. 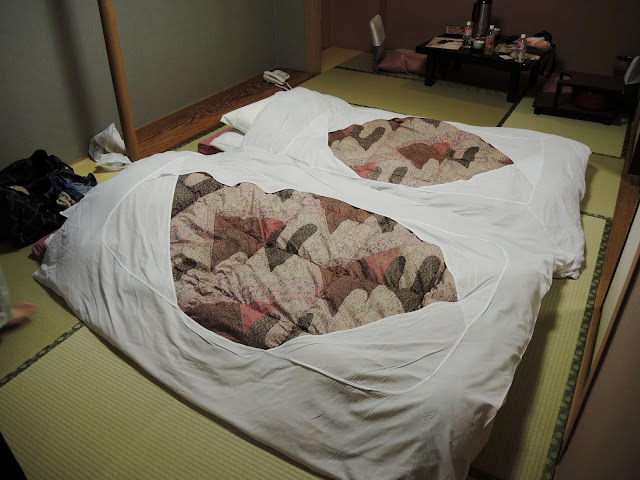 When we got back from dinner,
the hotel staff set up our futons for us!!!
✨～Japanese hospitality at its best～✨ 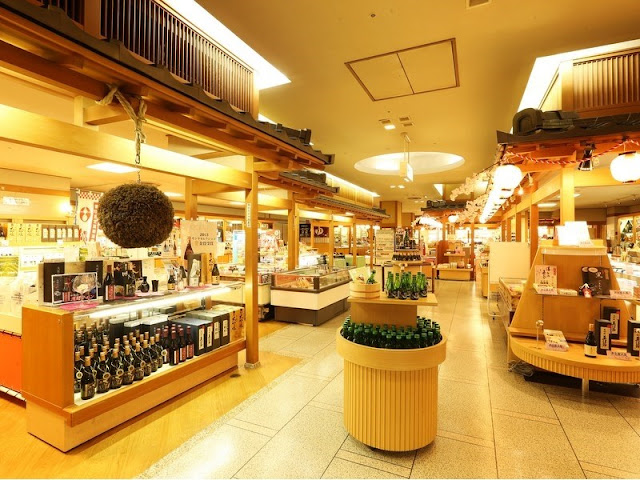 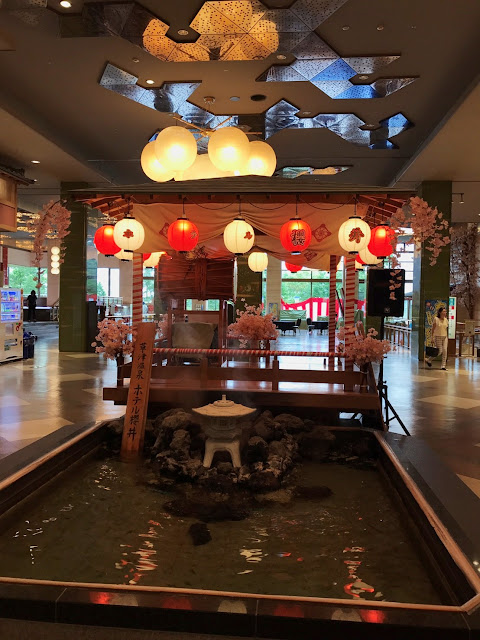 Other facilities at Hotel Sakurai is a shared lounge,
karaoke room, ramen corner, and a coffee lounge.

Hotel Sakurai has both an inside and open-air bath
on the 1st floor.

It does contain some sodium components,
so if you have an open cut or rash,
it'll sting a bit. 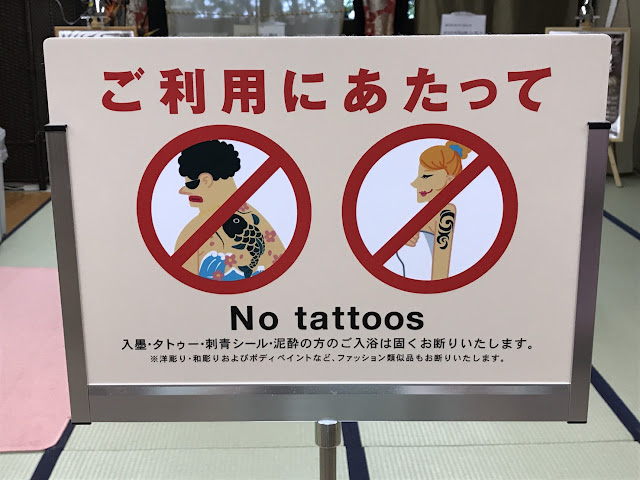 No tattoos....shocker.
It actually was though, because it's a hotel.
I love how they make the people with tattoos
look menacing.
I have very visible tattoos,
and I am a paying guest of the hotel,
so I thought it would be ok.
I went to the bath in the robe provided by the hotel
to cover up just in case.

When I went in the bath at night,
people looked, but no problems!
In the morning however,
the cleaning lady came out to talk to me
while I was washing my body to tell me that
people with tattoos weren't allowed.
I just looked at her and asked, "Why?"
She then gave up and went back into the locker room
and continued cleaning.
I think someone must have complained
because nothing happened after that.
So I just went in the bath and relaxed before breakfast.
I know the whole "yakuza" thing,
but I mean really...
I'm staying at the hotel,
I paid a lot of money.
You're going to tell a guest that
they can't fully enjoy all the facilities of the hotel?
I guess people with tattoos aren't safe anywhere :(

For breakfast and dinner there's a buffet that's included!
The restaurant is so beautiful! 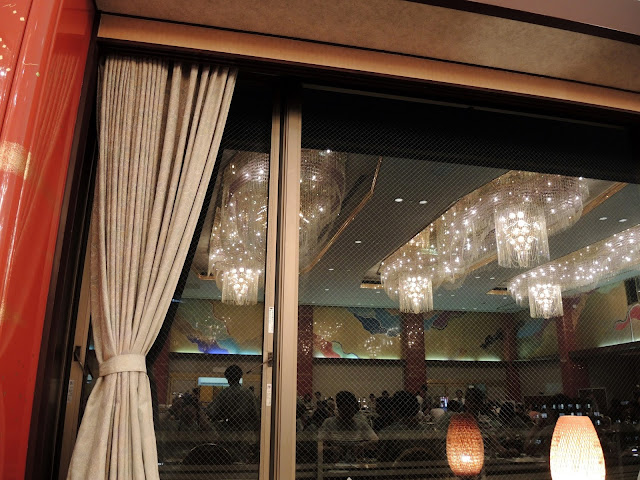 All the chandeliers in this hotel are just amazing!!! 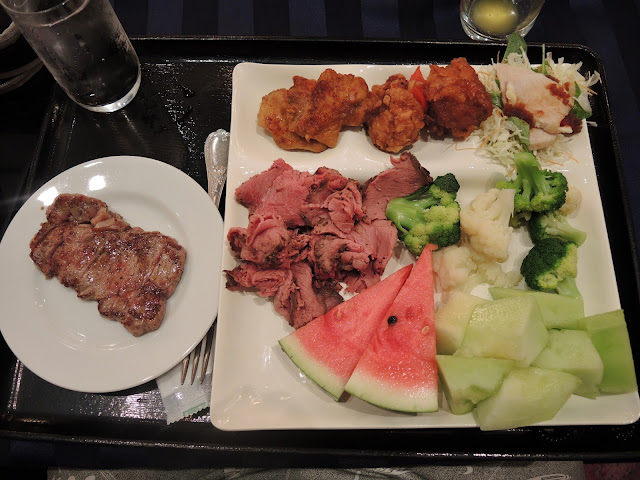 THE FOOD WAS AMAZING!!!!!!!
Probably the best food at a hotel I've ever had.
There was both Asian and Western food available,
with lots of yummy fruit, vegetables, and an ice cream machine!!!

Breakfast was great too!
They had over 70 different choices for breakfast,
and a french toast area that was made right in front of you! 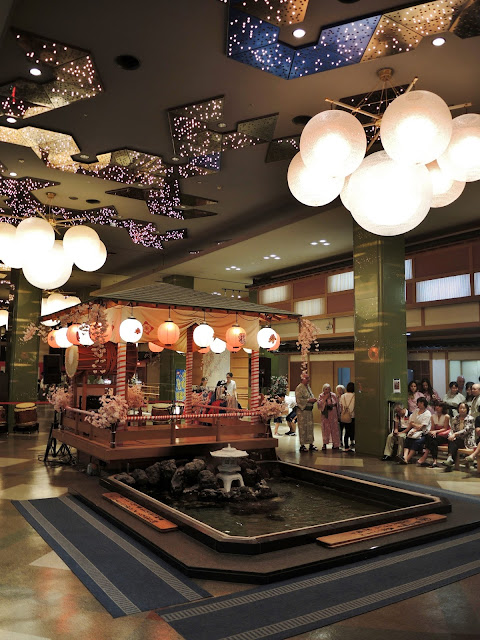 The hotel also has nightly performances of the traditional


"yumomi" method of lowering the water temperature.
So at 8:20pm we went to the Festival Area
that's right by the dining room.
There were already people there waiting. 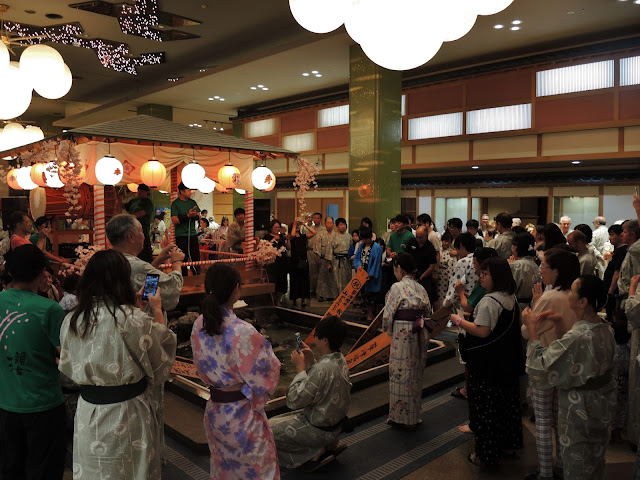 The men did a demonstration and
then said those who wanted a try could come up! 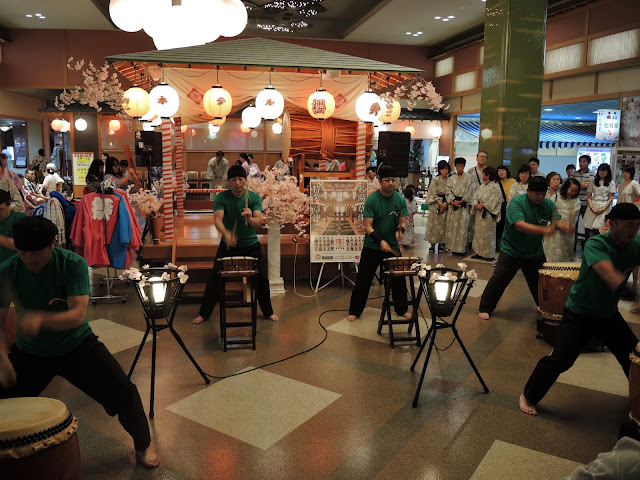 After those who wanted to try yumomi were finished,
there was a Japanese Drum performance!

Hotel Sakurai is a wonderful hotel!
It's even one of the top 5 most booked hotels in Kusatsu!!
After staying here, we can totally understand why!
It's so much more than just a hotel or ryokan.
It's like its own separate community.
The fact that Hotel Sakurai adjusted things
to where it would be a great place for foreign tourists too
makes it a very welcoming and special place.
Even some foreign hotels that are in Japan don't do that!
You are sure to leave Hotel Sakurai feeling relaxed
and fulfilled with your time spent in Kusatsu.
So if you or anyone you know
is planning on taking a trip to Kusatsu Onsen in Gunma
and is looking for a place to stay,
we recommend Hotel Sakurai!!! 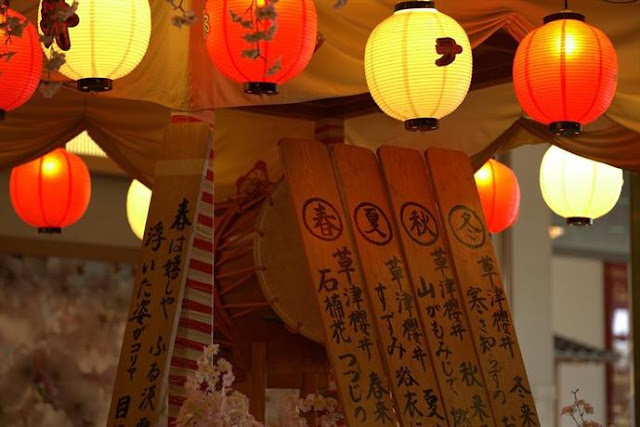