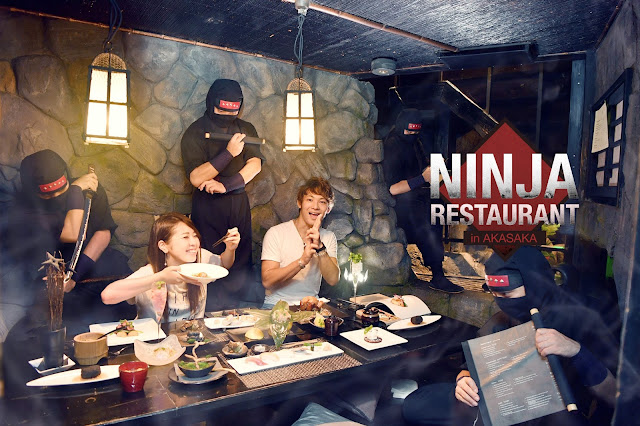 Fun, Bizarre, and Exciting!
Japan is known for having some fun and crazy themed restaurants.
There's maid themed, hospital themed, even robot themed!
How about one that gets a little more into the Japanese traditional culture?
We're talking about, a ninja themed restaurant!
Japan excels at creativity,
from the decor to meals,
you can't miss this fun ninja themed attraction! 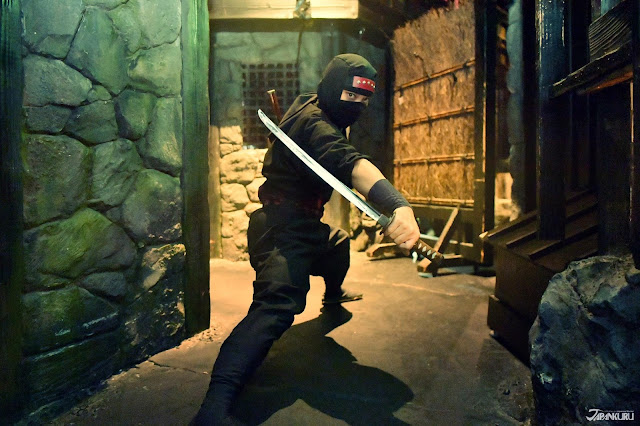 ✬NINJAS✬
In feudal Japan, two types of warriors emerged,
the samurai,
nobles who ruled the country in the name of the Emperor,
and ninjas,
who carried out espionage and assassination missions.

Ninjas are known for possessing a wide variety of abilities and tools,
some real others falsified.
A lot of these specialized tools or abilities
were responsible for starting the legends
that ninja have supernatural powers.

Anymore most people's exposure to ninjas
are in Japanese anime and manga.
There are still ninja today and along with some of its history remaining,
but they are pretty spread out.
For example two areas in Japan with some of the biggest ninja history
are Iga (Mie Prefecture) and Koga (Ibaraki Prefecture).
However,
now thanks to the themed restaurant Ninja Akasaka
anyone who comes to the Tokyo area
can take that exposure to the next level! 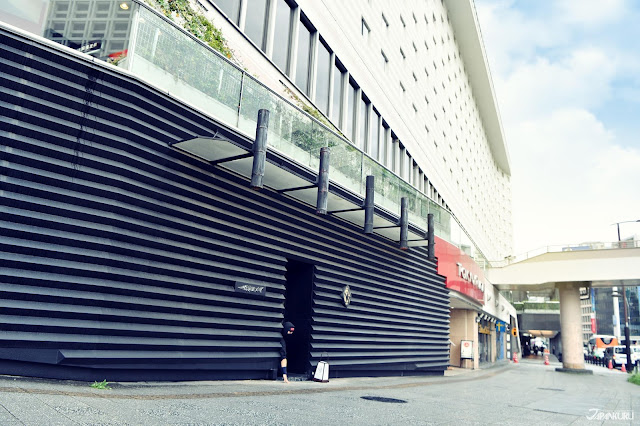 You can take either the Tokyo Metro
Ginza Line or Marunochi Line
to Akasaka-mitsuke Station.

From Akasaka-mitsuke Station,
you want to go towards Akasaka Tokyu Plaza.
Crossing Sotobori Street,
you will see the restaurant to the left.
It may be difficult to find since there's only one small entrance door.

Ninjas are dark and mysterious,
known for being the masters of the surprise and disguise.
You never know what to expect
the moment you walk through the entrance.
Be sure not to set off any traps ;) 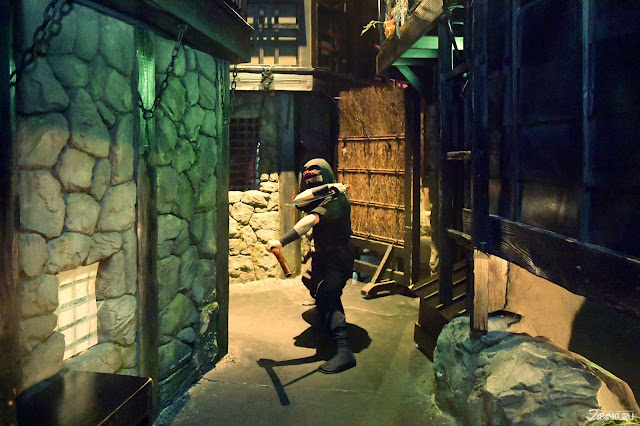 You are led through a series of winding wooden corridors
designed to look like the interior of an ancient Japanese castle.

Like an actual ancient Japanese castle,
the place is filled with secret passage ways
that only ninjas know about and have access too!

Hollywood director Steven Spielberg
visited Ninja Akasaka some years ago,
and signed the wall near the dining area.
Keep your eyes out for other celebrity signatures! 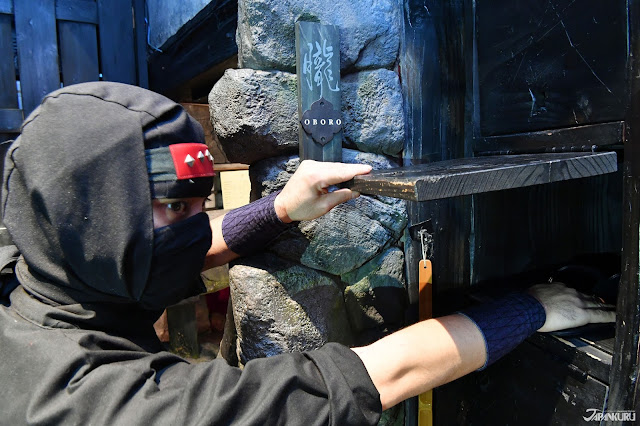 Every detail is thought through perfectly,
even the shoe cubbies!
To open the door to each cubby,
special ninjutsu sword skills are needed. 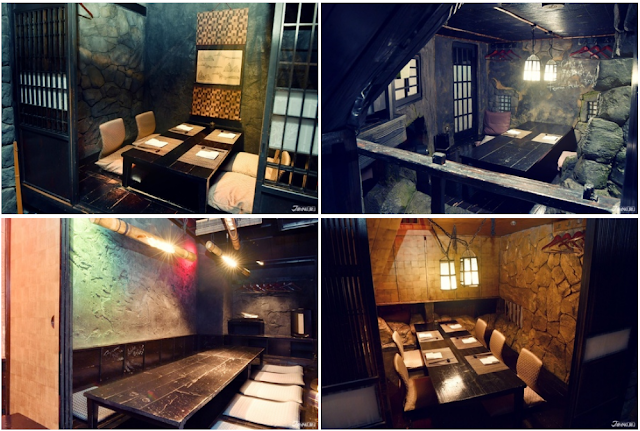 Super cool ninja scroll menu!
You can either order from their alacarte or their course menu.
Both contain visually appealing and yummy ninja themed food.
*English menus available!

For first timers though,
the Yamato Spirit Course (6,999 yen)
or the Hanzou Course (10,000 yen)
are recommended because they include
some of the most interesting themed and diverse foods!

卍
Hard to believe these throwing stars are food!
It may not look like much,
but it's really impressive if you ask us!
Not to mention tempting to throw
卍--- ヽ(^ｰ^o)

卍卍
Our favorite thing is how interactive the themed dishes are.
Any place can just throw some ninja swords or throwing stars on a dish
and call it a ninja dish.
But here at Ninja Akasaka there are dishes that really wow you
and keep your attention and adrenaline going!
They really put effort in the guests experience
and know that it's an important role when eating food.

卍卍卍
We're sure we've mentioned before,
but the creativity here is endless.
Take this treasure chest that has a gelatinous oval with shrimp
(and other cubed food inside)
made to look like an old Japanese coin!

卍卍卍卍
It wouldn't be a ninja restaurant
without a little bit of magic!

We were really tense during the whole heating process.

Ishikawa Goemon cake!
Known as the thief ninja,
although he wasn't actually a ninja!
Goemon was basically the Japanese Robin Hood.
An outlaw/thief he stole gold and other valuables
to give to the poor,
eventually gaining a lot of fame.

You wouldn't expect to see a frog here would you?
For those who don't know,
there is a deep connection between frogs and ninjas.
It goes back to folklore about a ninja named Jiraiya,
who uses magic to morph into a gigantic toad.
In a lot of old traditional Japanese prints,
there is a famous on of Jiraiya riding a frog/toad. 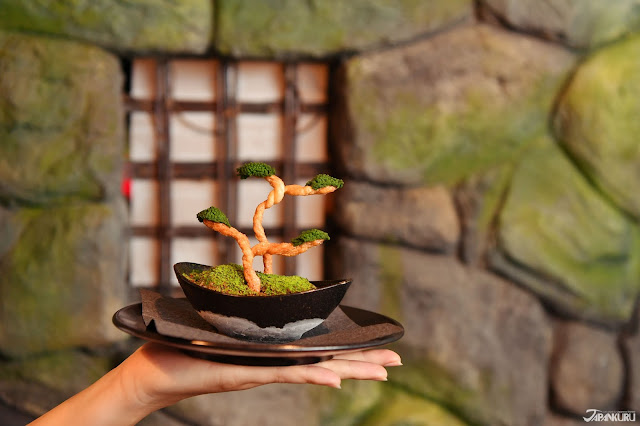 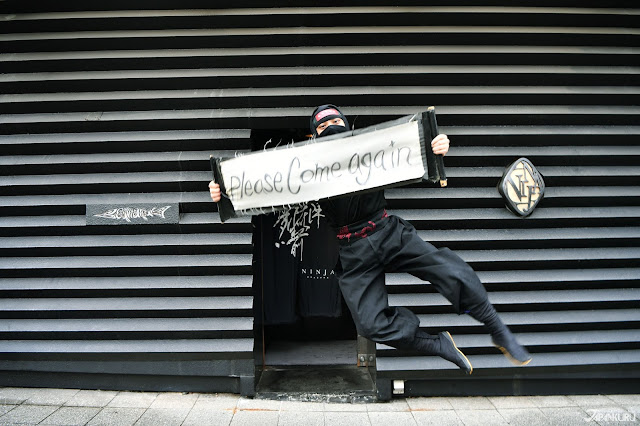 Even if you aren't that into ninja,
you are SURE to be entertained!!
Perfect for people of all ages!
We had the best time here
and can't wait to go again
next time a family member or friend visits!!
You never know what sort of things they'll have next time~