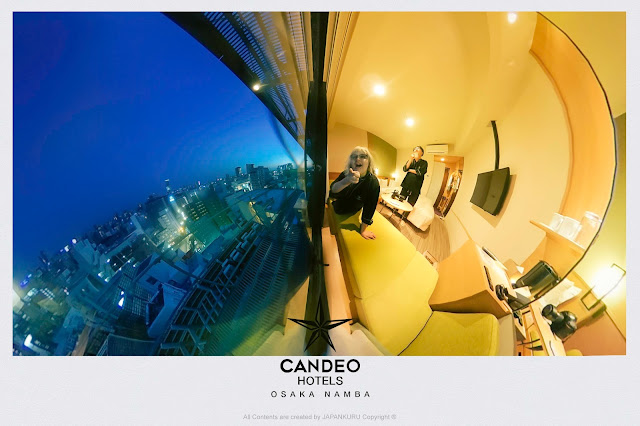 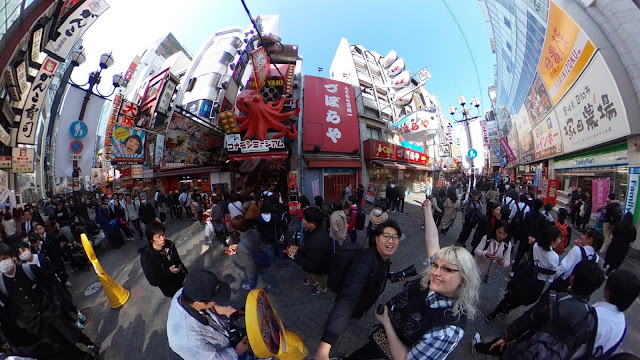 Osaka, the most popular sightseeing spot for Westerners,
is a vibrant city 365 days a year.
It's said that Osaka residents are similar to people in our country rather than in Tokyo because they are more outspoken and less introverted.

OSAKA
A City Where the Past and Present Coexists

One of the reasons that foreign tourists are attracted to the Osaka area is that we can enjoy both past and present.
You can enjoy the ruins like Osaka Castle, Dotonbori Dotonbori, Universal Amusement Park Universal Studios and so on.

A Great Place to Walk around and Eat

You can also enjoy various street foods such as "Don Quixote" and "Takoyaki" that Koreans are looking for during their trip to Japan. 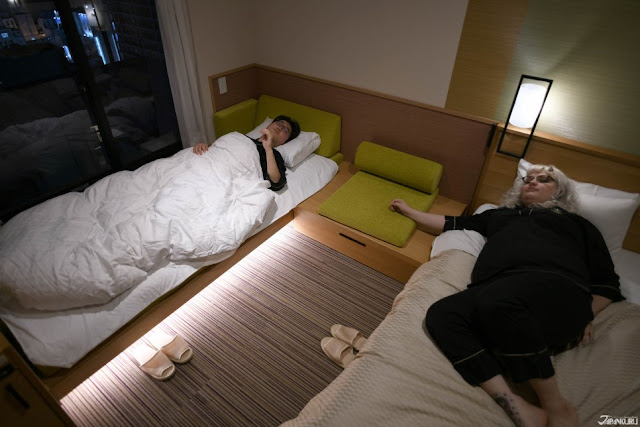 Osaka is now experiencing a "shortage of rooms"
when foreign tourists are crowded.
Therefore, if you do not prepare in advance, you may experience a misfortune to stay in a shabby place at a higher price than others. 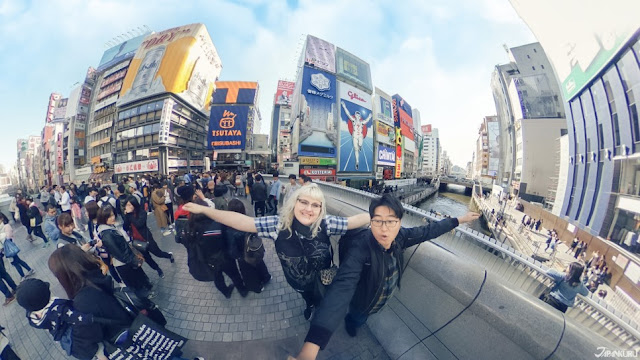 This time JAPANKURU wants to share a hotel that we really enjoyed in Osaka
that made our time in Osaka that much better. 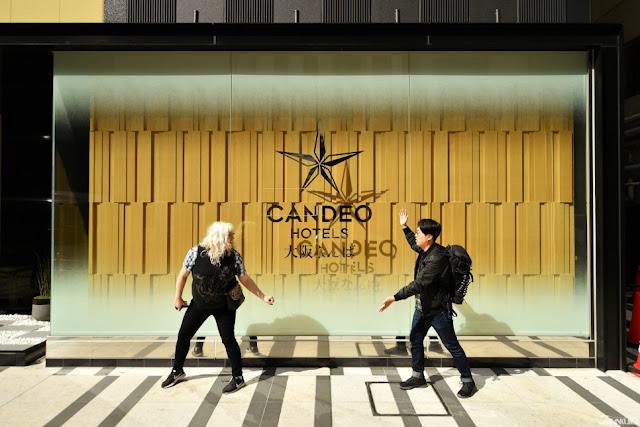 In fact,
CANDEO is a large hotel company that operates hotels in various parts of Japan.
The Osaka Nanba branch just recently opened in July 2017.
Almost all of Japan's hotels are kept in tip-top shape,
but man were we blown away by the beautiful lobby. 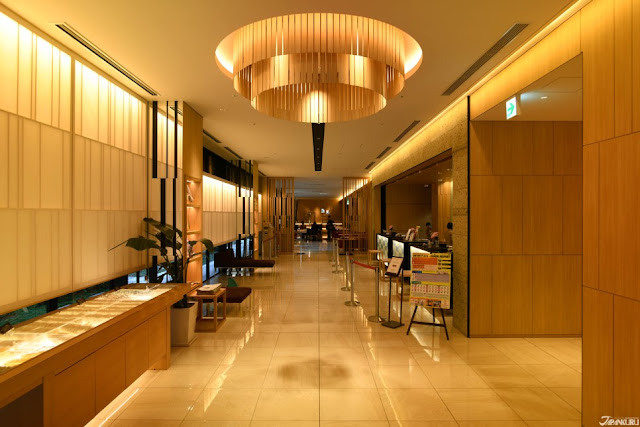 Since the hotel is located in Namba,
which can be considered as the center of Osaka city,
it's in the best possible location for traveling!
It was super easy to go out, explore,
come back and relax in the room for a bit,
then go out for some Osaka nightlife🎶


🛌Get a Good Nights Sleep😴
Rooms
There are a wide variety of rooms here,
but we wanted a view of Osaka so we stayed in the Executive type rooms.
Up to 5 people can stay in both the rooms with the deluxe king and twin,
but if it's adults we would recommend 3 people
(which is what we did, 3 in one room and 2 in another).
We were impressed with how open and spacious the rooms were
for being in the heart of downtown Osaka.

All of the rooms come with a sofa,
but the Executive rooms include sheets and a pillow to turn the sofa into a bed.
It was super quick to set it up,
so that's what we did for the room with 3 people. 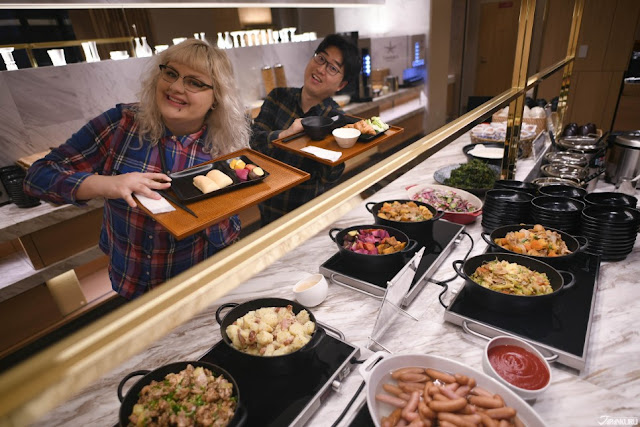 For many Westerners at least,
a hotel's breakfast menu can make or break the overall rating of the hotel.
Even nice hotels in Japan still manage to have primarily Japanese styled breakfasts making it difficult for some people to find anything appetizing.
We loved the breakfast buffet at CANDEO though.
It had the perfect blend of what you would imagine some Asian countries wouldwant to eat for breakfast as well as Westerners. 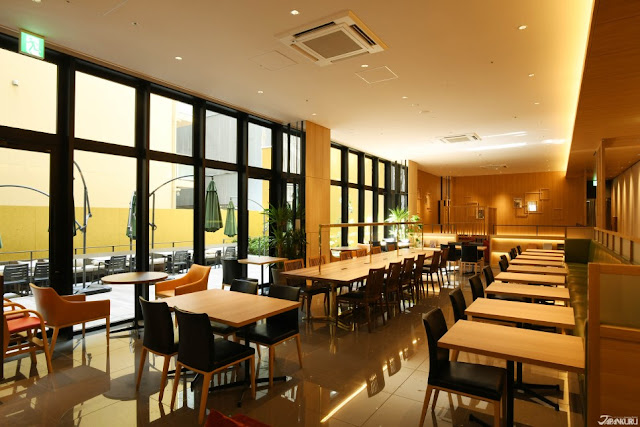 This is only one side of the eating area,
it's really much bigger! 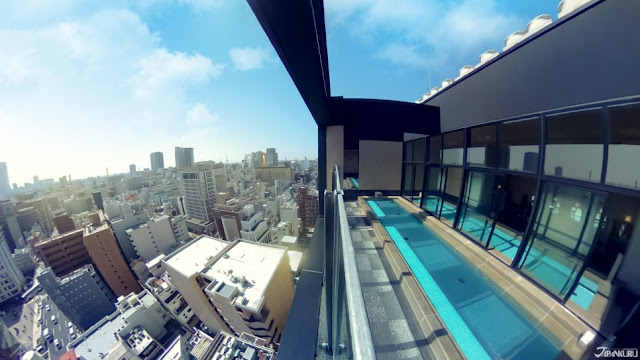 Located on the 17th floor of the hotel is the "SKY SPA",
which is the most satisfying part of staying at CANDEO HOTELS NAMBA.
The men and women hot springs are separated
and this area is only available for hotel guests.
Any time of the day is a beautiful sight,
but as you would expect, the night is the most breathtaking.

There are both indoor and outdoor baths,
and the men have a dry sauna whereas the women have a mist.
It is said that people with tattoos aren't allowed,
however, we saw many other people with tattoos.
Just be prepared.
We double checked with the staff though
and they said if you have like a bandage to cover it/them
that was ok. 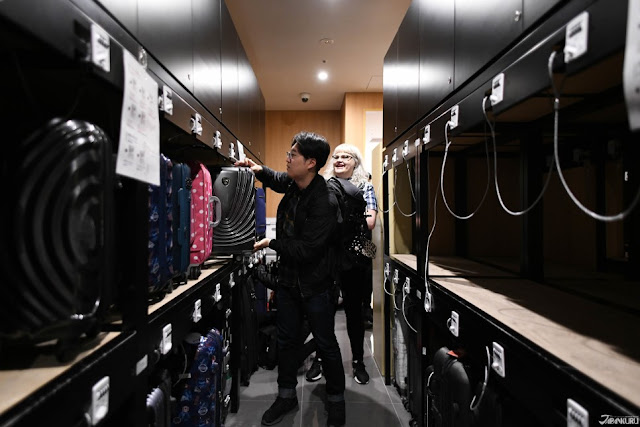 Guests are provided with a free luggage storage room at
CANDEO HOTELS OSAKA NAMBA.
When you arrive earlier than the hotel check-in time
or you can check out of your room but have time before you leave to your next destination, you can leave your suitcase(s) and tour around Osaka hassle-free!.

Japan is starting credit/debit card friendly,
but believe it or not there are still a BIG MAJORITY of places
where you can only pay with cash💸
It can be difficult to know how much cash to bring on an international trip
so having this currency exchange machine helps just in case. 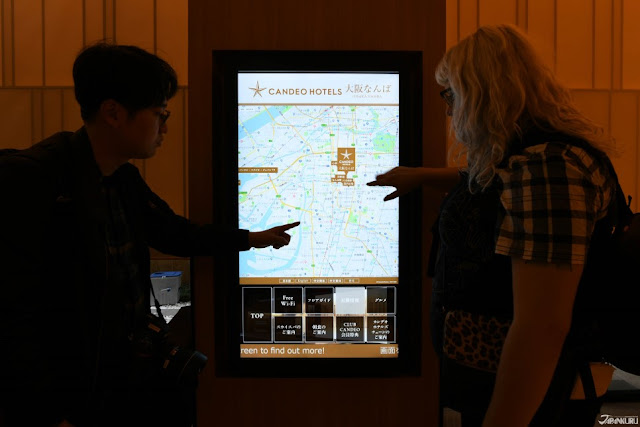 You can get sightseeing information around the hotel
through a large touch panel installed in the ground floor lobby.
If you don't have an idea of where you're going next
this touch panel map helps.

❶
Station Square Parlor DOTON
This is Doton Plaza⇧！
If you look to the left and see the tallest building,
that's CANDEO HOTEL OSAKA NAMBA!!
Close, right!?!?
There are all sorts of shops and restaurants inside Doton Plaza,
but there was one place in particular on the first floor that caught our attention.

watch the video above! ^-^
Your mouth will water for sure!!
🥞Macadamia nut cream pancakes for 980yen🥞 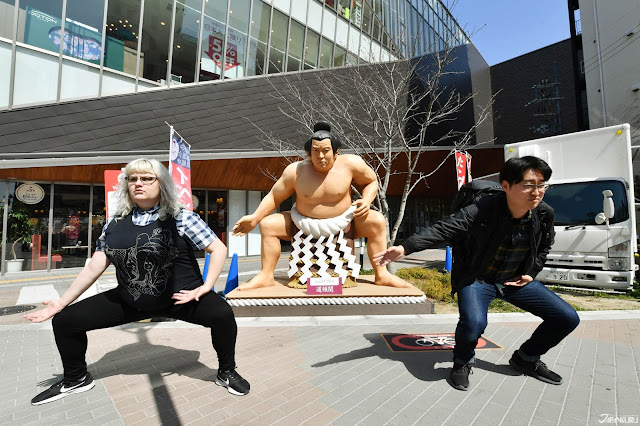 After the pancakes,
we had to get a little sumo action in. 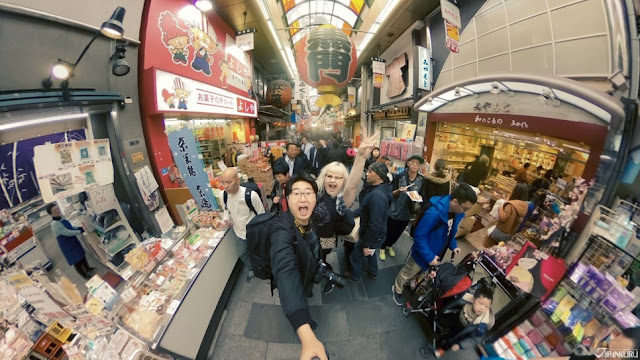 Kuromon Ichiba Market is one of the main food markets in Osaka, Japan, right in the Namba area.
What makes this area so popular amoung Japanese and foreigners alike
is that it's a place that specializes in street food.
You can find other things sold here,
but the food (primarily seafood) is the main attraction here! 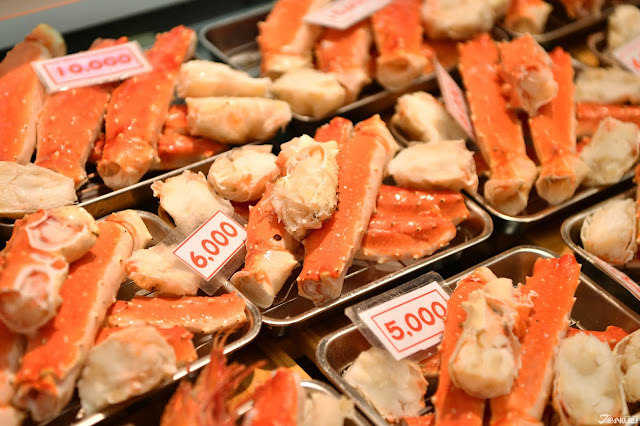 I cook fresh seafood such as seashells and crabs in front of you,
and I can not pass it.
If you are going to visit the Kuromon market, I recommend you to leave it empty.

Jiggly Japanese fluffy pancakes have been all over social media lately.
After seeing videos of a particular cafe's pancakes,
we had to go there for ourselves!

Cafe "gram" only makes 20 servings three times a day,
so we were really lucky to get in!!
We recommend making a reservation if possible. 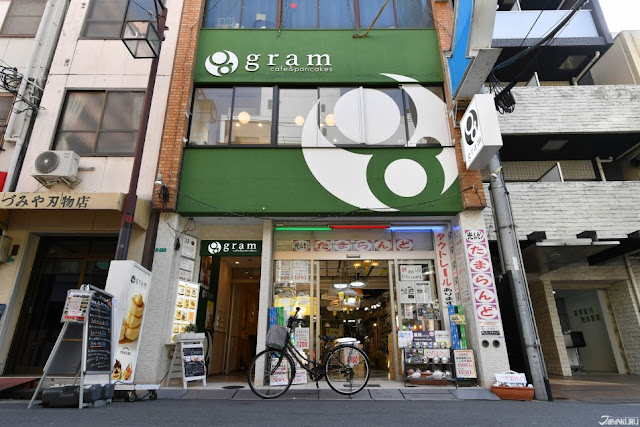 Osaka Shinsaibashi is the first store in Japan,
and stores are now available all over Japan!

It's always fun eating something you can't normally eat at home.
In this case, pufferfish.
Nearby was a Japanese tiger pufferfish restaurant
that served pufferfish in all different kinds of ways.
It was our first time ever actually trying pufferfish by itself,
and since they had it in all sorts of variations,
we tried them all! 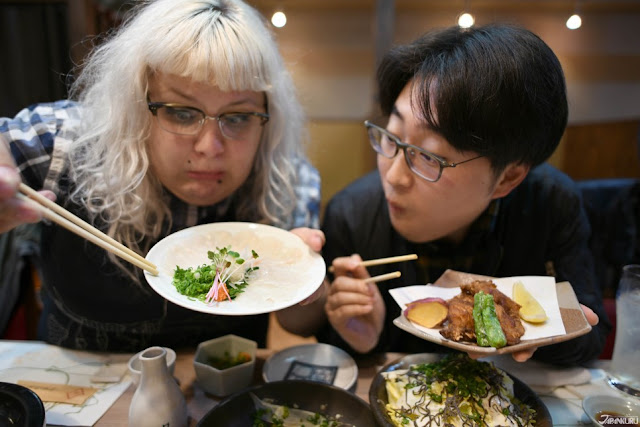 The most common is mega thinly sliced pufferfish sashimi ("tessa" on the menu).
It was almost as if nothing was there, it's sliced so thin.
Apparently, rather than taking one slice at a time,
Japanese people scoop a bunch with their chopsticks at once then eat.
There was also pufferfish hot pot ("tecchiri" on the menu),
fried pufferfish, pufferfish sushi, and pufferfish BBQ
(we actually didn't try the BBQ ^-^;; ).
All of it was good,
but maybe the sushi and hot pot were our favorites.
The fried pufferfish was difficult to eat due to all the bones. 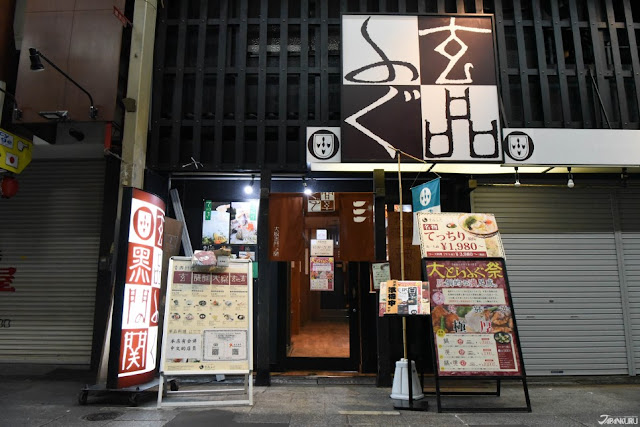 Fugu, or pufferfish/blowfish contains a lot of protein and collagen,
so while living dangerously,
you're actually eating something pretty healthy!
Japanese restaurants can't serve blowfish without a proper liscence,
so there really is no need to worry🐡♡

This place was probably our most FAVORITE in Osaka!!!
This was many of our first time ever hearing about Torame ("Tiger's Eye")
Yokocho, and probably 99% of the customers were Japanese.
So we figured many other people don't know about this place,
and since we had such a great time
there's NO WAY we were going to leave this place out! 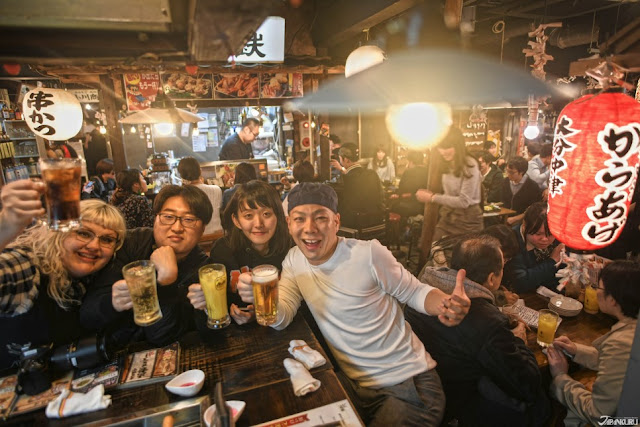 Torame Yokocho is a semi-spacious place that has various of Japanese food, particularly Osaka food, stalls inside.
You are just surrounded by great people,
having a great time, with great food and drinks!!
Don't worry about deciding which stall to sit at,
as long as you find a seat
you are able to order from any of the restaurant stalls in the place.
Just bring the number coin that is at the stall where you are sitting
to whichever restaurant you want to order from,
and that restaurant will bring your order to you! 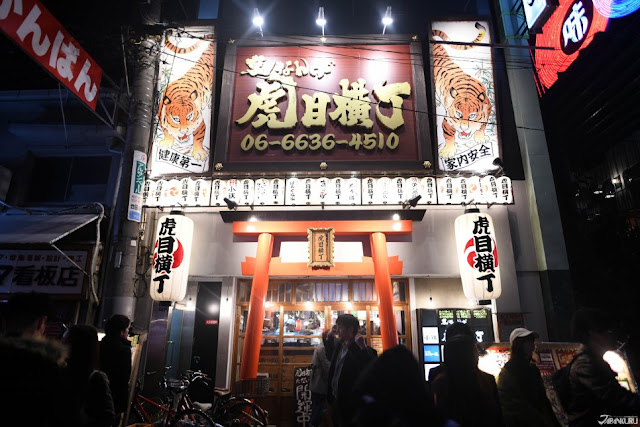 Next time we go to Osaka,
we are DEFINITELY coming back here!!!!!


Anywhere we went
it only took about 15 mins to get back to our hotel!!!
We're telling ya,
when traveling to Osaka,
CANDEO HOTELS OSAKA NAMBA is really the best place to stay. 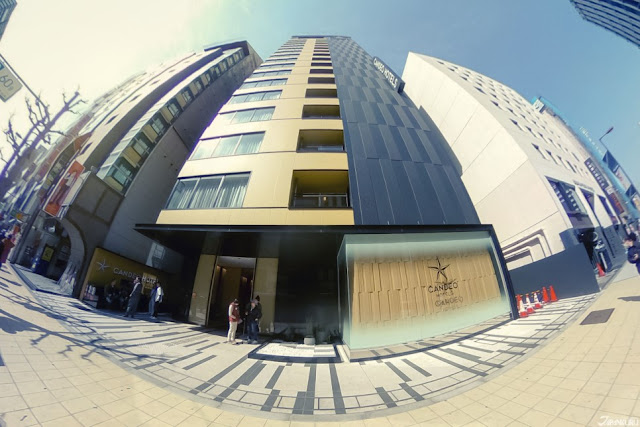