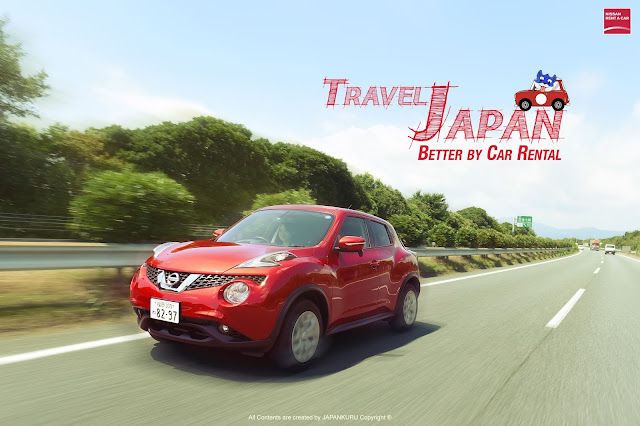 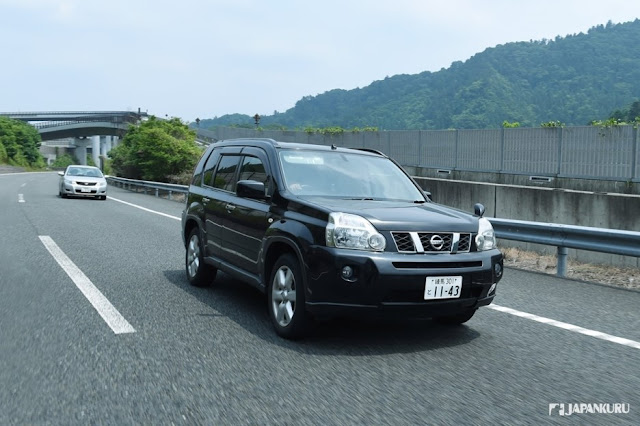 Driving in Japan can be scary
especially if you aren't used to driving in other countries
or the left-hand side.
But it really isn't as nerve-racking as it seems.
You get used to it in minutes and pretty soon
you're thinking less about your anxiety
and more about how fun road trips are!

Since coming to Japan we've grown to miss driving on the open roads,
so we find ourselves renting cars and going on drives pretty often.
We know there are many out there that either do or are interested
in doing the same.
Thus we wanted to put together a short list of
ideas of places to road trip in Japan to drive to.
But before we get into the unknown treasures of Japan,
here are a few things to know when renting a car.

RENTING A CAR IN YAMAGATA PREFECTURE

All kinds of airport transportation is provided,
for example, buses, taxi, and trains.
However,
we highly suggest you rent a rental car which can make your journey
easier and more comfortable!!At the Yamagata Airport, you can find rental car companies like NISSAN, TOYOTA, NIPPON RENT-A-CAR, and Times Car RENTAL.
We recommend renting through NISSAN Rent A Car
mainly because of their quick and easy reservation service. 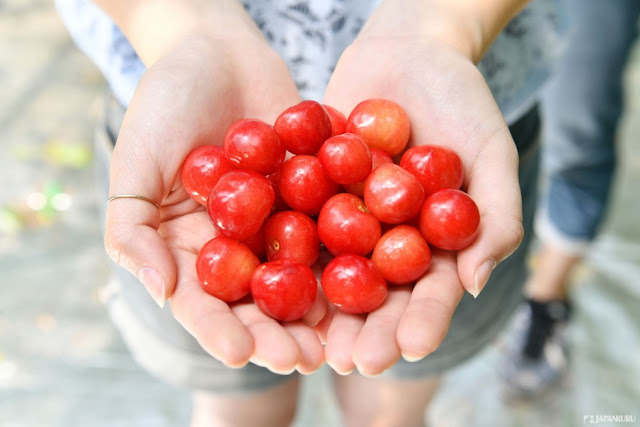 If you were to ask a Japanese person what Yamagata was famous for,
we're sure their first answer would be cherries.
Although there are cherries being produced all over Japan,

Yamagata is the most popular in producing around
70% of the country's production of cherries🍒✨
In Japan, you can go cherry (or other fruit) picking!!
Being that there are so many places to pick cherries in Tendo,
you won't have any problem finding a place.
We went to Oshokaju (Ohsyo) Orchards and had a really great time!

Japanese cherries taste a bit different than say American dark cherries.
Of course, they would, but it never really occurred to us!
Due to Yamagata's difference in temperature,
the fruits that are grown here are especially sweet and juicy
compared to fruit from other prefectures.

Normally the best time to go cherry picking is from the middle-end of May to the end of July!
It's around that time you should be able to pick the most famous type of Japanese cherry, the satonishiki!
You get 30 minutes to pick cherries,
but the nice thing here is that you can also extend it to 60 minutes if desired!
Anything big plus is there are many ways to enjoy cherries at the orchard💖🍒

Reservation for fruit picking in August and after (Japanese)
https://ohsyo.sakura.ne.jp/reserve/index2.php 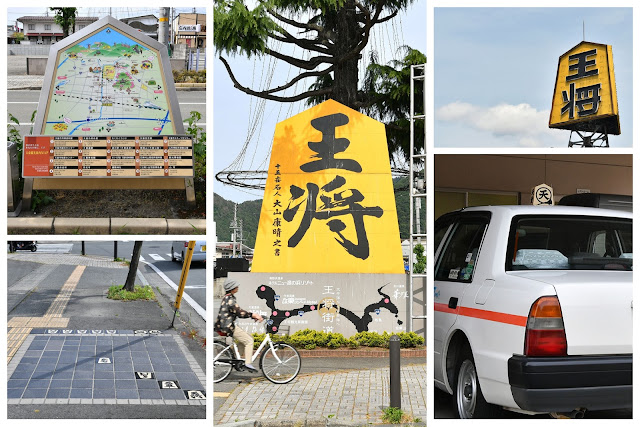 Tendo Shogi Museum (天童将棋資料館)
Since Tendo has the largest shogi piece production in Japan,
we thought we'd go to the shogi museum
where you can learn everything about this traditional Japanese chess-like game. 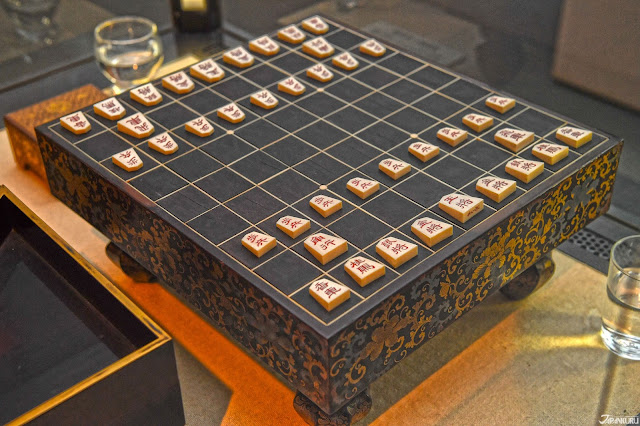 Shogi was originally developed and started in India back around B.C. 300.
At this museum, we learned about things like
how it was introduced to Japan and the world and
the manufacture of shogi pieces.

You can even decorate your own shogi pieces!!
This was, of course, the most fun! 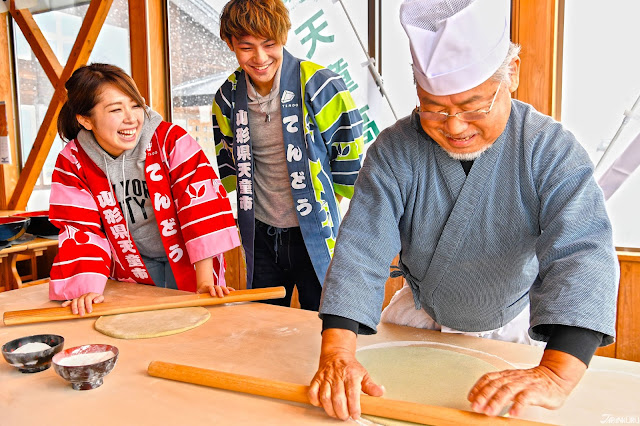 After visiting the Shogi Museum,
we went to Tendo Kogen Family Land (天童高原ファミリーランド),
where you can make your own buckwheat (soba) noodles and eat them!

The buckwheat noodles are actually made with dewakaori buckwheat
which is grown at Tendo Kogen.
It does smell way better than other buckwheat.

🍒For more info on Yamagata travel⇩🍒

An Amazing Hot Spring Experience in Yamagata Prefecture Part I

Kanazawa is located in the central part of Japan in Ishikawa Prefecture.
Kanazawa is selected by UNESCO as a City of Craft and Folk Art,
so there are plenty of unique landscapes and sightseeing spots for to visit.
Moreover,
Kanazawa hasn't been involved in any wars or struck by natural disasters
in the last 400 years,
so it's said that Kanazawa is a city of luck!
It's also called "a second Kyoto"
since Edo style streets and buildings can still be seen there today.

RENTING A CAR IN YAMAGATA PREFECTURE 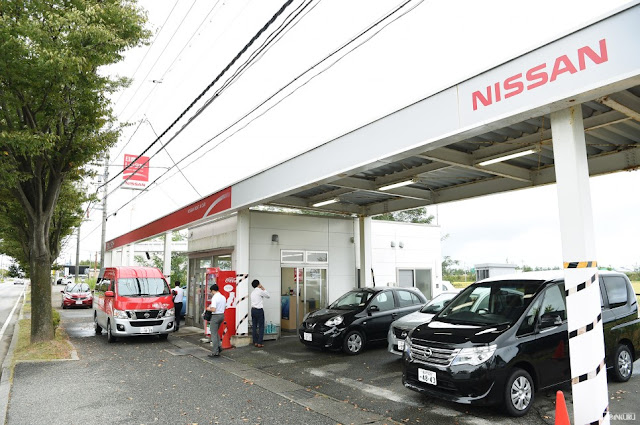 There are a variety of cars available at Nissan Rent-a-Car,
but since we always have so much luggage we tend to go for a bigger car. 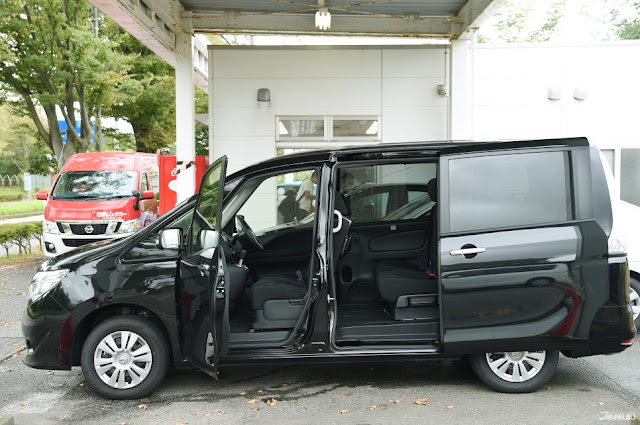 During our trip to Yamagata, we rented the NISSAN SERENA.
This series is still really popular for not only us
but travelers and other renters in Japan.
Super easy to use,
just input the map code and the GPS will take you to where you want to go🗺🚘 Chirihama Beach Driveway is the only beach in Japan
where you can drive your car. 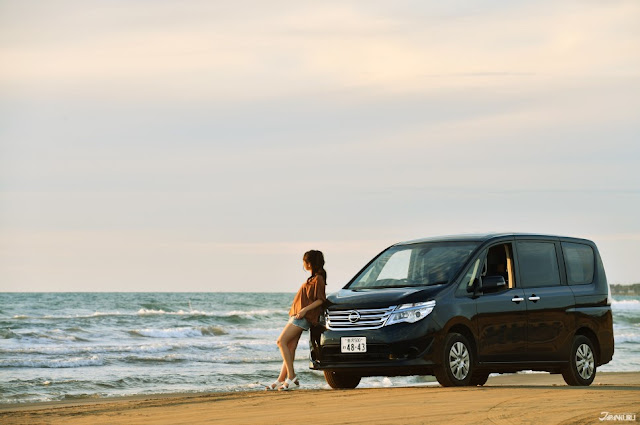 The beach stretches out to almost 5 miles (8km) and is along the Sea of Japan.
Access and dring along the beach is totally free,
making this a prime spot for parking your car
and having a beach BBQs while enjoying the water. 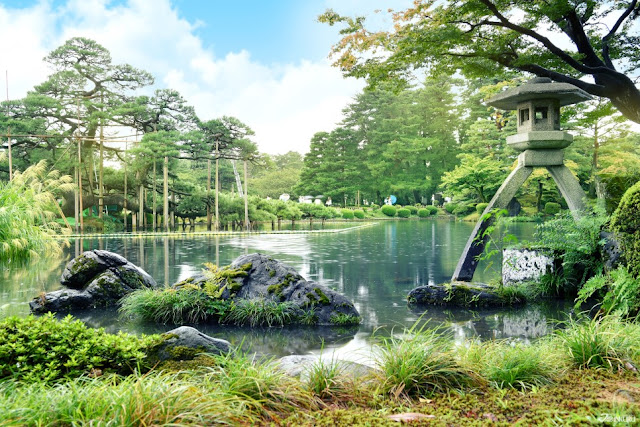 Known as one of the 3 most beautiful gardens in Japan,
Kenrokuen has a wide variety of trees, flowers, and plants
(cherry blossom, autumn trees, plum blossoms, etc) giving this park
many looks every season regardless spring, summer, fall, or winter.
Which is something rare at many gardens.

Kinrokuen was first opened to the public on May 7, 1874.
It was in 1922, it was named as one of the National Site of Scenic Beauty,
and in 1985 it was selected as the most honorable rank
equivalent to a National Treasure.

The garden is also the outer garden of Kanazawa Castle,
which means you can also go to Kanazawa Castle within minutes!
There is a pass which allows you to visit both
Kanazawa Castle and Kenrokuen for 500 yen,so we recommend you getting that if you'd like to check out both! Free admission for an early visit is available.
Please check out the date and time here. 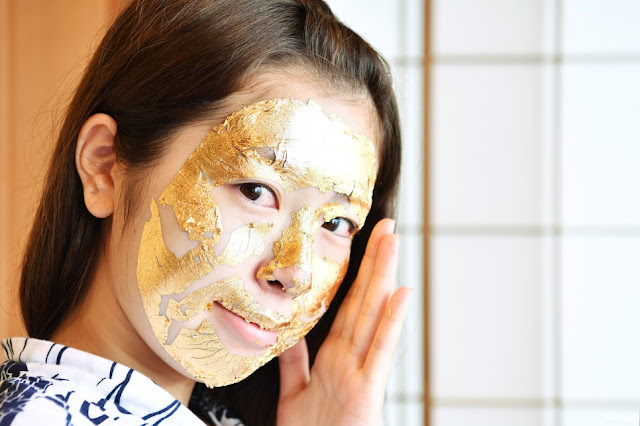 Gold leaf is essential for Japanese traditional crafts. Crafts that use this technique are mostly made in the cultural city of Kanazawa in the Hokuriku region.Which is why it's known by the name of "Kanazawa leaf".
You can buy Kanazawa leaf products in Tokyo
but if you're actually in Kanazawa,
why not take a gold leaf bath!?!


This special rice bowl has appeared on TV and in many magazines in Japan.
It's a big rice bow that contains sweet shrimp, salmon roe, minced tuna with leaks, Japanese yellowtail (amberjack), salmon, squid, octopus, crab, sea urchin, and mackerel!
Woh!!
All of the seafood is caught from a nearby peninsula,
enforcing its "freshness" appeal.
If you wanna try the limited menu, it's best to make a reservation in advance!

🏖For more info on Yamagata travel⇩🏖

Take a trip to the golden town, Kanazawa in Ishikawa Prefecture! ~ Day 1

Take a trip to the golden town, Kanazawa in Ishikawa Prefecture! ~ Day 2 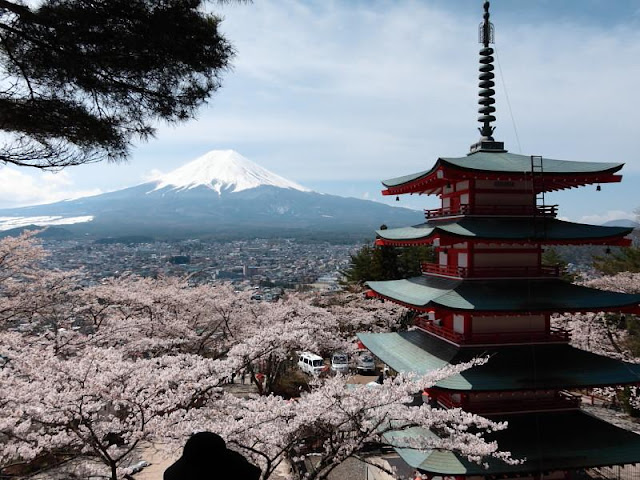 Yamanashi Prefecture (山梨県, Yamanashi-ken) is located immediately west of Tokyo surrounded by natural beauty such as
mountains and mountain ranges that designated as national parks.
The beautiful symbol of Japan, Mount Fuji is separated
between Yamanashi Prefecture and Shizuoka Prefecture.
The northern part and the Mt. Fuji Five Lakes are located in Yamanashi.

RENTING A CAR IN YAMANASHI PREFECTURE

There are hundreds of Nissan Rent-a-Car chain stores all around Tokyo,
so there's no need to go to a specific one just whatever is most convenient!

For camping, we got that NISSAN X-TRAIL,
which has been recommended for driving through nature 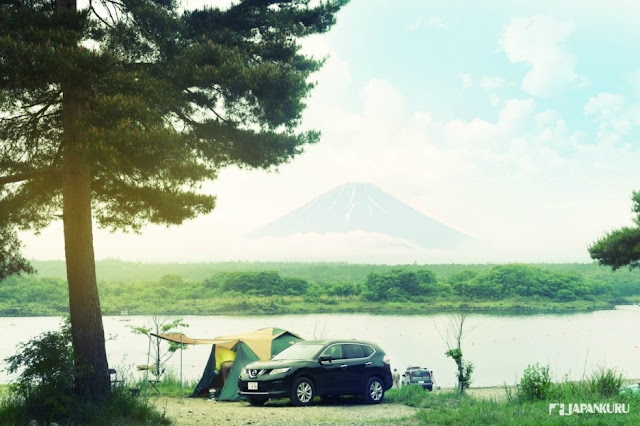 ▲ A nice place for photography!

Because the Lake Shoji is narrow and we can see Mount Fuji from the front,
so it has attracted many photographers to come here to record this majestic Mountain.
In Japan, Mount Fuji reflected on the lake is called "Reverse Fuji"
This is a rare spectacle to see!!
Good luck!!!
Fantastic Mountain

If it is good weather, you can see the view at midnight like the photo above.
Can't you imagine your eyes???
Mount Fuji, what a holy mountain!!!

Lake Shoji is the smallest one among the Five Lakes,
but it also has the most beautiful scenery!!
If luck is on your side,
the weather will be nice and you'll be able to see Mount Fuji from the front!
So this is where we decided to camp💖🗻
There's a camping site, Shojiko Camping Cottage,
that allows you to camp in the area for between 800yen~1000yen/person
(which is roughly $7~$9).
You can even rent a tent here if you don't have one of your own!
ALSO!
Glamping has started making its way to Japan,
so for you glamping lovers you can also do that here at Lake Shoji🌟

Then from there it just becomes a great camping night! 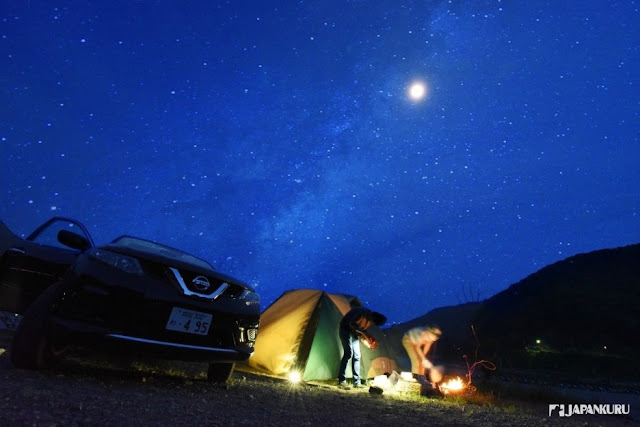 If you need some camping or outdoor gear,
there are 2 really good stores in Tokyo:
Victoria in Akihabara
and
Odakyu HALC in Shinjuku

🏕For more info on camping at Mt Fuji Five Lakes⇩🏕

🚙 Road Trippin to the Best Attractions in Kagoshima, Japan 🚙