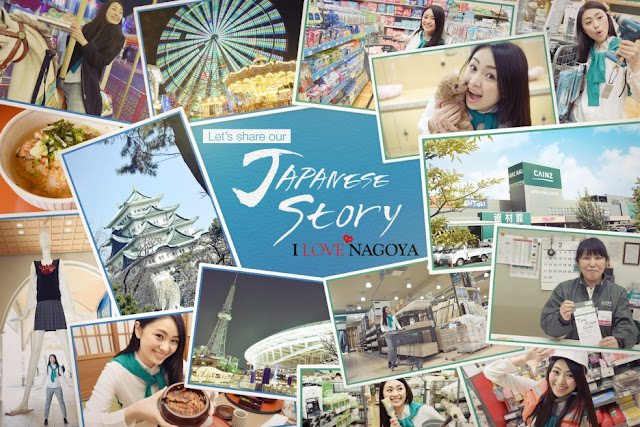 Japan has some seriously densely populated
metropolitan areas. Some of which you may be
very familiar with like Tokyo, Osaka, or Kyoto
or even Okinawa. But did you know that
Nagoya (名古屋)is the third largest city in
Japan!?

Located in Japan's Chubu region and a central city
of Honshu island in the middle of Aichi (愛 知 県)
prefecture and Toyota city (豊田市). One of Japan's
three major international trading port cities followed
by Yokohama and Kobe.
It doesn't fare too bad as a tourist city with about 23
million people visiting annually.

Today we'd like to tell you a little bit about
life in Nagoya so without adieu... let's go! 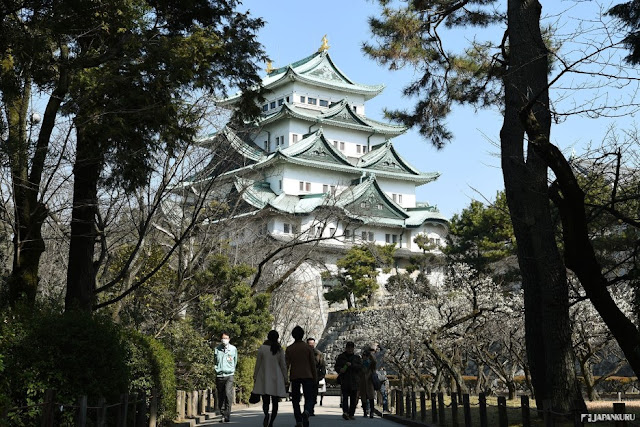 Nagoya Castle, Osaka Castle (大阪 城), and the
magnificent Kumamoto Castle (熊 本 城) are
counted as three most beautiful castles in Japan.
Oda Nobunaga and Toyotomi Hideyoshi, seeking to
unify all of Japan during the Edo period by bringing
peace to warring states. Tokugawa Ieyasu completed the
trinity of these so-called 3 great heroes of Japan.

Tokugawa Ieyasu (徳 川 家 康) commissioned the
re-construction of the castle because originally, the
Imagawa clan (今 川 氏) had already built it up from
1521 to 1528. After several years of unification of
the castle ruined from war would be re-built in order
to chop
up Ieyasu's power base in 1610,  finishing construction
in 1612. Up until 1867 the shogunate (江 戶 幕府)
Tokugawa Owari (尾張) family had used the castle.
In the most recent history, the hotel tower has been
restored using reinforced concrete due to the bombing
by US troops at the end of World War II in 1959.

Even though the castle has been restored, the citizens of
Nagoya aren't lacking a single ounce of pride in their lovely
castle. With the shachihoko's tail (し ゃ ち ほ こ: fish bodied tiger
headed creature) always facing the sky,  it's always a flashy
sight to behold. 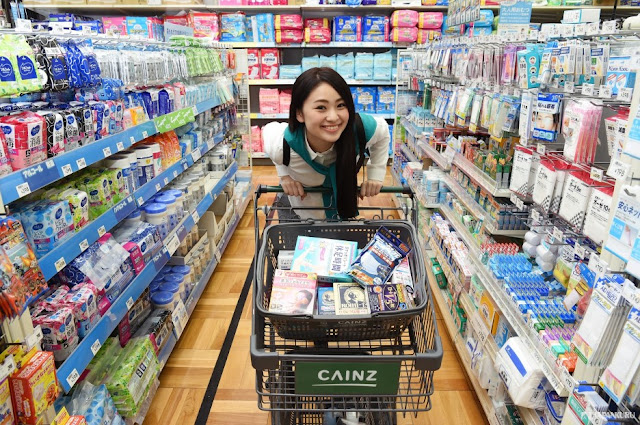 Our shell of armor for Nagoya travel!

We're going to bring you the blockbuster attractions from
this year's trip to Nagoya. Including a visit to this massive
'home center' CAINZ! In case you missed our last article. 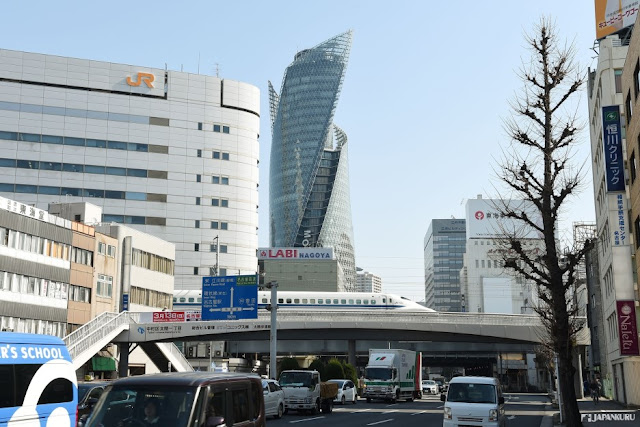 Nagoya Central Station and Nagoya's landmark building
'Central Tower' is a towering building worthy of your
attention.  The central terminal is no slouch as well.
It's a mega station also listed in the Guinness Book of
World Records for world's largest facility built over a
railway station!
The streets around the station are just as impressive,
just look at the bullet train go by! ... 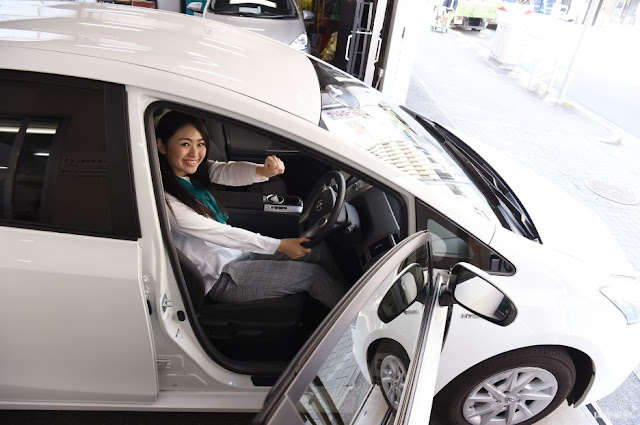 Let's get our MOVE on in a Move 'rental car'

Today's new trend in Japan! Instead of traveling
by train the whole time, get a rental car and
explore much more!
Take your international drivers license and hop into
a multi-lingual rental car and explore your way around
Nagoya.
You can find rentals at the Central Japan International
Airport (Centrair) and it happens to be in a central region,
so you'll have many great places to visit such as such ...
Gifu (岐阜), Takayama (高山), Shirakawa (白 川 郷) and
Kanazawa (金 沢). 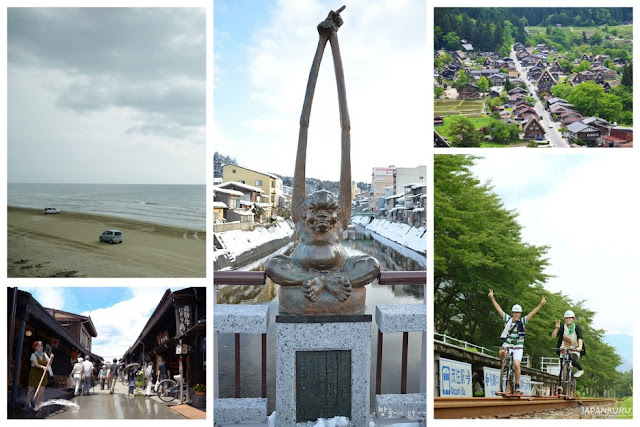 The many attractions to explore ...

Seems like there's something in every corner of Nagoya
for your enjoyment. 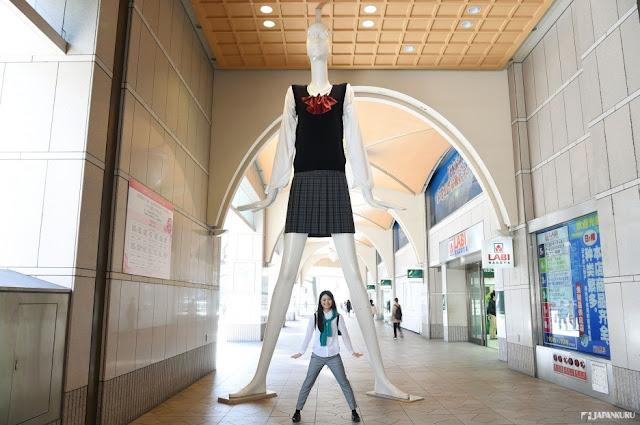 Nicely dressed in a schoolgirls uniform with slender legs (?)
What is this!?
If you make your way to Nagoya Station you can witness
an exhibit in ongoing modern art. This oversized girl is known
to all as simply Nana-chan (ナ ナ ち ゃ ん). '^^ 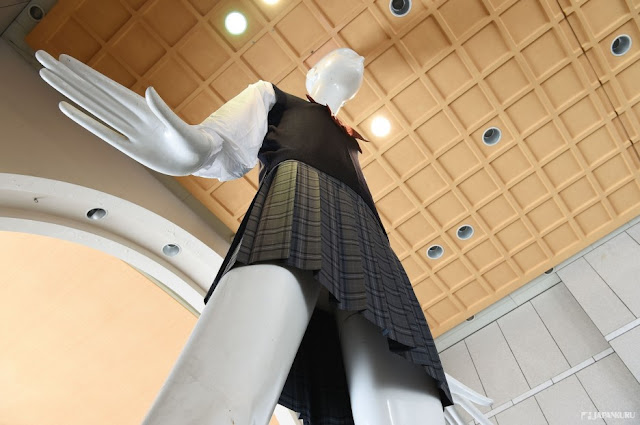 Why is she here?

She first appeared in April 28, 1973, that's right
41 years ago! She stands about 6 meters tall
weighing over 600 (!!) kg. Occupation (?) Apparently
she works for the Nagoya, Meitetsu (名 鉄 百貨店)
Public Relations department. She is used to show
the latest fashion.
Nana-chan get's her name from the Japanese
word nana: ナ ナ meaning seven. The origin of the
name is from the Seven Museum is formerly known
as the Young Museum from "7". As a PR staff member
that is how she got her name...
The first time Nana-chan was introduced, a lot of people
were truly astonished, but now people even plan whole trips
around it 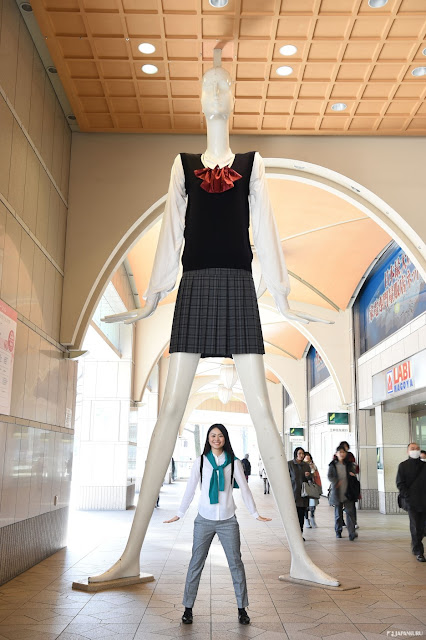 Nana-chan also started to wear clothes, I'd say in the last
several years ... when she first came out she would
wear aprons indicating the status of sales only twice in
summer and winter each year. When compared to last
year it's easy to see she only changed clothes about
27 times.
Some people think she just stays dormant, and for the
most part they are right, she doesn't move. Although
she is a mannequin so she can be positioned in
different poses.

Recently Nana-chan has become an international sensation
via social networking according to visitors to Nagoya. Just
search for pictures online and you'll be surprised.

Glad we got a chance to meet a legend.. 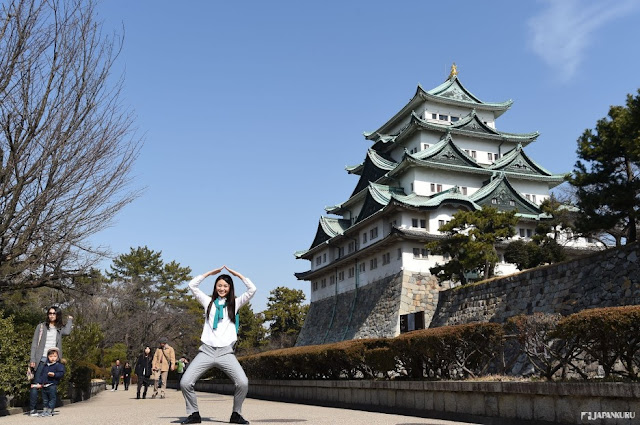 A trip to Nagoya almost requires a picture
with the castle (common sense).
Lately this dorky pose has been gaining some
traction in the social networking community
and it's known as the  "Oshiro pose"
(お 城 ポ ー ズ)!' (oshiro =castle) 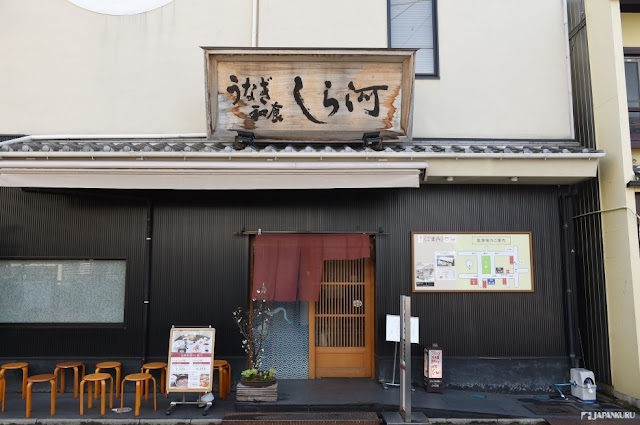 Pork cutlets with miso sauce (味噌 カ ツ) and Ni
komi udon (煮 込 み う ど ん) along with fried chicken
wings make this menu hard to resist.
Nagoya portions are actually pretty ample and that's
coming from a big guy! Can't wait to try the eel dishes!
One dish that is an absolute requirement when visiting
Nagoya has got to be the Hitsumabushi (ひ つ ま ぶ し). ^^

Enter into Shirakawa and you'll find all kinds of
information painted on the signs in the shop. 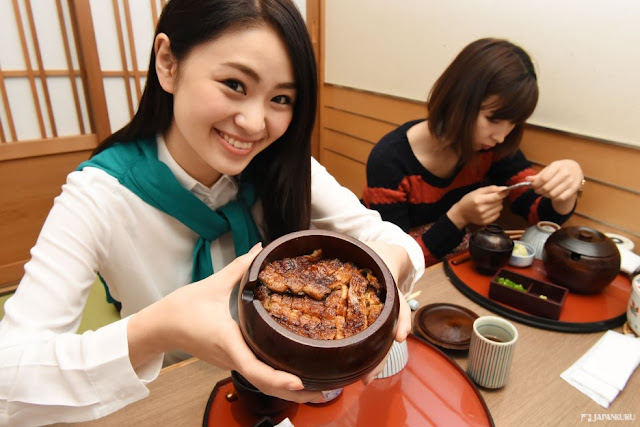 It's basically a rice bowl filled with eel. To the
untrained eye it may appear mundane but I'll assure
you the taste is anything but.

The fact that the eels were cooked using charcoal should
already wet your appetite. A dish such as this wasn'T
just made in a day, it's instead something that's been
going on for over 100 years!! 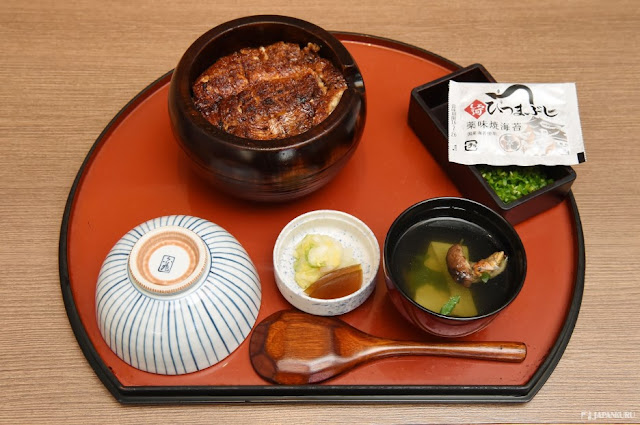 As is, you can eat from the bowl using a spatula.
It's quite hilarious to actually watch someone eat
it this way...As you can see you actually have
set meal that also includes horseradish, leeks, etc.
each one to be enjoyed together for a perfectly
balanced meal. 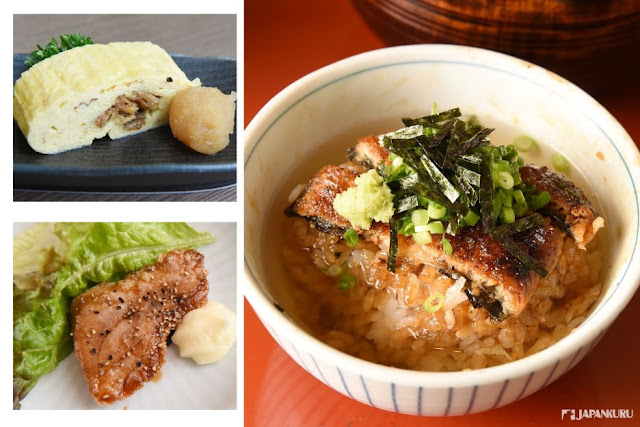 The highlight of the transformation!

Now let's give you a chance to try something
amazing. Add broth to the rice, and mix in some of the
vegetables to make your own ochazuke! This is
actually a customary way to enjoy Hitsumabushi
that most foreigners don't know about until
they are instructed by a polite person that
they are enjoying it wrong.

We figured if you're going to try it, might
as well do it the right way. Although the price
may be a bit steep it's highly recommended for
a great meal that will have you scraping the bowl
for more.

If you come to Nagoya, make sure you
eat some Hitsumabushi! 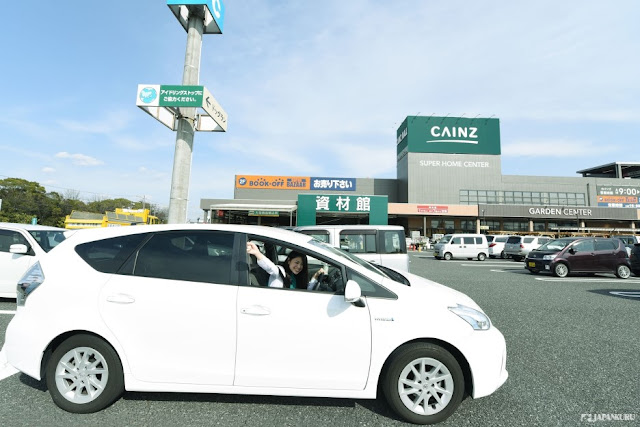 Quick-look at our fresh new ride and
the miracle shop CAINZ. This shop is literally
made for the DIY enthusiast that exist around the world
and can be most likely compared to a Home Depot
from the states. Specializing in various products including
everyday goods as well. Because of the sheer size of the
store you won't find it in cities, but instead only in
more rural areas where space is plentiful.

In Japan, CAINZ are flagship stores for what it means to be
a home center store.  As these mammoth home centers make
up over 200 stores nationwide in Japan, recent logo changes
have done much for changing the appeal of the stores
garnering love of the design and of the products as well.
Mmm ... They definitely have a clear and present image in
this home center industry.

As soon as you enter you'll see the massive scale
of this shop. A huge shopping destination covering all
facets of the market. Forget supermarkets because
this may be a new breed of hypermarkets.
Shopping for the realistic life of the Japanese people
can be done here and finding ways to expand on
improvements to your home. 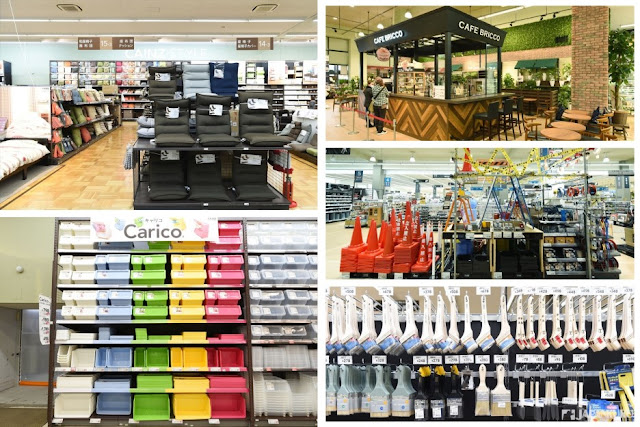 A variety of goods

Just the tip of the iceberg huh? You can
find endless supplies of a variety of items.
From dairy products to household goods,
gardening gardening, home décor home decor
...oh and there's a pretty  café too ^^
In short, it might be called "the Holy Land of DIY"
even though they refrain from calling themselves
so. To browse while on vacation might be dangerous
because you won't get a chance to bring it home
with you, or so you would think until SHAZAAM!
You find out there's online shopping as well....^^ 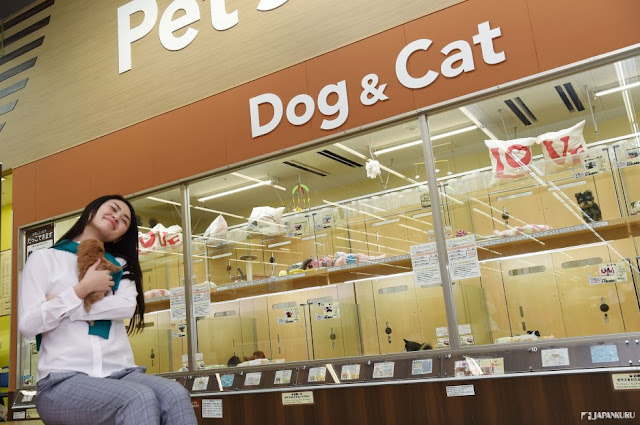 These pets will devour your SOUL

Just one more thing that makes CAINZ so
lovely... Specializing in supplies for fur-balls the
'Pet's One' shop is there to steal your attention
by imprisoning helpless pets in glass cages in
hopes one generous soul will come liberate
them...Well played CAINZ... bravo!^^

DIY culture, similar to pet culture in Japan is blowing
up! 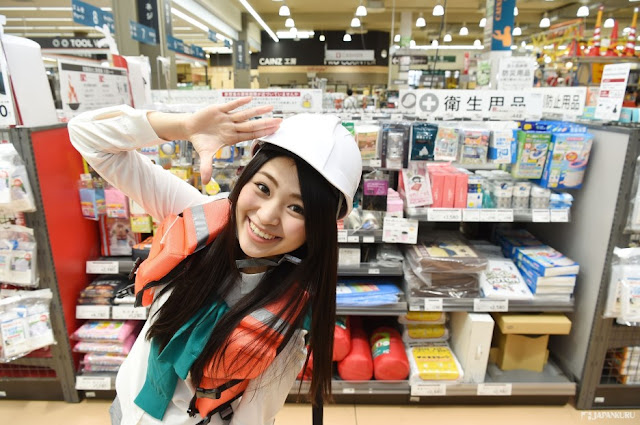 Unique products that can meet because of Japan

Do you live in a place that doesn't experience much
in the form of natural disasters? Well Japan has quite
a bit and as a result resident's are somewhat
prepared for the worst! In CAINZ you'll have a unique
opportunity to view these goods and try them out
for yourself. A moment in time in Nagoya

CAINZ has over 200 locations across Japan. For this
trip we showed you the Nagoya Minato location nearby
the Port of Nagoya. Tokyo is said to have six stores. All
of which are within reach from city centers via the
subway.
For the nearest location to Tokyo, try the Minami
Sunamachi (南 砂 町) SUNAMO location.  ...take the
Metro Tozai Line to Minami Sunamachi Station
(東西 線 南 砂 町 駅) and just walk 5-minutes to unlesh a new
world of shopping. 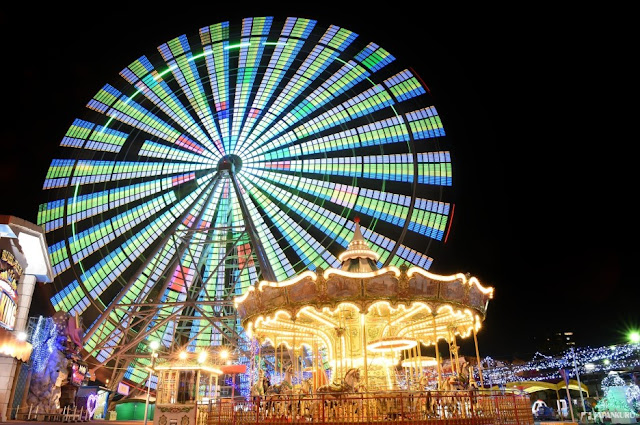 About a 5 minutes drive from CAINZ,
Nagoya Port Sea Train Land is a great
place to re-connect with your inner child.
But ... Oh, by the way ... the giant ferris
wheel can actually be seen from the parking
lot of CAINZ. Let's take it for a ride eh?

This amusement was a great choice,
and with the name Nagoya Port Sea Train Land
you're sure to enjoy the beautiful smells of the
ocean as you wander this carnival. The night
view is also quite amazing so we recommend
checking out the sunset from the ferris
wheel then exploring the park after
the sun goes down. 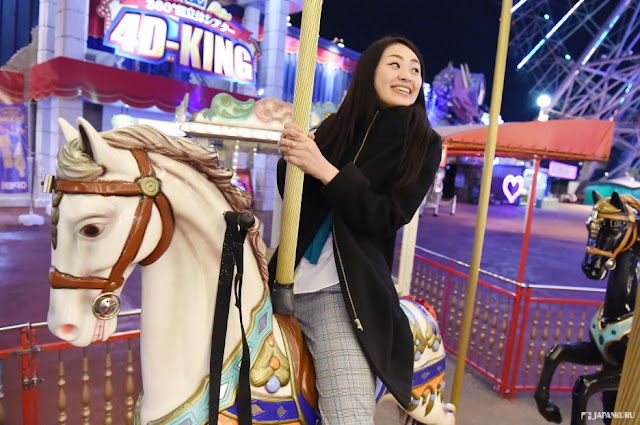 This Merry-go-round ride was lit! ^^
Getting on rides such as this take us back to our
childhood. Almost romantic, a callback to the old
days of dates at the fair! 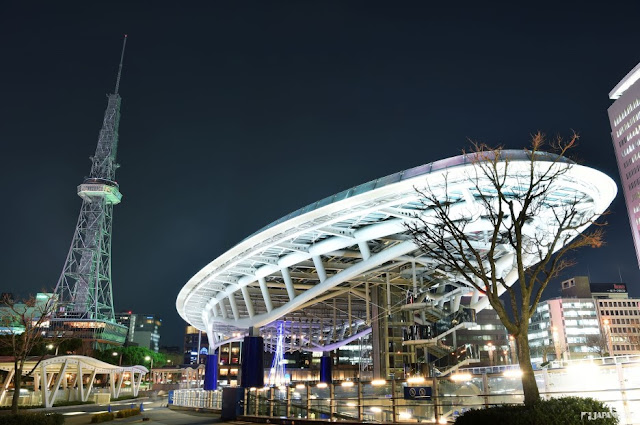 A lovely night view of Nagoya is exciting surprisingly
interesting.
It's almost something out of a sci-fi flick with
the towering  "Oasis 21" "Water and Light" theme.
Sitting at a height of about 14m, and underneath
an artificial pond where you can watch water flow
from the ceiling of the ground.
At the First floor, there is a bus station, and an
underground shopping center.
Nagoya TV Tower looks oddly familiar... ^^ 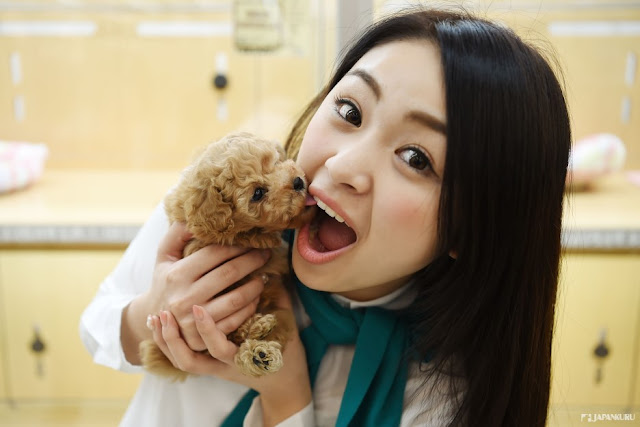 Third day in the big city ... a fateful meeting!

This Nagoya trip was a great encounter with
a variety of things. Meeting with "Nana-chan",
enjoying delicious meals, memories of the
amusement park, etc...And the Tokyo Tower
brother from another mother!

We've definitely seen and experienced quite
a bit. But perhaps the best experience was CAINZ.
There's something about that personal shopping
space with everything you could imagine that has
us hooked...

Can't wait until the next time we can go back...