Kagoshima is nicknamed "the Naples of the Eastern World" because of its beautiful bay location as well as its warm and humid climate and the Sakurajima active volcano, which forms one of the major parts of the city's landscape.
Kagoshima is the capital of the Kagoshima Prefecture and is one of the largest cities on the Japanese island of Kyushu.

Since it is so far south, it takes some time to get there (but totally worth it!)
Access by bullet trains (shinkansen), air planes, and even night buses are available from practically any main port (Tokyo, Osaka, etc).
The climate in Kagoshima tends to be dry but cool in the winter, but summers are hotter, with wetter weather in the spring and autumn. 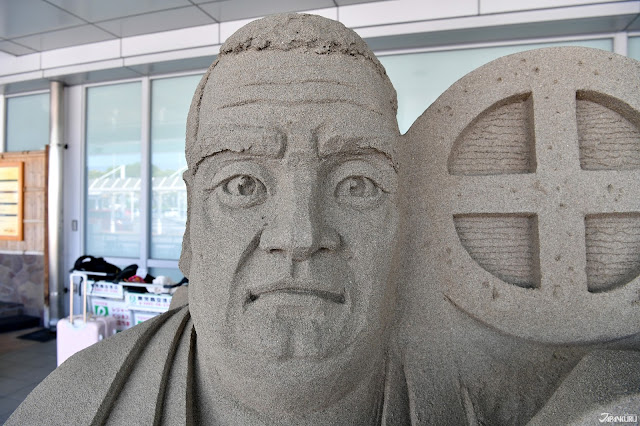 Saigo Takamori (1828-1877), aka Saigo Kichinosuke, is one of the great tragic heroes of Japanese history due to his involvement in the Meiji Restoration.
To give you a little background, Saigo played a huge role in the overthrow of the Tokugawa regime in the 1860's culminating in the Tokugawa's military defeat at the Battle of Fushimi Toba outside Kyoto in 1868. Saigo was one of the leading generals of the royalist forces and succeeding, finally defeating all shogunate forces and lead to the restoration of the Emperor as the font of political power in Japan, rather than the shogun.
The great Saigo was born Kagoshima Prefecture (which used to be called "Satsuma"), and is highly honored there! After knowing who he is...we can see why!
For those who are into history, don't worry, Kagoshima didn't leave you out!
There's plenty for you to enjoy there! 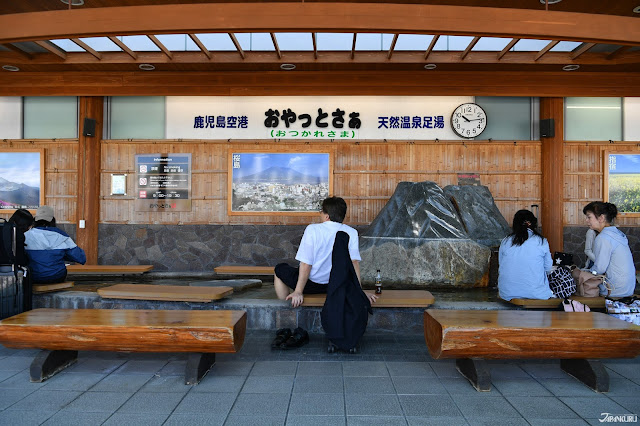 Before you start your adventure, or even at the end of it, how about a nice relaxing Japanese foot spa bath just outside Kagoshima Airport?!♨👣 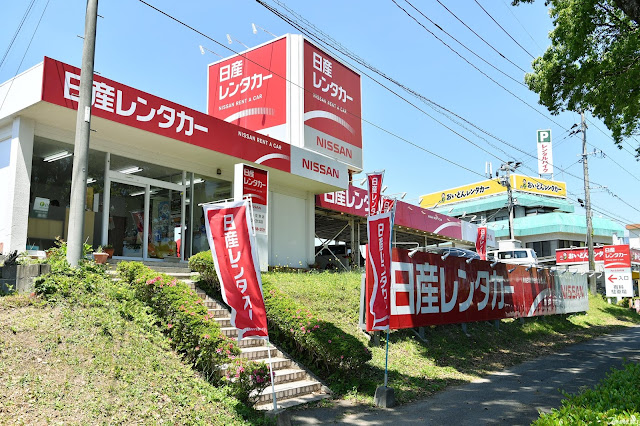 we rented a car from Nissan to get around, making things much easier!
If possible, we would recommend you doing the same. Things can go a lot smoother that way 🚘🚘 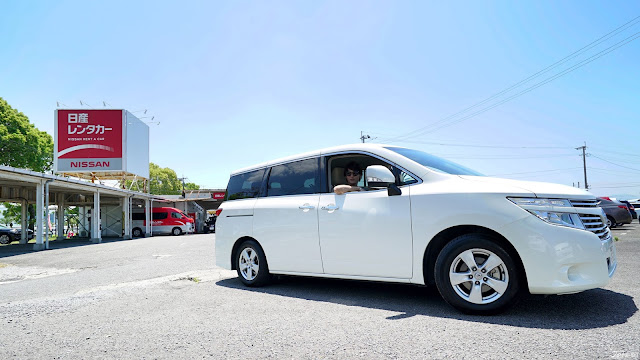 If you don't have an international drivers license, there is an official Kagoshima tourism website, and they have ALL KINDS of helpful information about getting around.
Here is a useful link (PDF) from their site explaining Kagoshima City's transportation in detail
Kagoshima City Transportation Guide (English)

It's not everyday you get to see an volcano...let alone one that's constantly active and smoking from the top!
This was the peak of culture shock here for us because the people of Kagoshima didn't see what the big deal was!
Sakurajima is their city's symbol, and the people live their lives in harmony with Sakurajima. After realizing that, it really became the charm of Kagoshima and its people. 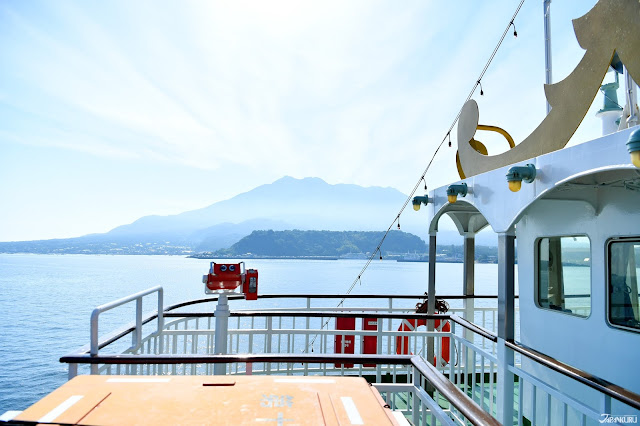 The port is a minute away from Suisokukan-mae (Sakurajima Sanbashi) by bus🚌, or a 5 min walk from stop Suizokukan-guchi on the tram🚋

If you rented a car, no worries!
Sukurajima Ferry has ferries that can transport cars!
Keep in mind though that there is a separate fare for transportation.
In the link below has all the information needed.

once you get to Sakurajima~~~ 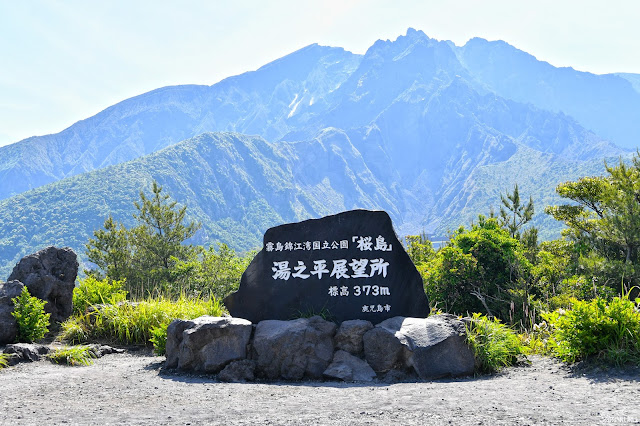 take a hike! Explore!
At this spot you get a 360° view of the whole mountain! 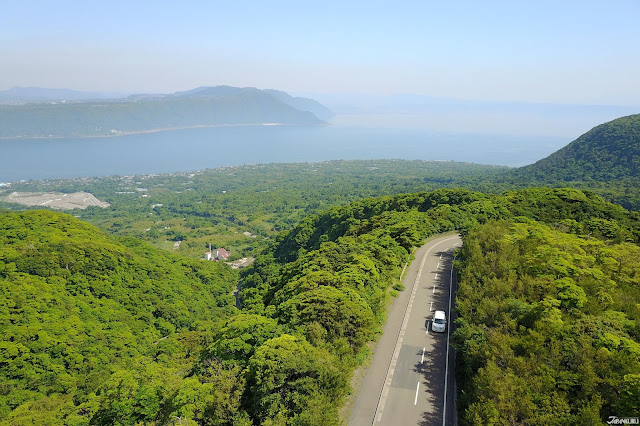 There is a souvenir shop near by that we went to
and found lots of special lil things!🍊🎁✨ 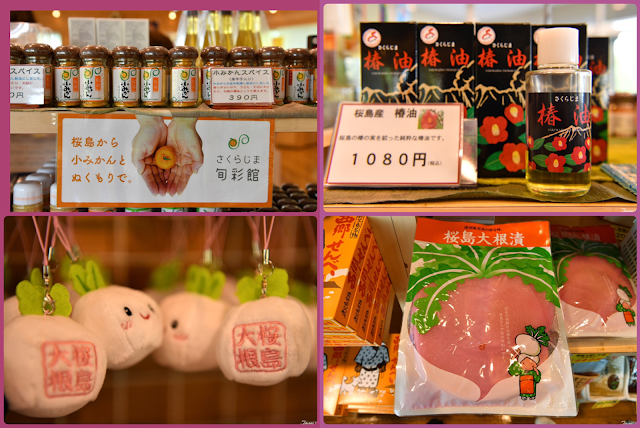 ➀At Sakurajima, they have the SMALLEST MANDERINE ORANGE IN THE WORLD!!!


②Kyushu is well known for Tsubaki, and it's Tsubaki Oil is said to have many benefits for the skin!


③Daikon, or Japanese radish, is also VERY famous in Kagoshima.
So of course they would have cute little plushies of it!


④Or go for the real thing and take some of Kagoshima's daikon home! 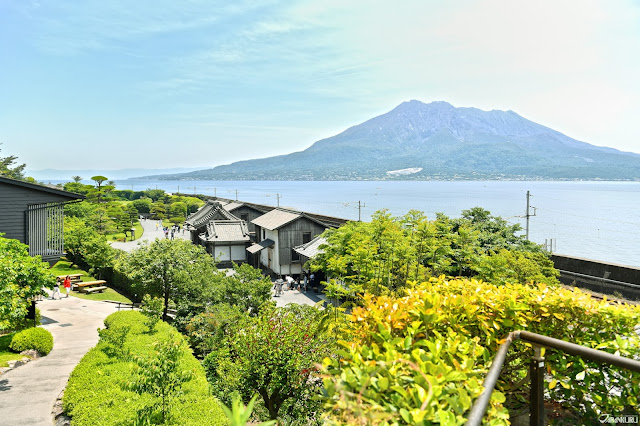 CNN voted this one of the world's best/most beautify areas IN THE WORLD! 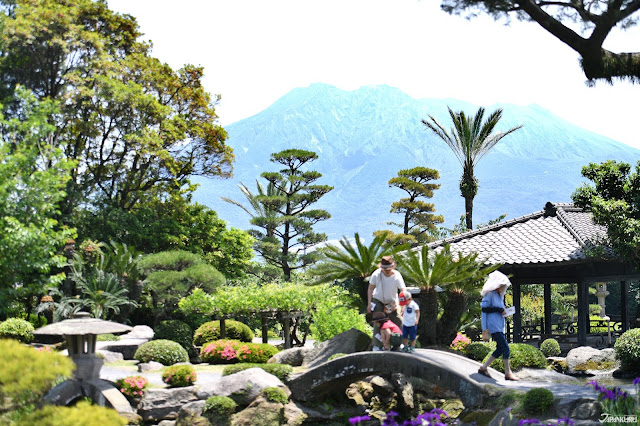 ✴It's obvious to see why✴ 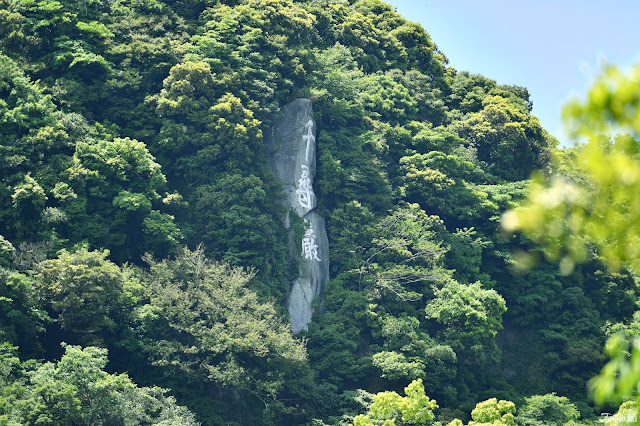 The three letters carved on the rock mean “very large rock”. In 1814, a total of 3,900 people worked for three months to complete this job.
What's interesting though is that carving letters on rocks was not common in Japan, so this action said to have strong Chinese influence 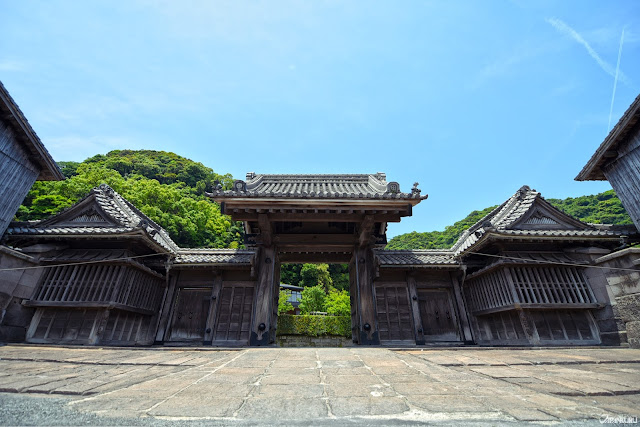 This is the main entrance gate and is about 150 years old.
Not only that, but this gate was used as a location in the filming of the NHK Taiga drama, Atsuhime, which relates to the history of the Satsuma domain at the end of the Edo Period. 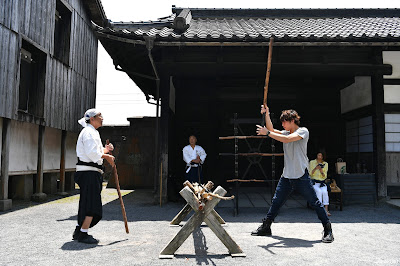 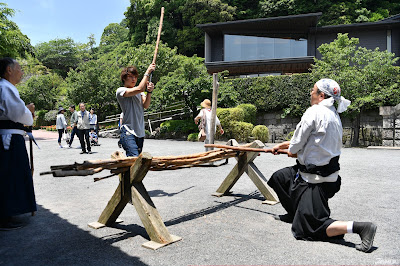 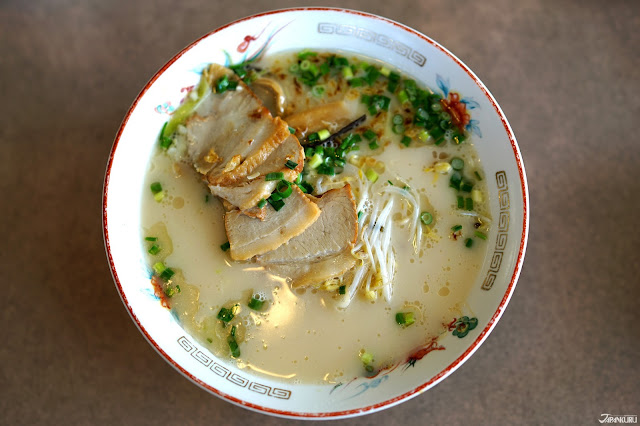 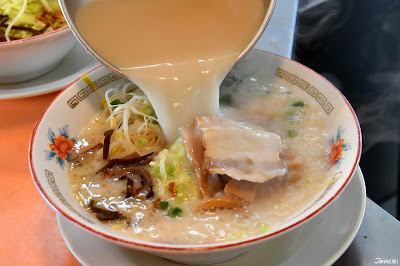 Kyushu is famous for it's pork base broth ramen,
but the broth at Zabon Ramen is made not pork bones,
but rather from the pigs head!🐷
Sounds a bit iffy, but man-oh-man, is it delicious! 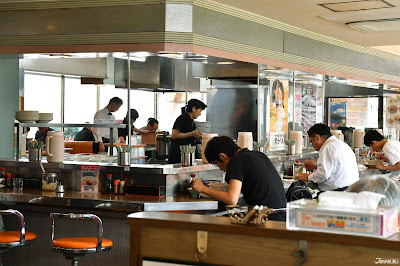 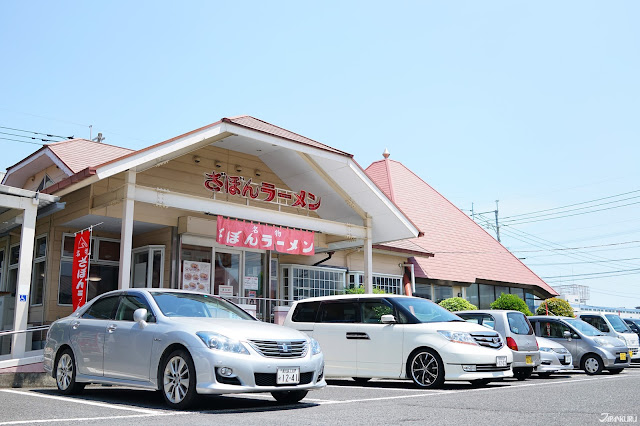 ✶✶✶✶
🏖= LET'S TAKE A BATH....IN THE SAND? =🌞
This "sunaburo/ Sunamushi onsen" (lit: sand bath) is the ONLY natural sand insected hot spring IN THE WORLD!!! 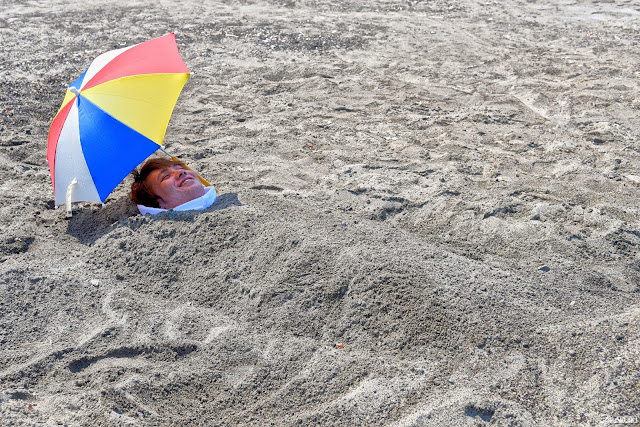 We know a lot of people like covering their friends/families in sand as a joke in the states...but doing it for health benefits?👄💪 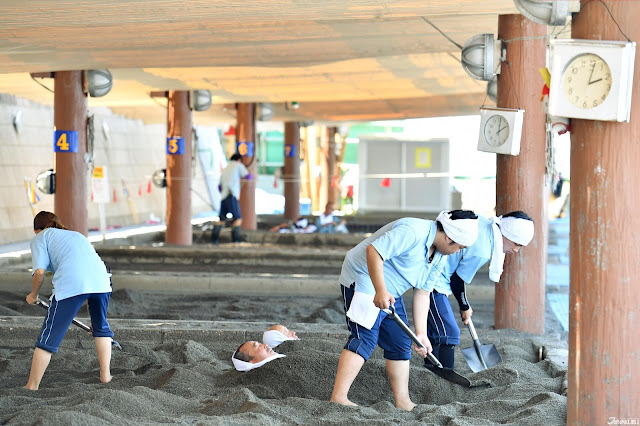 Japan has a lot of interesting ways to help your body get rid of its toxins, things maybe a lot of Westerners wouldn't think of haha
It's quite interesting though!
Below is a link explaining what becoming a sand casserole can do for your body
* Sand Bath Beauty Effects *

✶✶✶✶
🍨= COOL DOWN WITH A POLAR BEAR=🐻 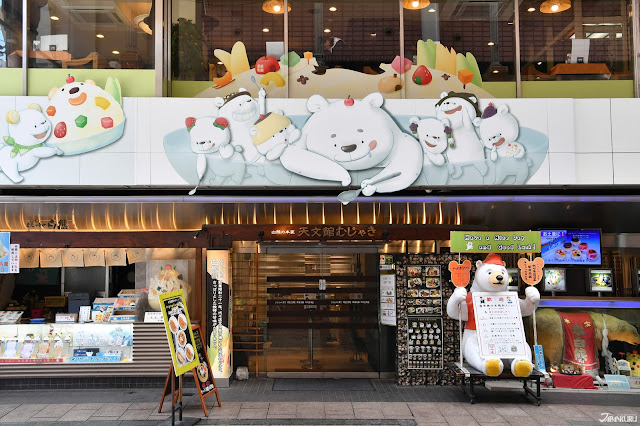 "Kakigori" is a type of shaved ice served as a dessert here in Japan. The shaved ice is topped/mixed with condensed milk, small colorful mochi, fruits, and sweet bean paste (usually Azuki red bean). As for fruits, mandarin orange, cherry, pineapple, etc.
Although here in Japanese, take a cool at the pictures of the ice that's available!!!
* Polar Bear Ice Here! * 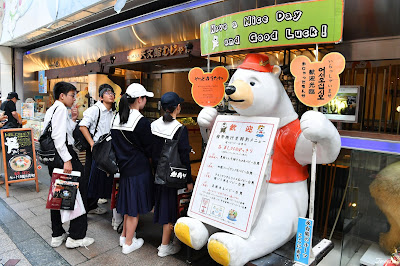 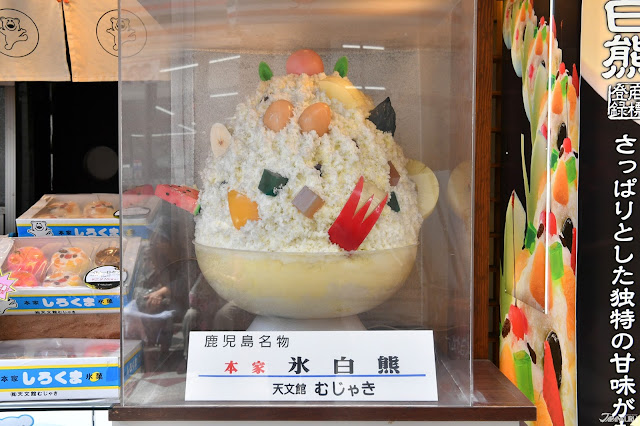 You can even enjoy a caffè latte with Shirokuma
or have some gum that looks like their shaved ice!
...yes...that's GUM❕❕ 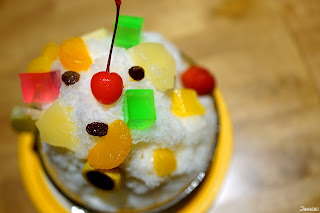 It's basically the glorified version of an ice cone🍊🍧🍍 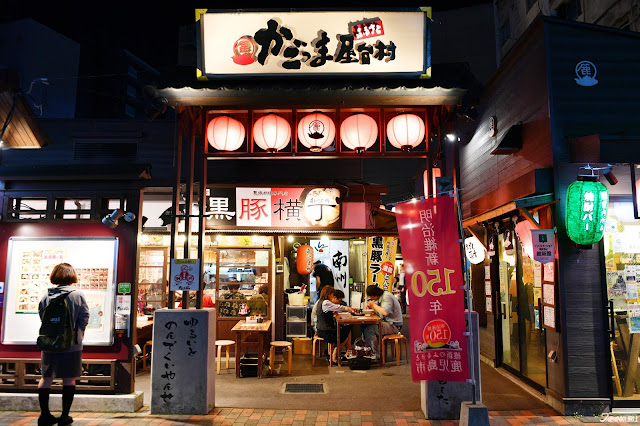 There are dozen of shops (around 25) to both entertain you while you eat their delicious food!
If you go to Asia, you can see these night street strips in many places.
However, what's is special about Kagoshima Yataimura is that everything is so small and close together, but with that brings everyone closer in more than just physically speaking! 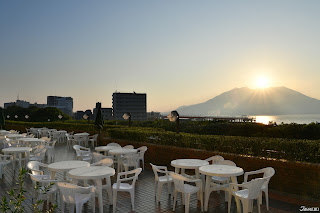 Where else but the
Best Western Rembrandt Hotel Kagoshima Resort?!
You'll get the PERFECT! view of Sakurajima🌸🏔
**link about the hotel here**