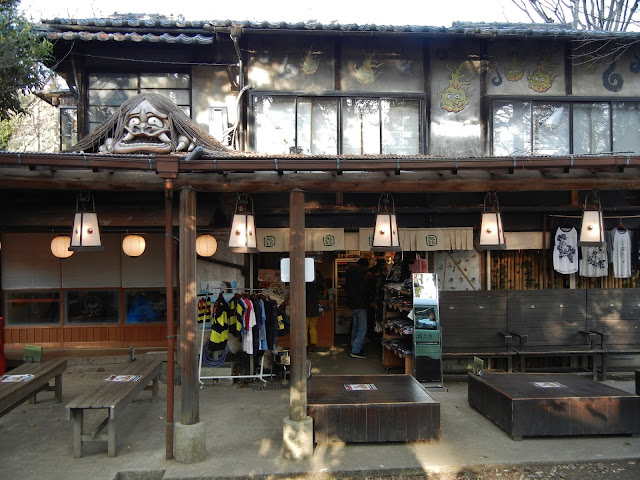 
There might be a few questions for some like,
"what's Gegege no Kitaro?", or "what's yokai?"
Well! Hopefully we can explain them both all at once!

Gegege no Kitaro is a manga series created in 1960
by a lovely writer/manga artist, Shiger Mizuki. 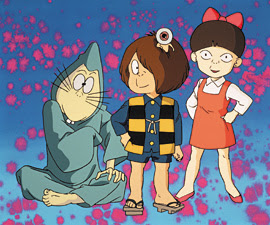 Each story has a different story line,
but it's about a boy (who is a yokai) name Kitaro
that just wants humans and yokai to live together peacefully.
Kitaro only has one eye, because when he was born
both his mother and father were dead.
His father felt bad for poor baby Kitaro,
so came back as Kitaro's eye - becoming Medama Oyaji! 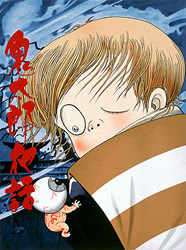 As we said before, each story line is different,
but all involve Japanese spirits, creatures, mythological,
folk tale creatures, i.e. yokai!
Like one of Kitaro's good friends Ittan Momen,
who is a white cloth looking yokai that flies around.
He is much nicer in Gegege no Kitaro,
but the myth around the original Ittan Momen
is that it would wrap itself around the faces of humans
in attempt to smother them. 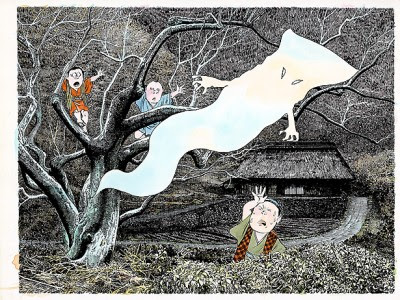 It became so popular it eventually was made into an anime series
as well as live action movies and video games!
Many adults in Japan know Gegege no Kitaro in some way or another!

Make sense?
We hope so!

Shigeru Mizuki is originally from Tottori prefecture,
but lived in Chofu, Tokyo for sometime before his death.
Which is why at Jindaiji, there is a Gegege no Kitaro themed cafe!!!
We love Gegege no Kitaro and ANYTHING yokai,
so we wanted to go take a look.
Since the first time,
we've gone back multiple times👻💗 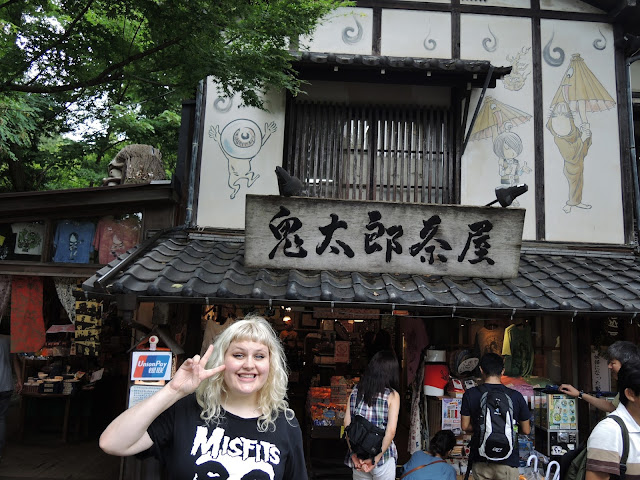 You can see lots of goods to buy from outside.
We wanted to buy EV.ERY.THING!!!!!! 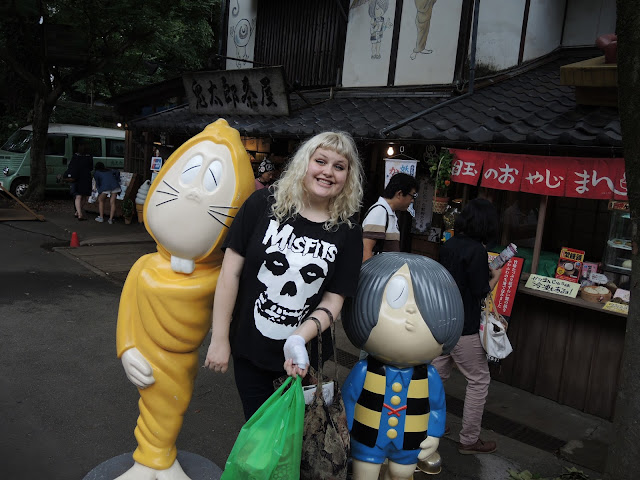 ✹There are so many places to take great and fun photos✹ 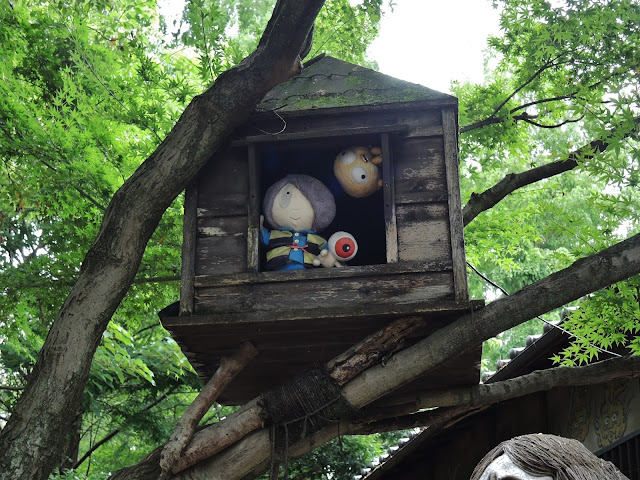 It's like we jumped into Shigeru Mizuki's world!!!!!!
We never wanted to leave💗 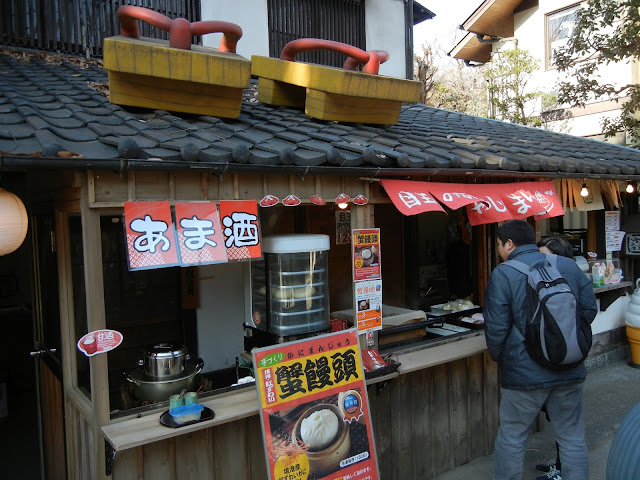 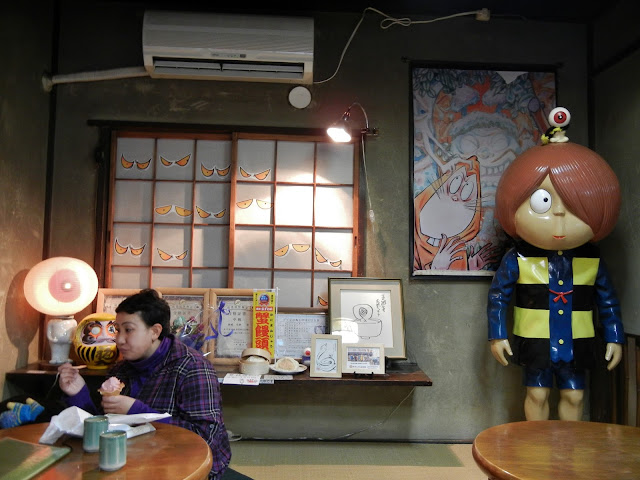 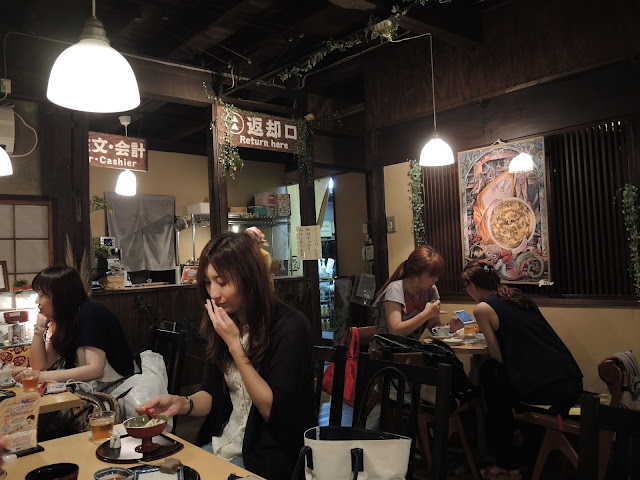 ↟↟Now it's like this!!↟↟
They set up tables now so more people can come and enjoy! 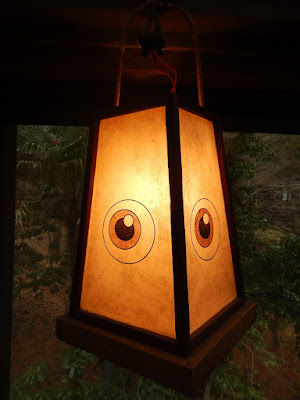 They still have Kitaro decorations everywhere though!
Which is the MOST important!
Like a Medama Oyaji lantern
and Nurikabe bench!!! 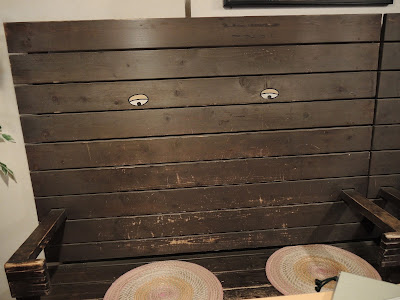 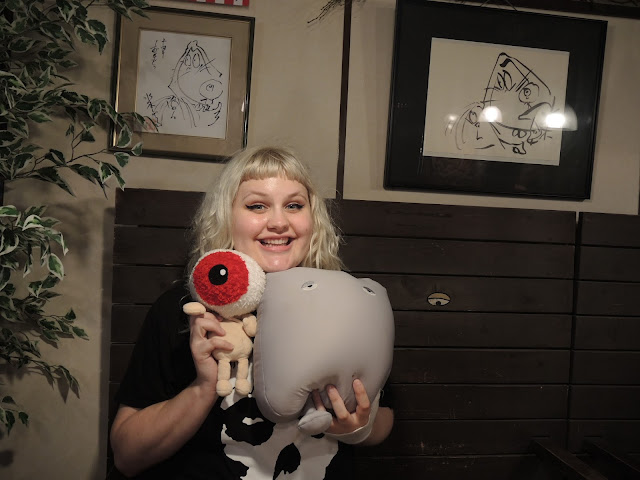 There are lots snacks that have Gegege no Kitaro characters on them!

EVEN NEZUMI OTOKO AND MEDAMA OYAJI CAFE LATTES!
Kitaro is also available,
but we got our favorite characters!
Love that Medama Oyaji is taking a bath
in his miso soup bowl💖🖤💖🖤💖🖤 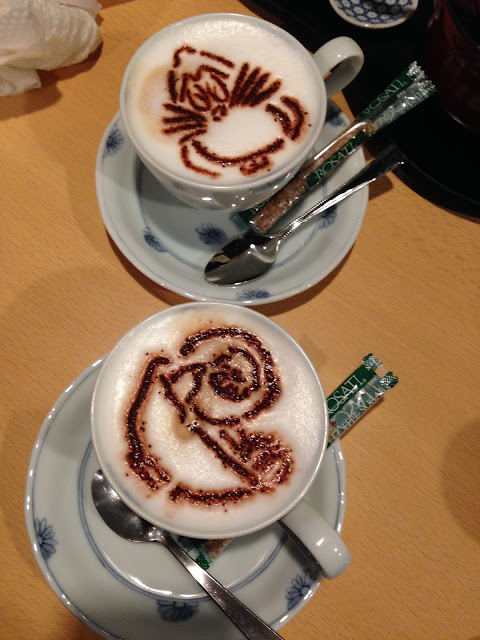 How about a cup? 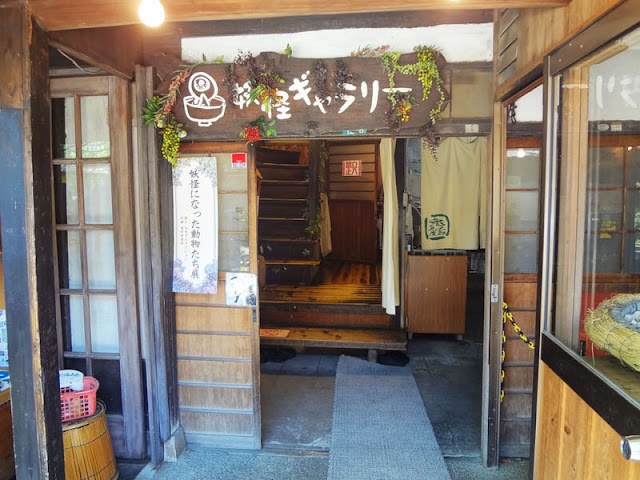 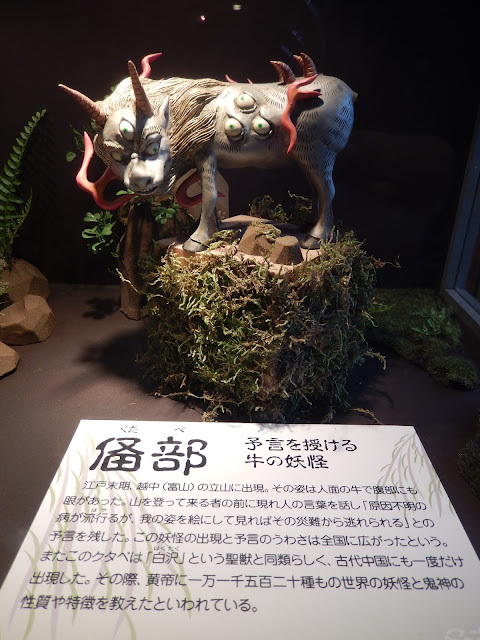 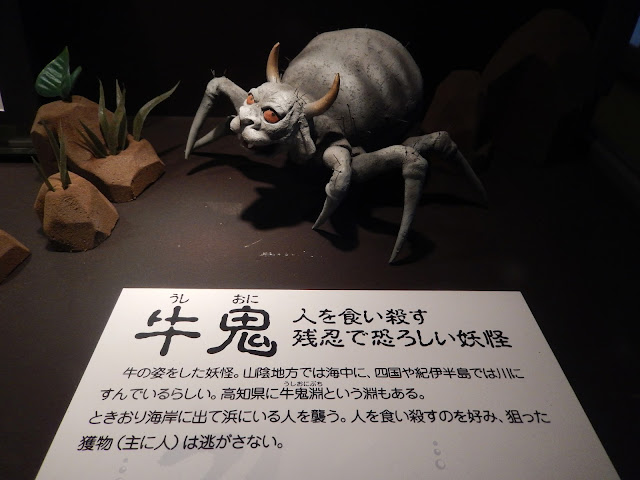 We really liked that at some of the displays
they incorporated the figures with Shigeru Mizuki's drawings of those traditional yokai in the back.
It was like you were looking at more than just pop culture.
You were also getting a sense of Japanese history and culture. 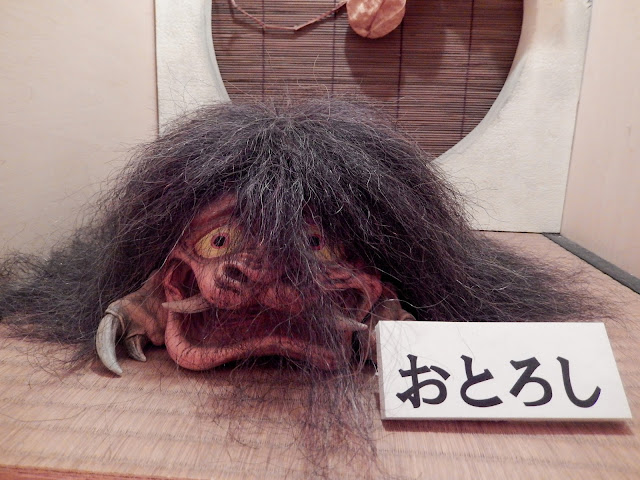 Otoroshi are a sort of guardian of holy places
(shrines and temples).
They only attack humans if they defy or disrespect the grounds. 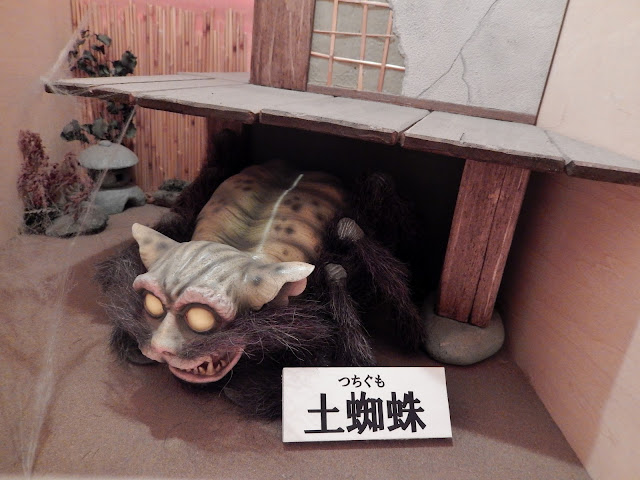 Tsuchigumo, a Japanese folklore creature
that has the head of a demon (though it looks like a cat),
body of a tiger, and the legs of a spider. 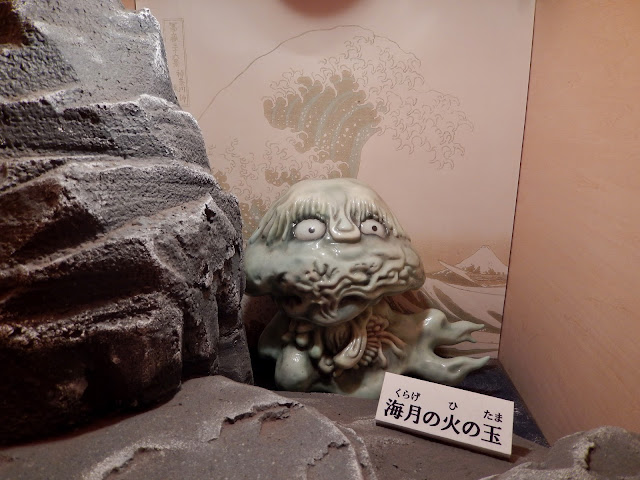 A cute little jellyfish, Kurage no Hi no Tama 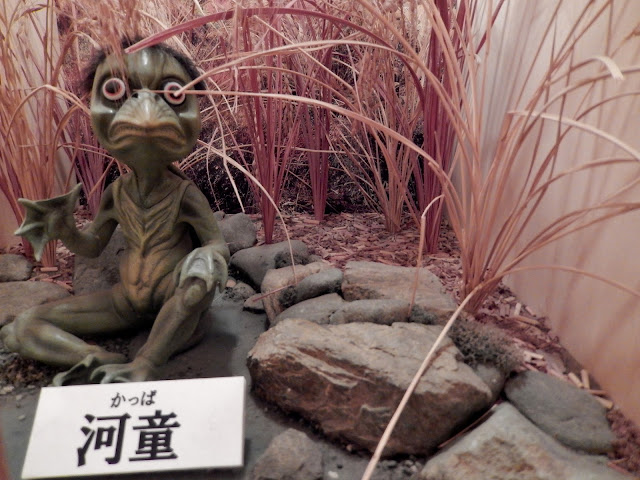 Probably the most well known yokai, Kappa!
They live in rivers, lakes, ponds, etc. and
have a little dish on their head that has to stay wet,
or they die. 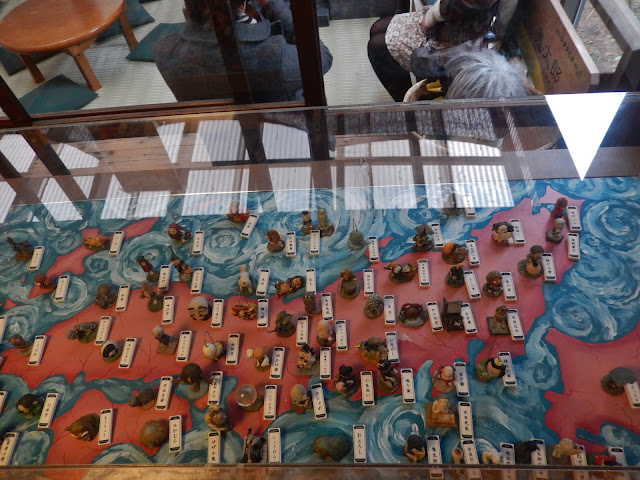 This was a really neat and fun display!

It had a bunch of Kitaro yokai figurines with their names
on top of the area in Japan they came from!

and of course, what would a yokai gallery be
without learning a bit of info about Shigeru Mizuki. 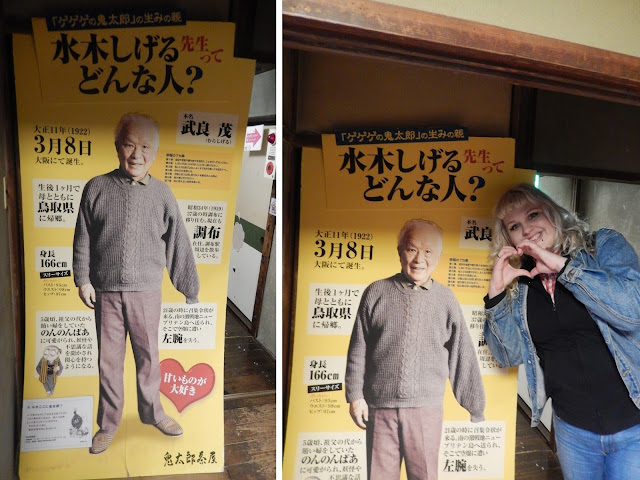 He's so cute!!
By the way, he lost his left arm in the war.
So all of his work was done one handed.


Lately there are shows coming out about Japanese yokai,
such as Yokai Watch.
It's a cute show, don't get us wrong.
But one of the MAIN THINGS that sets Shigeru Mizuki's
Gegege no Kitaro apart from Yokai Watch
is that all of the yokai are taken from actual Japanese myths.
Yokai Watch, while does include some Japanese yokai
such as Nurikabe, the yokai are created for that show.
They don't have the same long history or stories
as the yokai in Gegege no Kitaro.
Once you know a bit about Japanese yokai,
you of course learn more about Japan and their values,
but it also allows you to connect with some of their social meanings.
For example, if you love cucumber,
it's likely a Japanese person will call you a Kappa.
Since apparently Kappa love cucumber.
Or someone who is stuck up,
they're like a tengu
because of their large nose that points up to the sky.
It's really interesting and fun once you learn those things!!

The Kitaro Teahouse is perfect for just about everyone.
Kids, anime or manga lovers, history buffs,
people wanting to learn more about old Japanese culture,
or even those who just want to check out someplace new!
We guarantee you'll have a terrifyingly great time! 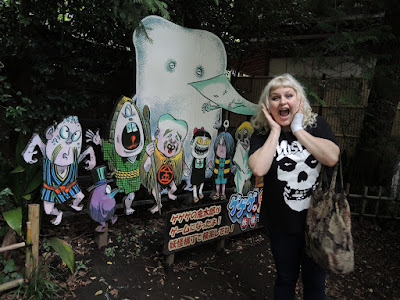 ☕ *Travel to Okinawa and Enjoy the Seaside View at this Cafe* ☕