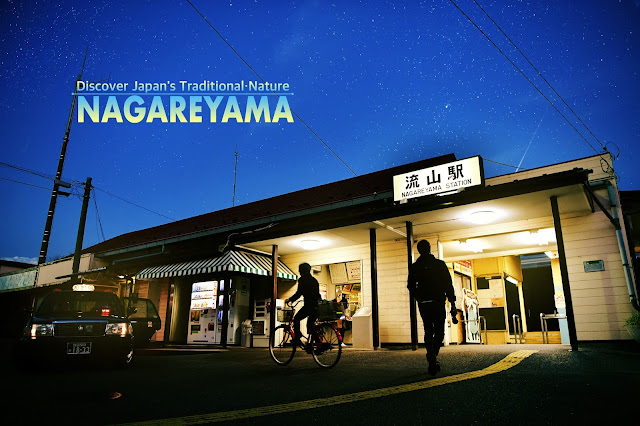 Go to a Japanese sake distillery, learn about the Japanese cooking condiment mirin, see an intown only exhibit at the Kikkoman Corporation, and more!
A great place to visit just outside of Tokyo!
~Nagareyamashi~

Another Attraction of Japan

Recently we went to a small local town that's close to Tokyo.
That place is called Nagareyama and it's located in Japan's Chiba Prefecture.
Nagareyama City, a city with a population of about 180,000,
is a popular residential area (because the rent is so cheap!)
with convenient transportation that can take you to Tokyo in about 20 minutes.

In Nagareyama there is Tone Canal which
leads to the center of Tokyo's Edogawa,
and its original purpose was for carrying goods by ship quickly and safely to Tokyo around the 1890's.
So just on that information alone,
you can expect there is a lot of unknown history and things to do here.

Which is whhhhhhhy,
we decided to write about it and share with you all!!

ONLY 20 MINS FROM TOKYO! 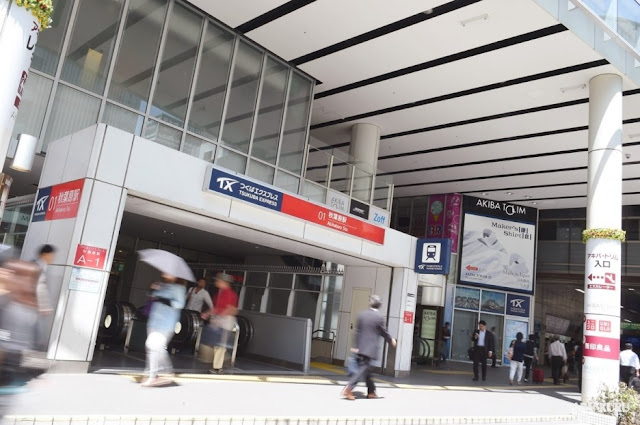 Nagareyama City is really simple to get to.
It being so close to Tokyo is an added bonus!
There are two main ways to get there though:

The fastest and easiest way of getting there
is by the Tsukuba Express (つくばエクスプレス).

Tsukuba Express is a subway passing through popular sightseeing spots
in Tokyo such as Asakusa and Akihabara. 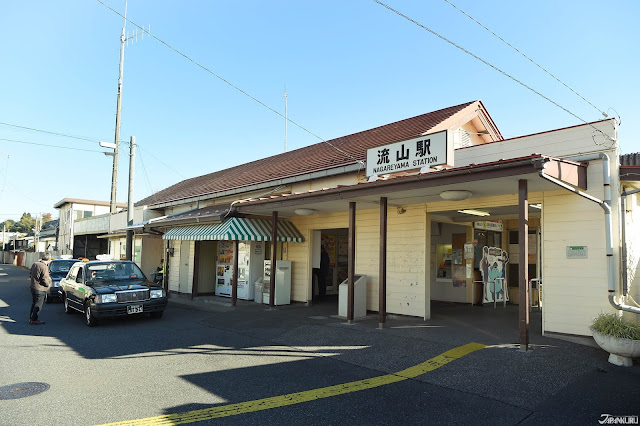 It takes a little more time than the Tsukuba Express,
but you can also get there by taking Nagareyama's local train, "Ryutetsu".

The Ryutetsu is a local railway line only 3.5 miles (5.7km) long,
and it's a great way to see countryside train stations that. 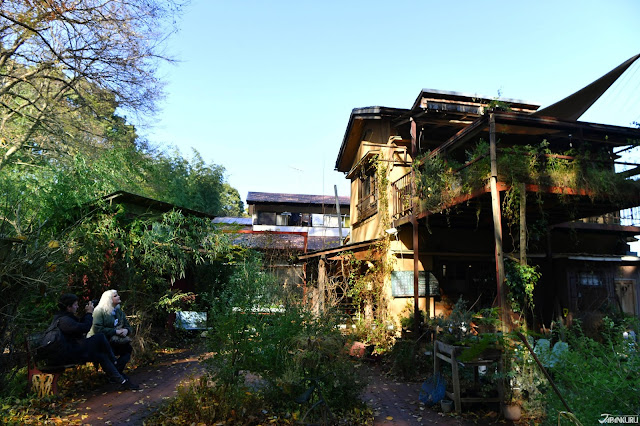 A majority of the area in Nagareyama is covered with trees and other greenery
and neat little cafes are hidden all over.

Cafe Oniwa, for example,
is the representative cafe and restaurant of Nagareyama.

Cafe Oniwa is pretty hidden,
but it has a lot of character and unlike any cafe or restaurant
that we've been to in Japan yet.
There are a lot of cafes and shops in Nagareyama that have renewed buildings because the city subsidizes them all.

It is said that about 7 shops and cafés have been created as a subsidy system to prevent some of the depressing phenomena that historic buildings disappear.
That is something you don't see in Tokyo.

In terms of nature-friendly concepts,
the food was all healthy dishes made with only vegetables and greens.
We both got on of each on their lunch menu,
the salsa keema curry and donabe rice set.
Both were really good,
but more of us liked the donabe rice set more.
If you get a chance you should totally try it!

We saw in their case these yummy caramel banana nut muffins,
so we got one for our sweet tooth.
It was SO good!
A lot of muffins taste like they used pancake mix,
but the muffins here were legit muffins!!!
To make things even better,
it comes with handmade cream cheese frosting.
We could really eat just this muffin all day.
The highlight of the restaurant by far.

Another small and hidden cafe, tronc, is in the residential area of Nagareyama.

This 100-year-old building has been newly renovated
and has the atmosphere of an old house.

Nagareyama is famous for the Japanese cooking condiment mirin,
and this cafe's #1 recommended menu
is toast and mirin butter.
We didn't know what to really expect with mirin butter,
but it added a subtle sweetness. 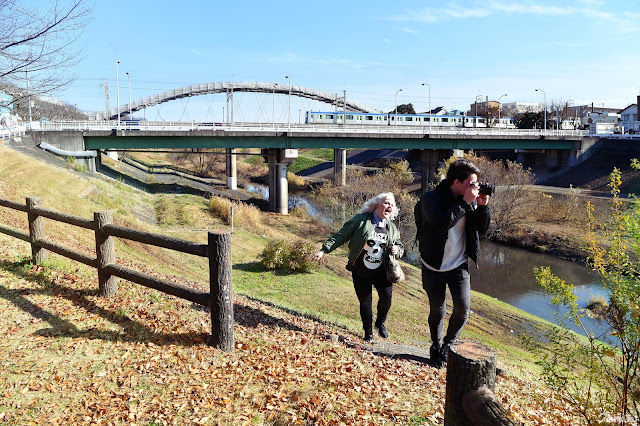 Walking through Tone Canal
you go through a place that was made to into a "Dutch area".
We weren't sure why or how exactly it was meant to be a Dutch park,
but the Tone Canal is a beautiful place regardless.
Lots of beautiful trees, hills, and pathways,
it's a super relaxing and calming place. 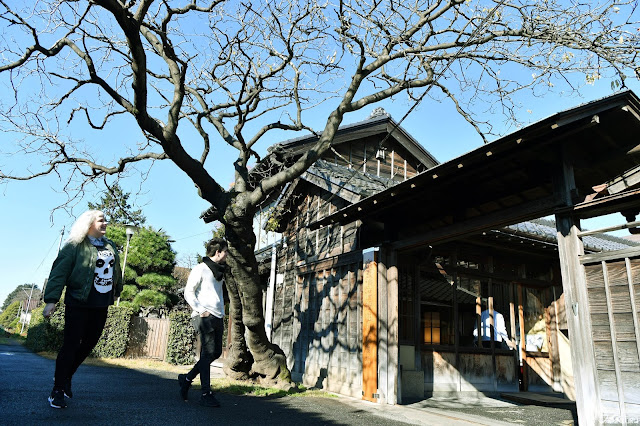 Nagareyama is connected to Edogawa River across Tokyo
and used to be used as a way of commerce.
So Kubota Miso Soy Sauce,
a factory to make miso and soy sauce,
started in 1925.

The building itself is beautiful and looks so old,
but go inside and you'll see a space provided
the raw materials of soy sauce and miso,
as well as some of the "only in Nagareyama" condiments
that contains these special materials.

FOR SOY SAUCE
・On the right is daizu (soybeans) and the left is kouji,
something that assists the fermentation process.
Apparently kouji is often used in top skincare products.

FOR MISO
・From right to left is daizu (soybeans), wheat, then a mix of the two. 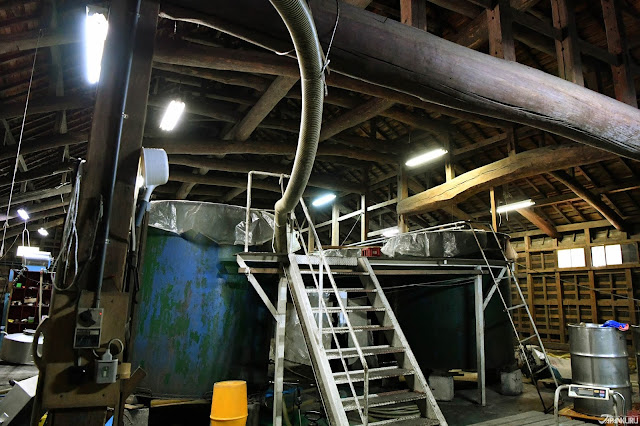 Head next door and you'll see the Kubota Foundry which is a Japanese sake manufacturing factory that was founded in 1872.
We didn't know this before but Chiba has a pretty long history of sake,
particularly the nihonshu (sake) Katsuka (勝鹿),
which was made here and is well known throughout the country.
Sake became a big part of Chiba history primarily due to
the high quality of water transport through the canal,
it started around Japan's Kanei era (1624-1643) with there only being one distillery,
eventually growing into the many.

If you apply in advance,
you will be able to observe the site
where you make the nihonshu (Japanese sake).

After the tour,
you can taste various sake and mirin
with different manufacturing dates and methods.
What surprised us the most was the mirin!
We couldn't believe how sweet natural, pure mirin was! 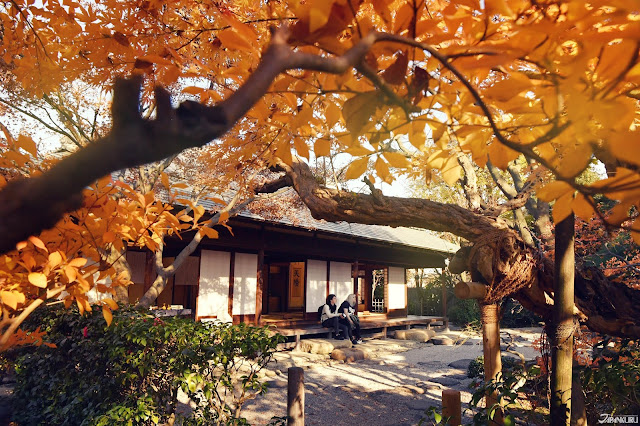 The "Issa Soju Memorial Hall" is where the poet "Kobayashi Ichiza",a representative of the Edo era, spent an era.It is said to be preserved as a historic site and a place where citizens can relax.

Although it is a historical site, you can go inside the building and have a cup of tea
while gazing at a small yet well-kept Japanese garden. 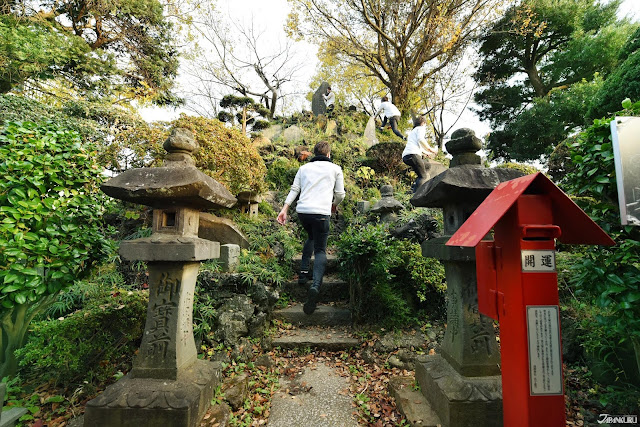 "Fujizuka" is an artificial sculpture built in the Sengen Shrine,
which is registered as a tangible tangible cultural property.

This sculpture, which is about 6 meters high,
looks like a well-built stone tower at first glance,
but it is a meaningful sculpture made by moving the lava rock of Mt. 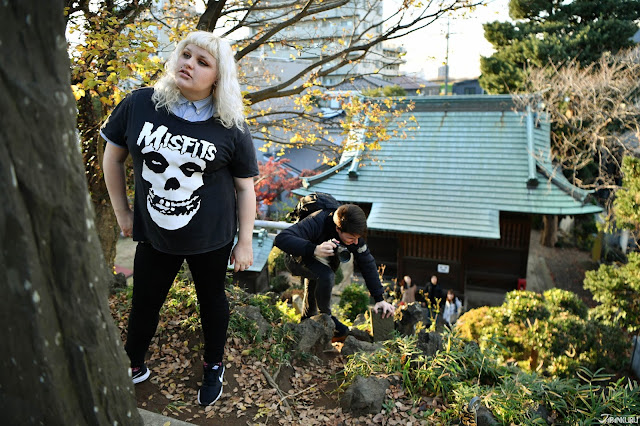 It is said to be "Fujiasamadaijin" on a stone about two meters in height,
which stands on the top of a hill,
which means that this hill symbolizes Mount Fuji.

Manjo "Shiromirin" (clear mirin), the specialty of Nagareyama city
marked its 200th anniversary in 2014.
Taking this opportunity,
Nagareyama Honcho Machinaka Museum was set up to exhibit
the historical material on Shiromirin on the walls of Kikkoman Corporation
in Nagareyama which inherits the flavor of original "Manjo,"
one of the two big brands of Shiromirin in Nagareyama.
This museum exhibits the rare items
such as the oldest mirin label in existence in Nagareyama,
the old posters of "Appare" of the Akimotos
and Manjo of the Horikiris which led the mirin industry, etc.
The museum aims to attract many visitors to Nagareyama,
and to promote the vitalization and
tourism in Nagareyama Honcho as a new tourist spot of an outdoor intown museum. 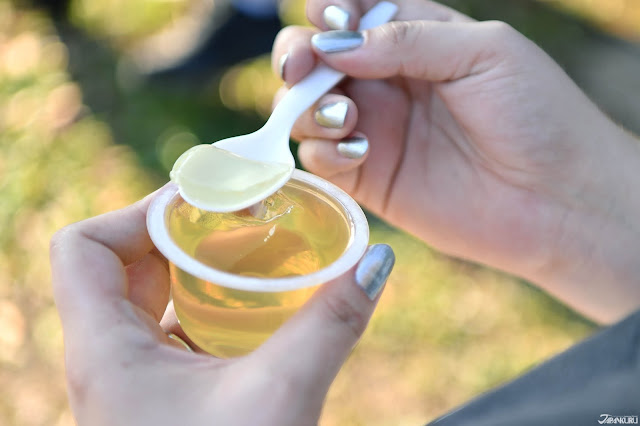 A special product representing the city of Nagareyama,
"Mirin Jelly" (jello made out of mirin),
can be bought at a store in Nagareyama City, Kagoyara!

The taste of this mirin jello almost had an apple flavor to it,
it wasn't what we were expecting at all. 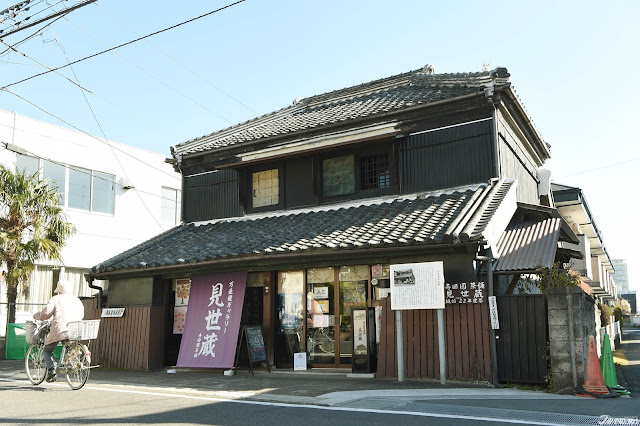 🔮★Misegura is a kaleidoscope shop★🔮For reference,
kaleidoscope refers to a device that allows you to look at a unique pattern byreflecting several glasses in a long cylinder.

Although kaleidoscopes are a little unfamiliar to some cultures,
they're easy to use.
Apparently,
there are even world conferences that value the view
and designs one sees when they use it. 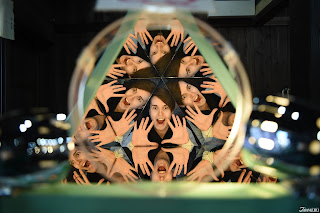 We never thought there would be a place
where you can see SO many kaleidoscopes all in one spot.
There are a lot of kinds of kaleidoscopes ranging in shapes and colors,
you are sure to have a good time here.

⏰: 10am~5pm (every Mon & Tues closed)
📞: 04-7190-5100
🖳Kaleidoscope Misegura official website (JPN)
- Nagareyama sightseeing guide application page (English)
→ There is a facility for those that want to experience in Nagareyama. If you don't understand Japanese, you can apply for a free English guide by using the above page.

The store Sasaya is a bedding shop with a history of about 155 years.
Many Japanese still sleep on futons, a cotton pad mattress on the floor, but once it wears and tears or loses its padding, they just throw it away. But by coming here you can save your bedding,
save your money (because it's cheaper obviously),
and save the hassle of figuring out the proper way of throwing out bedding.

You can even make Japanese bedding for your favorite dolls and/or stuffed animals!! 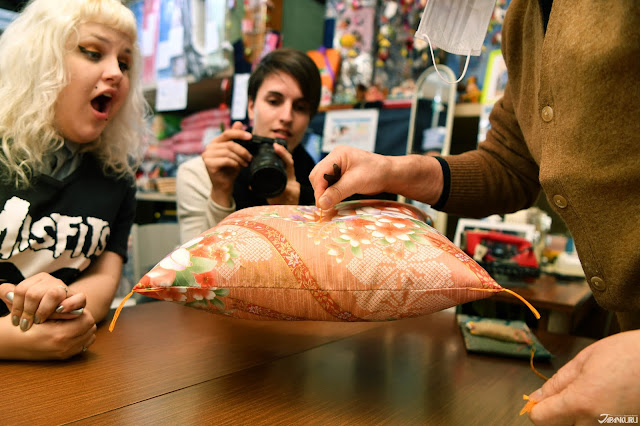 One may not think that this place would be very popular,
but in fact, it's pretty well known for Japanese futon, pillow, and blanket repairs. 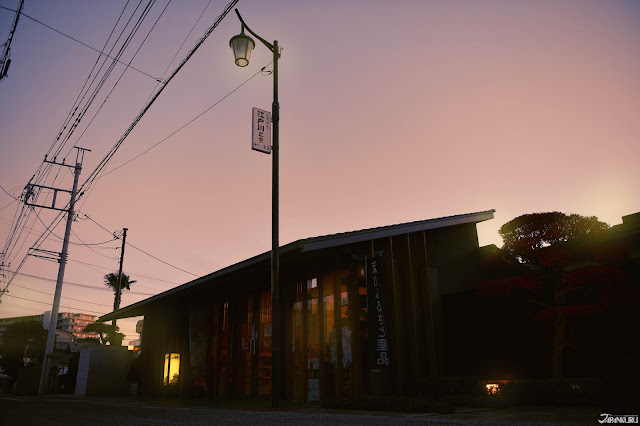 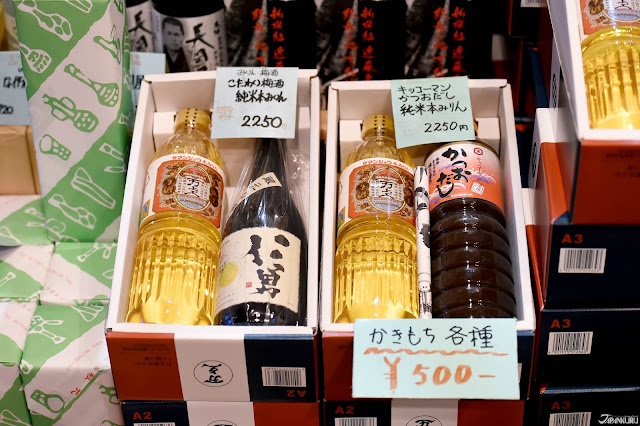 Here you will find not only the "sweet rice cake" (mirin) of Nagareyama,
but also sake, sweets, and other souvenirs. 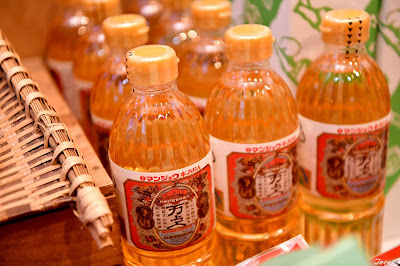