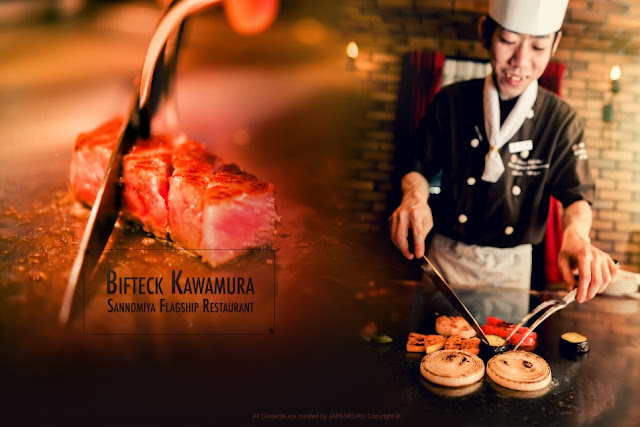 What's the one thing most people want to try when they come to Japan? 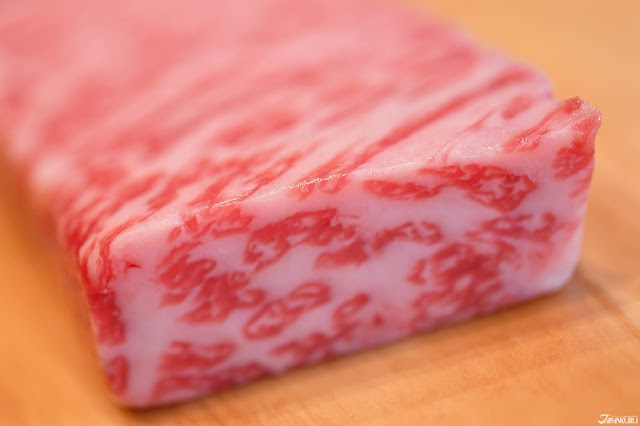 Recently we saw on TV a countdown of the most foreign toursits'
most popular things to eat in Japan.
Ramen taking the gold for being number one (no surprise),
and of course, sushi and tonkatsu being in the top 10.
Something we didn't expect to be so high up there was Kobe beef!
Kobe beef is of course delicious,
but it was interesting to hear how so many foreign tourists eat it
when there are so many Japanese people that never have.
So since we found out how desirable Kobe beef is,
we decided to stop by one of Kobe's most popular
Kobe beef specialty restaurants
to see HOW good Kobe beef really is.

"Welcome to the World of Kobe Beef"
Bifteck Kawamura 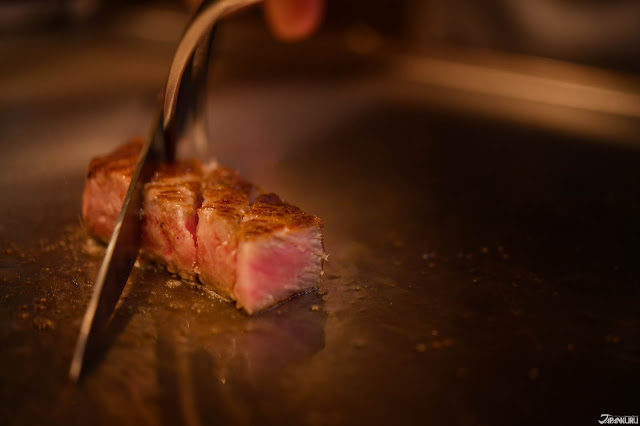 Back in 1868 Kobe beef became a part of international trade,
and from there it was viewed as traditional Japanese food
despite Japanese people not being accustomed to eating red meat.

As a non-Japanese,
we don't know what it means to be Kobe beef.
What qualifies beef as Kobe beef,
and what makes it so special?!?
So while eating some yummy teppanyaki Kobe beef
we asked about the story behind it all. 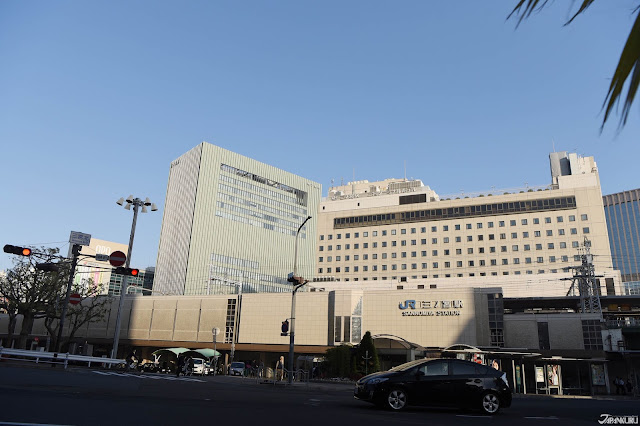 Around Sannomiya Station is known as the shopping district of the Kobe area,
so you're sure to see lots of stores and restaurants lined up. 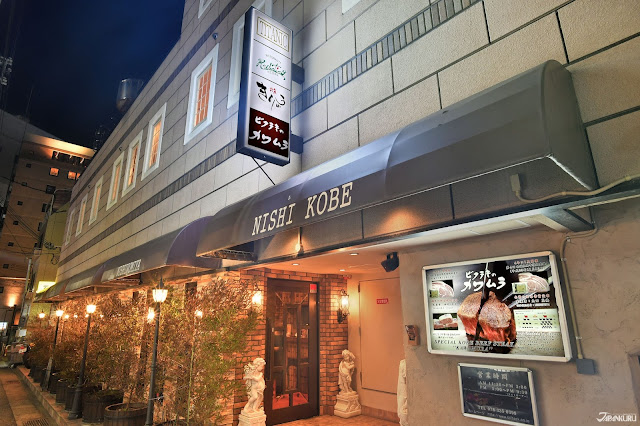 The restaurant we decided to go to was Bifteck Kawamura,
which is about a 2 minute walk from the North Exit of Sannomiya Station.

Different from the Teppanyaki You See at Home
Teppanyaki Kobe Beef 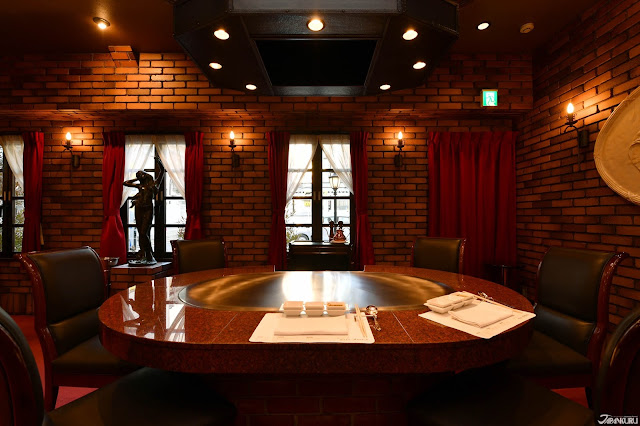 Teppanyaki restaurants are all over the world,
but their main popularity besides the delicious food
is the exciting show that is put on infront of you.

The same idea applies here,
however it is seen less as a show and more as an art.
Everything is so high class and beautifully set up
that you almost get the feeling instantly that the chefs here
take Kobe beef and cooking it seriously.

Why Kawamura?
Known for Using the Highest Grade
of Kobe Beef 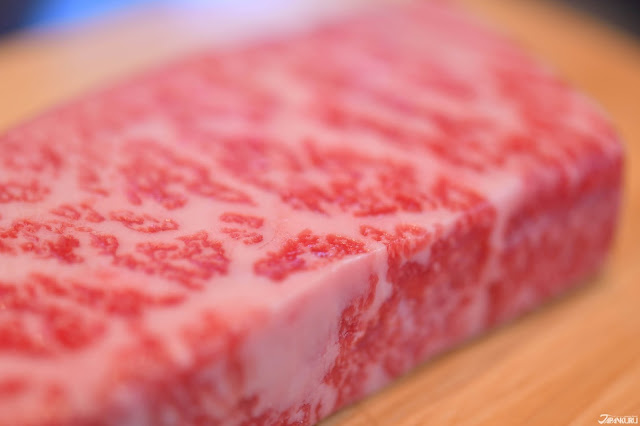 The qualifications of being Kobe beef is surprisingly high.
It all starts with tajima-gyu,
or Japanese black cows
which is one of the four Japanese breeds known as wagyu.
From there the raising process requires a lot of attention
to create a stress-free, relaxing environment.
Then the grading of the cow depends on the yield and meat quality scores,
but only cows having a marbling index of No.6 or higher,
passed weight limitation, has a fine meat texture,
and a few other criteria are officially certified as Kobe beef.

◉Yield score:
3 grades depending on the amount or percentage of edible cuts
that can be gained from a single head of cattle

*It is also said that females are the most delicious,
so they are the ones most desired.

There are only a few hundred winning numbers of Kobe beef cows a year.
For example, there was once only around 425.
So you can imagine how expensive a single cow would be!
Among that bunch,
Kawamura bought 148 of them,
making it a purchase that stands out
in the Kobe beef specialty stores nationwide.

Characteristics of Kobe Beef
"Melts in Your Mouth"
Doesn't Do Enough Justice! 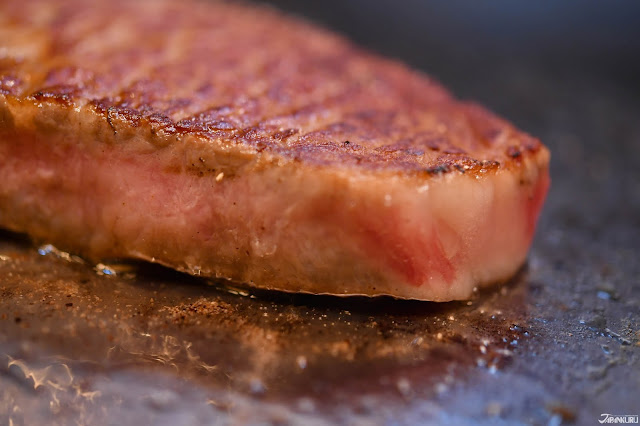 Cows are generally lower in muscle content,
but what makes Kobe beef different from Western or even Japanese cattle
is the high degree of fat marbling,
also known as "shimofuri" in Japanese.
Normally when you eat fatty meat,
you get this constant chewing of thick fatty tissue.
However, when we tried our first bite of Kobe beef,
the marbling of the fat literally melted in your mouth as if it were butter.
The chef explained that the fatty content in the meat
melts at low temperatures bringing out its natural
oleic acids to work well with the lean meat.
Apparently, Kawamura purchases a whole cow compared to other restaurants
where you only get certain portions of the meat verses as every delicious part.


Kobe Beef in Different Forms
Supporting Menu
We were impressed to see that Kawamura doesn't just serve Kobe beef teppanyaki,
but a course menu of Kobe beef served in different ways.
Really showing off the idea that they are Kobe beef specialists.

This trip we ordered the course menu that was said to be the best course
to enjoy Kobe beef dishes evenly,
Special Japanese Black Cattle Beef Steak Course.

Before the chef grilled the steak,
we got a special Japanese black beef roast beef,
oxtail soup, and a delicious salad with their own original dressing
(a mixture of acidic apple sauce and specialized mayonnaise).

Kobe Beef Teppanyaki
Garlic and Veggies
When you are finished eating the appetizers,
the chef adds oil to the iron plate grill and begins with the garlic.
NEVER in our lives have we seen garlic grilled with SUCH care!
Even if you aren't a fan of garlic it's fun to watch. 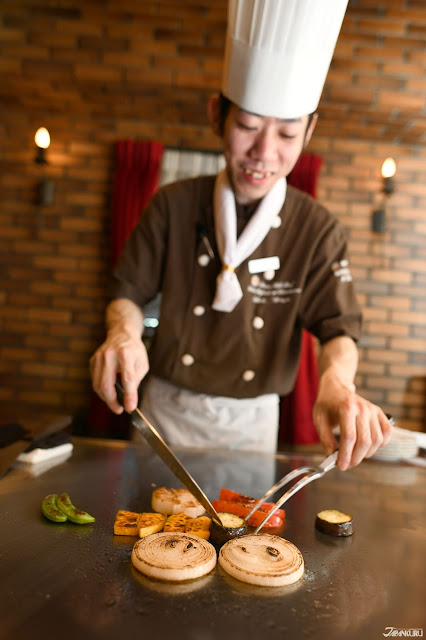 From there he moved on to the onions (from Awaji Island in Hyogo),
eggplant, squash, red peppers, beans (pretty sure lima?), and yams. 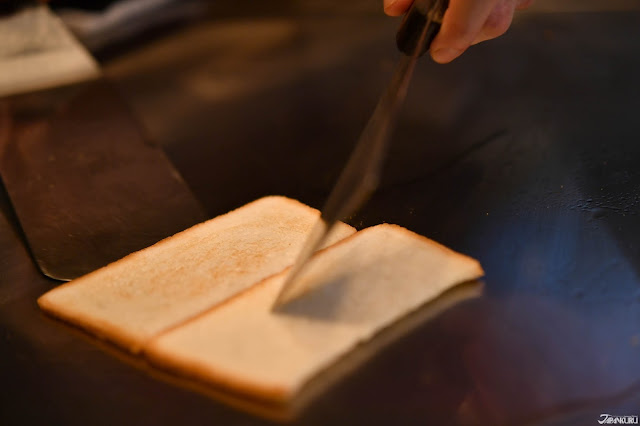 Next were slices of bread which really confused us.
So first it's best to mention that there are no plates,
once everything is finished being grilled,
the chef puts everything on a sheet of aluminum foil
on top of the grill in front of you
(there's a picture below where you'll see what we mean).

It was explained to us that if you place meat on the bread,
it is said that the meat won't burn or cool down while you eat it.
Some people eat bread though because it's like toast
and has some of the juices of the steak. 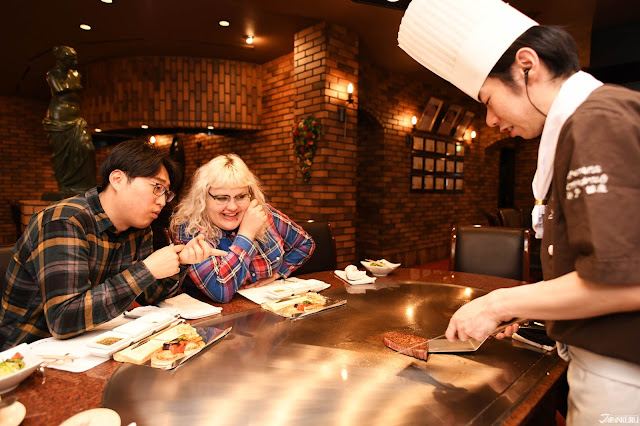 NEXT UP IS THE KOBE BEEF!!! 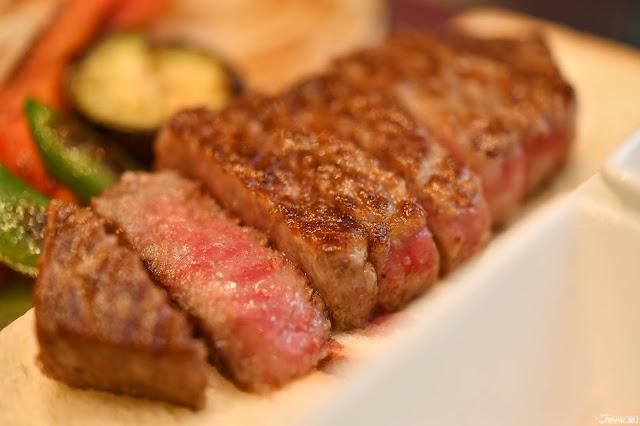 The rare steak was cooked on the outside so that juices wouldn't escape.
Of course, you can have it grilled to your liking,
but the chefs recommended medium rare for the best flavor and texture. 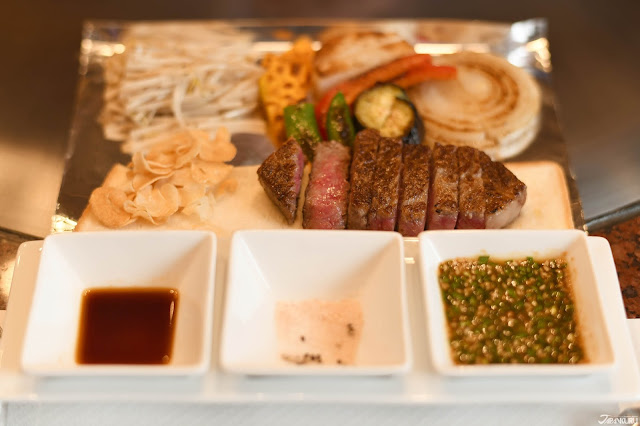 When the vegetables and steak are cooked,
they are set just like the picture above.
There are 3 seasonings/sauces for you to try the steak with;
a lightly spiced white miso base sauce, rock salt from the Himalayas,
and garlic sauce soy sauce.
It's recommended that you try the salt first,
and really we fully recommend the salt over all! 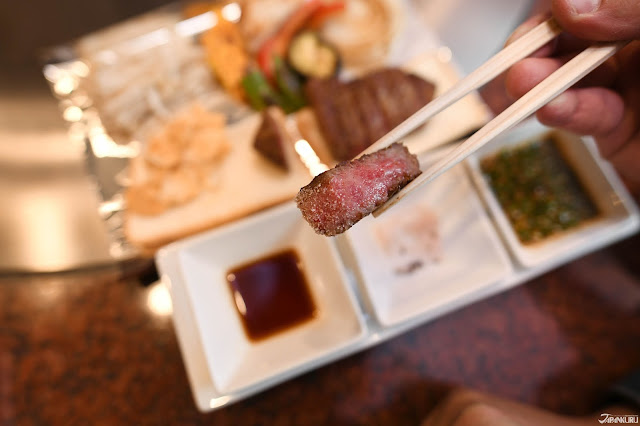 The soy sauce surprisingly had a sweet taste
while the white miso was more savory.

You can also choose if you would like rice or bread to go with your meal.

Save Room for Dessert!
This Has Nothing to Do with Kobe Beef 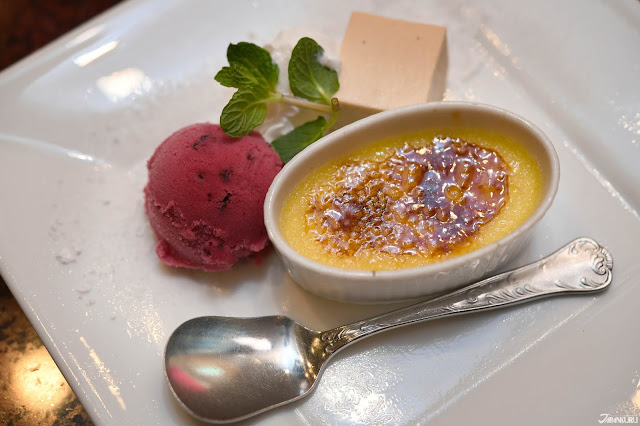 Once you finish eating the course comes with a dessert offering 3 dishes and a cup of tea or coffee (hot or cold) to go with your dessert.
・Crème brûlée
・Cassis (blackcurrant) sherbert
・Matcha mousse

It was all SO delicious!!!

Kobe Beef Teppanyaki
Who Knew It Would Be THIS GOOD!? 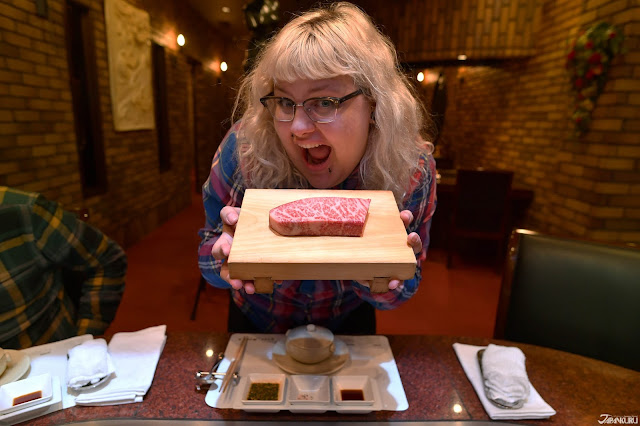 Once you try Kobe beef for yourself,
you'll never be able to forget how you felt taking the first bite.
Who knew one could feel so passionate about some beef?! hahah 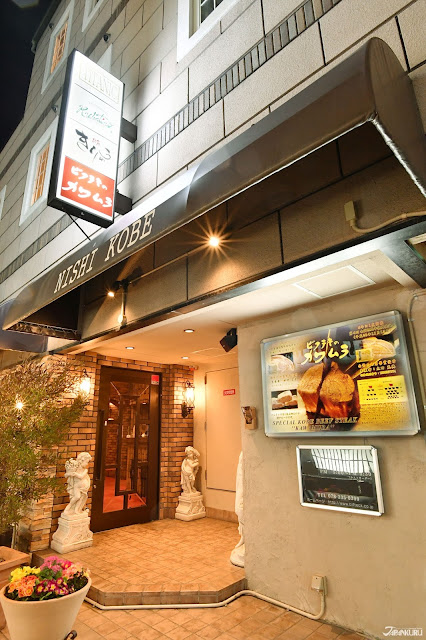 There are so many Kobe beef specialty restaurants
around Kobe Sannomiya Station,
but we really recommend Bifteck Kawamura
due to their great and professional service
and the fact that they only use the finest cows in Japan.

Kobe Beef Souvenir
Incase Your Didn't Get to Try Some 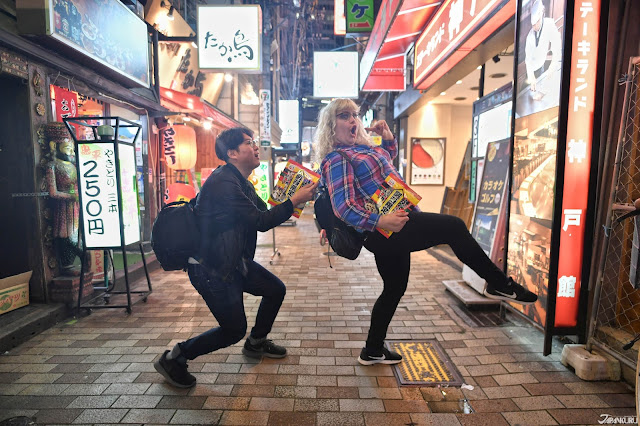 For reference,
if you want to bring the flavor of Kobe beef back home,
go to Don Quijote nearby!
There they sell limited edition kobe beef ochazuke,
a dish made by pouring green tea or broth over cooked rice,
from Japan's famous ochazuke brand NAGATANIEN.
⇩More info below⇩